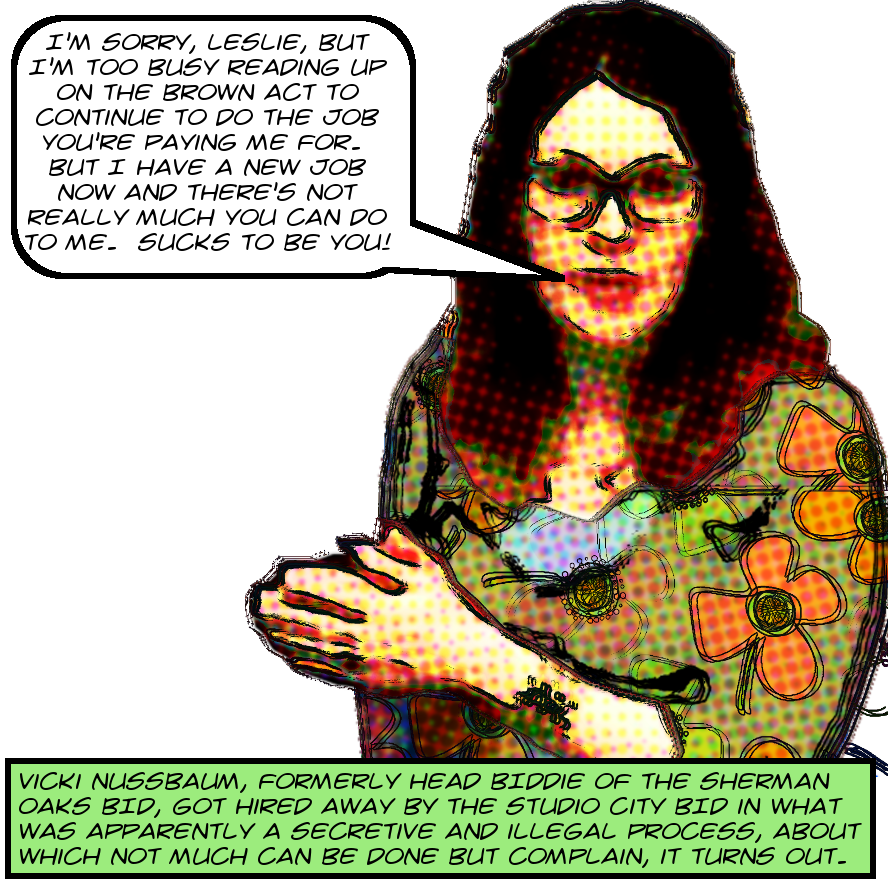 You remember last month we were still trying to figure out if the damn Studio City BID had hired erstwhile Sherman Oaks BIDdie-boss Vicki Freaking Nussbaum to replace outgoing zeck dreck Dr. John Walker Ph.D. and it pretty much looked like they had cause of some cryptic-ish emails between Vicki Nussbaum and SCBID Board dominus Tony Freaking Richman but at the same time it was kinda hard to be sure?

Well, last week, on Monday, November 5,1 the good old Studio City BID held a damn board meeting,2 and right there on the agenda, right there under item 3 was this little gem right here: “President’s Comments and introduction of new Executive Director: Vicki Nussbaum.” So out we rode,3 northwest bound on a dizzying sequence of buses and trains, to watch the meeting. And of course we filmed it for you. And of course you can watch it here on YouTube or else here on Archive.Org.4

And here you can watch Tony Richman introducing her, and here you can watch her own introductory remarks. And it’s all pretty tedious, and certainly not worth transcribing. But there’s a context, and the context makes it interesting. You see, first of all, Vicki Nussbaum is not just joining the Studio City BID, she is also leaving the Village at Sherman Oaks BID.

And you know how it is when you’re leaving a job. Your boss can email you and be all hey friend do this little task that you’re being paid to do and you can email back and be all like sorry friend I have my feet up on the desk and I’m on the clock drinking horchata and reading random websites about lemurs and what are you going to do about it, fire me? And it seems that that’s just what’s going on in this case with Vicki Nussbaum and the VSOBID President Leslie Elkans!

You see, on September 21, 2018, Vicki Nussbaum emailed SCBID President Tony Richman to ask did she get the new job and Tony Richman told her yep friend you did get it. Read that exchange here. And by October 3, 2018 she and Tony Richman were negotiating her start date. Read that email here. So by October 14, 2018, when Leslie Elkans sent this little email to Vicki Nussbaum, making a simple request, it really seems that Vicki Nussbaum was not having any of it, in her response being all like no I will not do it, I’m at home reading up on the damn Brown Act thx bye.

And turn the page for, as always, transcriptions of the emails, analysis, and some really melodramatic irony!

Are you going to send me your draft soon so I can formulate my president’s letter? As soon as I receive it, I will get right to work on the letter. I need to see it first so I know what it already contains and what it doesn’t which helps me decide what to include in my letter.

Those newsletters that BIDs put out, by the way, may look to you and to me and to other sane people as the drool-stained ravings of a bunch of six-fingered poobutts, but they’re actually really important in BIDlandia. The City’s standard contract with BIDs requires them to put out these damn things no less than quarterly. You can read all about it in the VSOBID’s contract, where section 2.6(B) states:

So they can get busted by the City if they don’t do these newsletters. Not that the City seems to have any interest whatsoever in enforcing its own contracts with BIDs, but once in a while, for reasons that evidently surpass understanding amongst the sane, the City will crack down hard and actually withhold money from BIDs to force newsletter submission. So Leslie Elkans is not just being a martinet or whatever. The BID in fact does have to turn in the damn newsletter or undesirable consequences might well ensue. And evidently it is Vicki Nussbaum’s job to write the damn thing. But she’s already gone, which is why she hit reply and noped right outta there:

I have been swamped with Street Fair and the CPRA request and phone calls about the CPRA request. I am home updating our website and reading about Brown Act. Can you write a letter about the Tree Trimming this quarter and anything else you can think about? We have the Street Plus report which includes all the day porter information as well as before and after pictures. I will use the same format as always and include all our BID services as well as a separate page inviting everyone to the Annual Meeting – this is the last newsletter before that.

I don’t think there is much else to report. Am I missing anything?

OK, got it. She was at home figuring out ways to thwart my CPRA requests5 and ostensibly reading about the Brown Act. You know that Brown Act? It’s the one that the Studio City BID violated when they decided to hire her in closed session on September 15, 2018 and then I had to write them a demand letter to which they capitulated? That Brown Act.

Oh, and not only that, but obviously they didn’t only hire her, but at some point they also determined a salary to offer her. And they offered it to her. And this didn’t happen at any open meeting, so either they did it in secret or they did it in that closed session in September. Doing such things in secret is clearly a violation of the Brown Act. But interestingly it turns out that doing them in closed session is as well. And with that, we can commence today’s lesson in open government and how not to do it. Sadly, these Studio City BIDdies are probably not reading this blog, or at least I don’t have evidence that they are.6

You see, there are some things that really cannot be kept secret from the public by these local agencies such as BIDs. And according to the Brown Act at §54953(c)(3) the salary of the Executive Director is one of those things:

Prior to taking final action, the legislative body shall orally report a summary of a recommendation for a final action on the salaries, salary schedules, or compensation paid in the form of fringe benefits of a local agency executive, as defined in subdivision (d) of Section 3511.1, during the open meeting in which the final action is to be taken.

This certainly means that a BID can’t determine the salary of their executive director in a closed meeting or by any other secret process. The salary must be determined in an open meeting. It says so right there. That is, it says so right there as long as the executive director is a local agency executive, as defined in subdivision (d) of Section 3511.1. And that esteemed section says:

(2) The person is the head of a department of a local agency.

Oh man! I can hear you sighing now. Do we gotta look up all those other laws just to find out if Vicki Freaking Nussbaum is a local agency executive? It turns out that no. Those sections just have to do with unions and schools, and BIDs aren’t unionized and they don’t run schools.7 So anyway, the executive director is certainly the chief executive officer, so the section applies, and they’re required to set her salary by action in an open meeting. Which she did not do.

And this leads us urgently to ask8 about while Vicki Nussbaum was loafing around Sherman Oaks eating bonbons and reading up on the Brown Act. Did she notice that her own hiring violated it? Or at least the part where they offered her a salary? And is she going to do anything about it?She’ll certainly get another chance pretty soon, cause that whole demand letter thing worked out so damn well I’m going to have a do-over! Stay tuned for that!

Image of Vicki Nussbaum is ©2018 MichaelKohlhaas.Org and is kind of based to some minuscule extent on a screenshot from this little YouTube friend over here, which by the way, you oughta watch if only out of pity, given that when I started in on it it had only eight views total, which is just … I’m not sure what it is, but boy oh boy is it ever something..