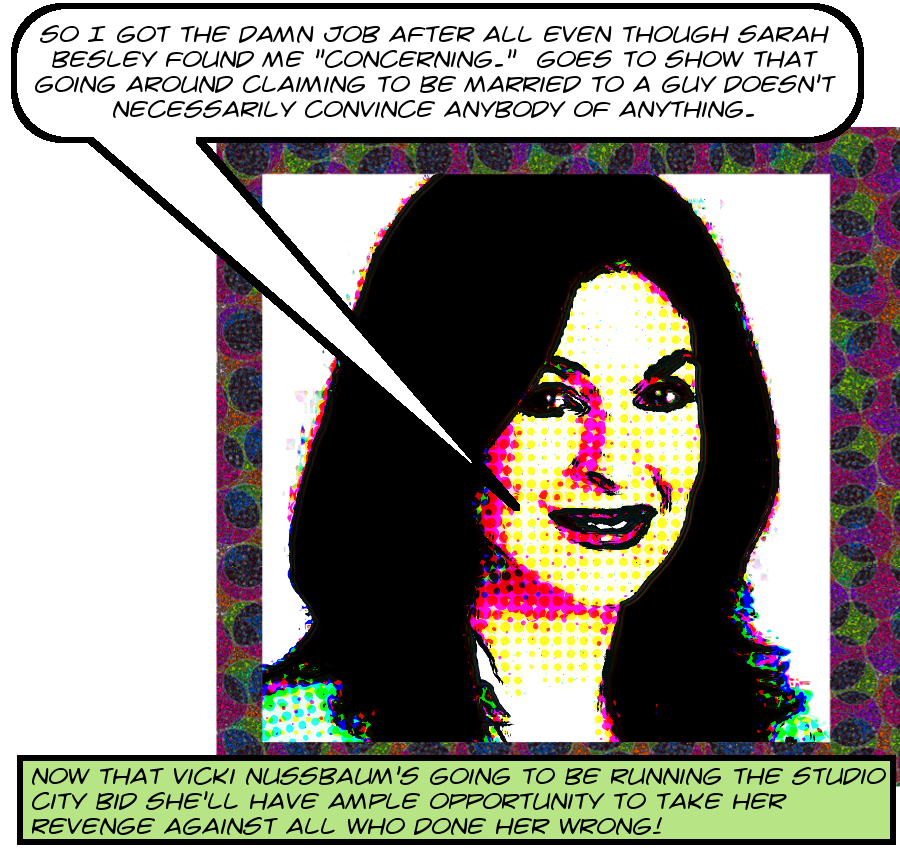 Oh Lord, see, Dr. John Walker, Ph.D., zeck dreck of the infamous Studio City BID, decided at some point that he was going to handle all my CPRA requests his own self instead of having their IT consultant do it like they had done in the past. And the evidence shows strongly that despite having a Ph.D., Dr. John Walker actually can’t carry out a keyword search of his own email. That’s one of the reasons why what was previously a steady flow of interesting material from this creepy little BID has dried to a painfully extracted trickle. But, as I have said, occasionally something interesting gets through!

Anyway, you’ll recall that Dr. John Walker Ph.D. is leaving the BID’s employ, and the two main candidates to replace him are the reprehensible Taylor Bazley and the equally reprehensible Vicki Nussbaum. Originally I thought Vicki Nussbaum didn’t get the job cause she started interviewing in June and they still didn’t seem to have hired her. But just today I received this email from La Nussbaum to BID Pressy Tony Richman making it clear that in fact she has been hired as Dr. John Ph.D.’s replacement:1
From: Vicki Nussbaum <vicki.carr.nussbaum@gmail.com>
Subject: Checking in
Date: September 21, 2018 at 7:40 AM
To: Tony RICHMAN <latonyr@gmail.com>

Checking to see how the Board meeting went Monday and if we are official.


So first, it seems that at the infamous closed session on September 17, the one where Dr. John Walker Ph.D. told me that there would be no action to report out, leading me to send the BID a demand letter insisting that they stop violating the damn Brown Act, he actually did tell an untruth. In fact, it looks an awful lot like the Board decided to hire Vicki Nussbaum at that meeting. So he’s not just a criminal, he’s a liar, it seems.

And second, it’s interesting that even though the putative wife of hiring committee honcho the ever uxorious Benjamin Freaking Besley, which is to say Sarah McPherson Besley, came out strongly against Vicki Carr Nussbaum, calling her “concerning” and claiming to know “telling” facts about her, Vicki C.N. got hired anyway! Ain’t that a slap in the face for Ben Besley and the lil lady?

Finally, everyone wants to know when is Dr. John Walker Ph.D. outta here? In fact, weirdly, even Vicki Carr Nussbaum and Tony Richman wanna know! Like Dr. Ph.D. told them he was quitting but he didn’t say when, so they hired La Nussbaum to replace him but she doesn’t know when she’s starting. Weird, eh? But true. Read the email chain here, and below find a transcription of the salient bit:

The Sherman Oaks Chamber has hired a new CEO who is ready to start after Street Fair. I have set my final day to be Friday November 16.

Let me know what the Board and John decide would be a good target start date for me. I also have Monday November 5 in the evening reserved for the Board meeting.

Looking forward to getting started!

Image of Vicki Nussbaum is ©2018 MichaelKohlhaas.Org. Take a look at this lil friend to see how vastly a LinkedIn thing can be improved!