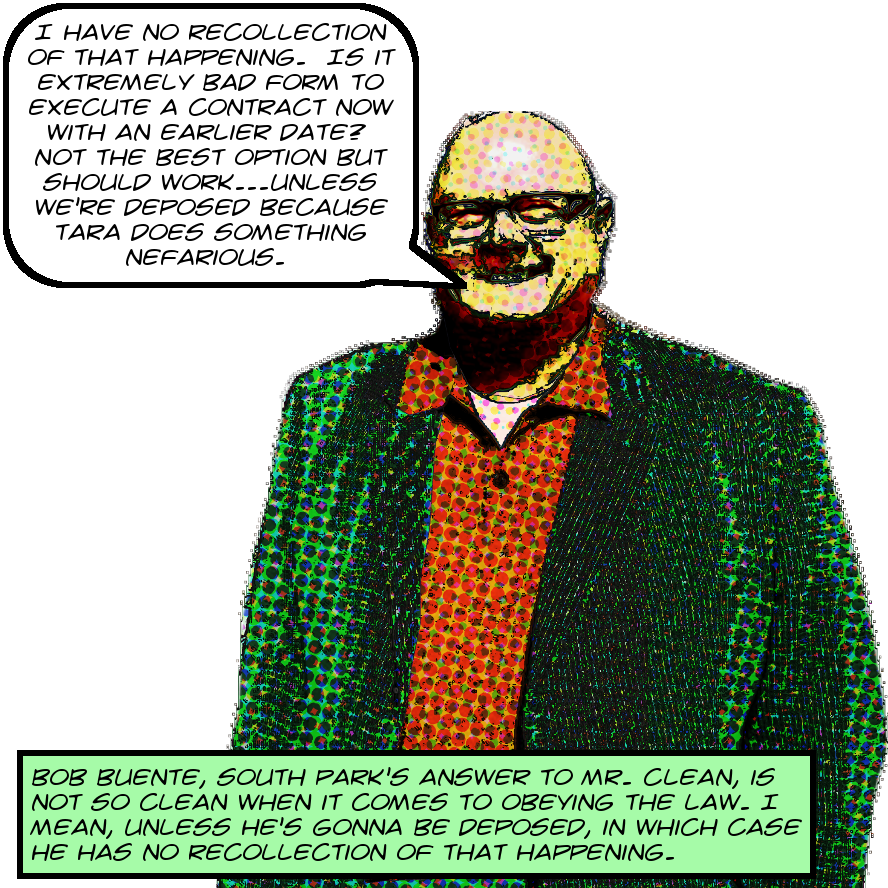 So in 2017, back when I was trying to understand Tara Devine’s BID consultancy work for the South Park BID, I sent the Parkies a CPRA request for her contract.1 At the time, twisted little minion Katie Kiefer, who quit the BID earlier this year and is now working for shockingly rapey CD14 repster José Huizar, kept telling me that the BID didn’t have any records responsive to my request. I found this impossible to believe, that putatively competent zillionaire business types would hire someone to do a job for which they’d be paid in the high five figures and not have a written contract explaining what they were expected to do.

It didn’t seem plausible2 so I assumed Katie Kiefer was playing word games with me, which was exactly the kind of crapola she was pulling at the time, all under the baleful influence of Carol Humiston, the world’s angriest CPRA lawyer, along with the rest of her 2017 Parkie buddies. You can read the whole correspondence here on Archive.Org if you’re interested.3 But now, thanks to the recent release of Bob Buente’s emails, a hyper-Aladdinesque trove of wonders provided to me by the ever-helpful Ellen Salome Riotto, current zeck dreck of the Parkers, the truth has come out and can now be explained!

I made my original request for Tara Devine’s contract on July 12, 2017. On July 13, 2017 the Parkies, hiding as usual behind their sinister masks, told me that there was no contract. And here’s where things get interesting! The next day, on July 14, 2017, Ellen Riotto emailed her executive committee and asked them if there even was a contract:

Per the CA Public Records Act, we’ve been asked to disclose our contract with Tara. The only record we have on file is her proposal, attached. We do not have a final signed contract. We looked through meeting mins to see if we could track down a board vote to approve the proposal, but were unsuccessful. Do you recall if this decision was made by the executive committee?

The attached proposal she mentions in the email is available here. Also note that if she were following the law she would have asked these BIDdies if they had the records before she told me that they did not, but there’s not much to be done about that. And with that simple request, things really went off the rails!

A few minutes later Smilin’ Bob Buente wrote back all in a tizz:

I have no recollection of that happening. Is it extremely bad form to execute a contract now with an earlier date? Not the best option but should work…unless we’re deposed because Tara does something nefarious.

Naturally the guy’s first instinct is to start forging documents. Ah, but he does see that that would link his moral, possibly even his legal, fate with Shadowy BID Consultant Tara Devine. And probably lead to his getting deposed if she did something nefarious. And of course why wouldn’t she? It’s practically her damn business model:

Fortunately for Bob “Balder Dash” Buente his zeck dreck Ellen Salome Riotto has too damn much sense for that kind of nonsense and isn’t afraid to say so:

I do think it’s poor form to do that, Bob. Curious what the others think.

And then Jessica Lall weighed in, as she was probably the ED when they hired Tara Devine and neglected to sign a contract with her:

This may have been what was formally signed – I remember going back and asking her to add the deadlines.

We don’t have anything on file with signatures. Is it safe to assume the decision to accept was made in an Exec Committee mtg?

Really, where are the grownups in the room? This BID is run by people who build infinitely tall buildings Downtown for a living. Presumably they know how to take zillions of dollars of other people’s money and turn it into a skyscraper. That can’t be easy. It also can’t be done without a certain level of competence. Like having actual contracts with one’s contractors. Like not forging backdated documents that one forgot to prepare. Like having expenditures approved by the people who must approve them rather than by no one knows who if anyone.

Especially if the contractors are, like evidently Tara Devine is, prone to doing something nefarious and getting everyone deposed. It’s shocking but sadly not atypical. And stay tuned cause this kind of crap happens every day — more than once — in BIDlandia!

Image of Bob Buente is ©2018 MichaelKohlhaas.Org and is a highly modified fair use of this lil Buente over here.