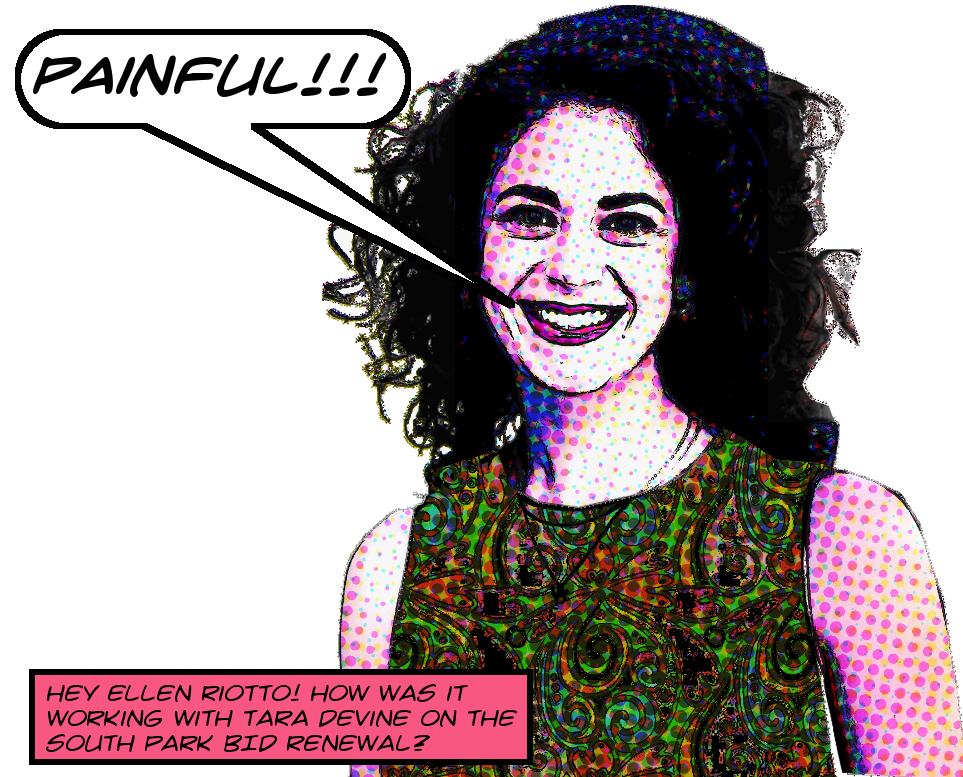 Recently I obtained a big stack of emails from South Park BID treasurer Bob “Balder Than You’ll Ever Be” Buente and posted the whole steaming heap on Archive.Org for your reading pleasure. And one thing I’m finding in the set of records is a lot of anger towards shadowy BID consultant Tara Devine, who helped the Parkers get their BID renewed last year. For instance, as we’ve already seen, Bob Buente openly declared that he was “not a Tara fan.”

And this evening, just for tricks and snuggles, I have for your sophisticated perusal yet another fine example of the South Park we-hate-TD genre.1 It seems that in May 2018 Ellen Salome Riotto, Zeck Dreck of the South Park BID, realized almost at the last moment that if the BID was going to increase assessments for 2019 they had better get on the damn case because the relevant spreadsheet was due to the City by June 1.

And, unlike the Venice Beach BID, which just went ahead and raised the damn assessments, Ellen Riotto evidently felt a need for caution, so she asked the Executive Committee of the South Park BID2 about hiring none other than Ms. Tara Devine, seemingly on an ad hoc basis, to advise on the proper procedure for jacking up everyone’s property taxes.

Just take a look at this email of May 1, 2018 where she tells her bosses all about her plan. She mentions that she has “a call into Tara” and then, perhaps remembering that no one actually likes Tara, feels the need to affirm her bosses’ feelings: “yes, I know it was painful working with her.” So why is she calling on Tara, you might well ask. It is because she, Ellen Salome Riotto, put things off for too long and now it’s too late to get someone competent: “frankly I don’t have time to find a new consultant, bring them up to speed on our BID and make decisions.”

Of course, in order to explain the fact that she’s hiring Tara even though everyone at the BID hates Tara, she has had to own up to the fact that she, Ellen Salome Riotto, is to blame for being a poisonous procrastinator. But that’s OK! You know every single one of those damn management books they sell at every airport in this country?3

They all quote that pernicious nonsense about crisis and opportunity and Chinese writing and so forth4 and then they universally go on from there to tell people to own their damn mistakes and the bosses will be super-impressed! They might even tell people to make mistakes on purpose just so they can reap the benefits of owning them. And Ellen Salome Riotto didn’t get where she is today by not reading those books!5 And that is, no doubt, why she seems so pleased with herself for closing the email with some high-powered mistake-owning: “I want to apologize for the fire-drill here. I should have entered the reminder in my calendar on April 1st, not May 1st. Lesson learned.”

As usual, it’s another tale full of sound and fury6 but it’s interesting to those who are interested, among whom we proudly count ourselves! And we’ll be back with more soonest! And turn the page for a transcription of the complete email!

It’s come to my attention that our 2019 assessment database is due to the City Clerk on June 1st. This means we need to re-run the calculations for assessments, and decide whether or not to increase (remember, the board can vote to increase assessments up to 5%). The BID has not increased assessments in two years. For a number of reasons, I do think we need to increase in 2019. I have a call into Tara (renewal consultant – yes, I know it was painful working with her but frankly I don’t have time to find a new consultant, bring them up to speed on our BID and make decisions). I’ll confirm the correct protocol with her, check in with our accountant, and then I’ll start on a proposal to the full board. We may need to call an ad-hoc board meeting in the next couple of weeks to get a vote.

I want to apologize for the fire-drill here. I should have entered the reminder in my calendar on April 1st, not May 1st. Lesson learned.