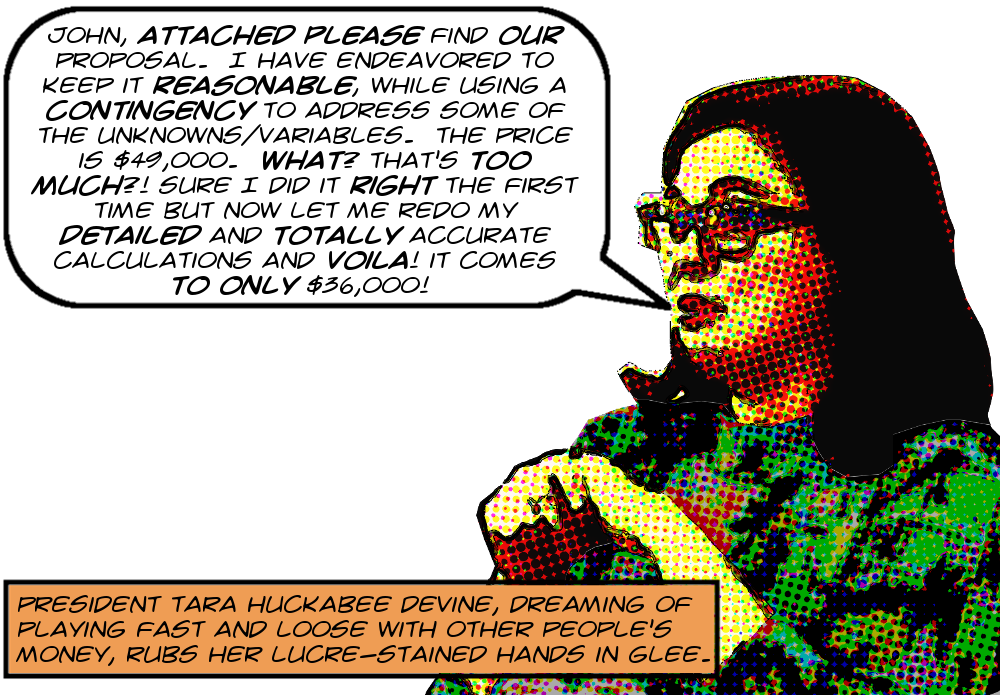 After some introductory chit-chat, President & CEO Tara Devine sent John Walker a proposal for renewal services, quoting a price of $49,000 max. John Walker was all like this is too damn much money! And in response President Tara Devine sent another proposal, and now the price was only $36,000. How is it possible to have an actual proposal for services where the price can be dropped by more than 26% just because a client complained?

Of course, the real questions that Tara Devine’s jumping bean figures suggests are first, why did the South Park BID pay her around $80,000 for their renewal, and second, how freaking much money did the Venice Beach Property Owners’s Association pay her to establish their Satanic BID-by-the-sea?

“Why” questions like the first are notoriously hard to answer, but I’m going to bet that, despite President Tara Devine’s pig-headed turned-up-to-eleven intransigence with respect to public records, the second is going to be revealed soon enough.2 Anyway, turn the page for links to the emails, some transcriptions, and the usual good humored bad attitude!

◈ September 8, 2018 — Tara Devine to John Walker — attaching this proposal. In the email, she says:

Attached please find our proposal. I have endeavored to keep it reasonable, while using a contingency to address some of the unknowns/variables.

I am available to meet with you and/or the Board if desired to discuss the proposal or further negotiate its terms. Thank you for considering us for your renewal.

And the proposal itself, well, it’s eleven pages long, chock full of the kind of self-regarding goodies that we expect from yet another masterpiece from the golden pen of President & CEO Tara Devine, but all that, the quotes from Estela Lopez included, will have to wait until later, because right now we’re talking about the money! And here’s what it says about money:

◈ September 8, 2018 — John Walker to Tara Devine — A little more than two hours later, John Walker is all like can’t afford it, Tara, plus WTF are you talking about:

Good Morning and thank you for your proposal.

I hope that you have received the correct data sheet?

As discussed earlier, I have sent out and received 3 proposals and maybe we should talk on the phone – if not later today than next week? In speaking with my associate in the office, who went through the last renewal, it sounds as if we are doing more than was required last time with Civitas? This organization received the Petition, all 222 of them completed with all materials (we will of course create the cover Letter, the Management District Summary Plan, and we already have an updated Map of our District.

You have $16,000 listed as “contingency” – and without it, your proposal would come to $33,000 – something closer to what this particular organization could cover.

We are, as you know not a large BID and although we will have all the meetings and do what is required, because we are now established the expectation is that our process will be relatively smooth (saying in the prayer position).

Please let me know your thoughts.

Attached please find a proposal that I hope reflects our most recent discussions.
Thank you for considering our firm for your District needs.

And what did this contain but yet another proposal, this one slashing the previous estimate by more than 25%:

What kind of crazy bidding scheme allows the price to be slashed by this much just on a whim? No wonder John Walker didn’t end up hiring her. Even weirder, it seems that none of the references she listed in her proposal would return John Walker’s phone calls. The references are:3

◈ September 18, 2017 — John Walker to Tara Devine — None of your references will return my calls:

I hope you had a nice weekend.

I have tried to make contact with your references and so far, nobody has called me back? I just place three more calls this morning and hope to hear from them before the end of business today or tomorrow as I would like to move forward.

And Tara Devine responds (in the same PDF as linked to above):

Thank you, John. I just sent a note to each of references letting them know you might call.

I know Estela is on a whirlwind 3-5 day trip to NYC and will be back sometime this week. I also know Steve was out Friday to take one of his kids to get settled in at college. I believe he is back today or tomorrow. I suspect that both Blair and Jessica could be at the IDA conference in Winnipeg, which was last week. Mark is in town to the best of my knowledge; he was a bit busy when I last spoke to him (last week.)

This is essentially dog-ate-my-homework-world. Who goes on a “whirlwind 3-5 day trip to NYC”? It’s not the whirlwind part that’s suspect. That’s just President Tara Devine moving happily amongst the cliches that give her so much pleasure. It’s the 3-5 days. No one goes to New York City without knowing how long they’re going for if the maximum is 5 days. Not real, President Tara Devine.

Let me start by saying I was impressed upon our first meeting and then, our follow-up conversation.

I believe we are close on the terms of your proposal however, I am unable to verify with any of the people you listed as a reference? I am not sure how to move forward as I would like to speak with an Executive Director whose BID you did a renewal on – – do I have the contact info for those people?

I look forward to hearing back.

And Tara Devine, again from the same already-linked PDF:

I’m really sorry, John. Yes, my references include a mix of renewals and formations (formations include all of the work done for a renewal, plus a lot of additional work on the front end to develop a Steering Committee, boundaries, budget, plan, research and also do greater outreach for support.)

I do know that many of them have been out of the office last week and/or Monday at minimum and several are playing catch up.

More lies, obviously. Many are out of the office and several are playing catch up. Just no. What’s happening is that they’re not calling the guy back.

◈ September 20, 2017 — John Walker to Tara Devine — Really, they’re still not calling back. Tara Devine is all like it means nothing. But it does mean something, cause this story doesn’t sound true, and not only that but she starts throwing her putative friends under the bus by claiming that they’re not organized people. Pretty sad stuff:

Thanks, John. I’m sorry for your duplicate work. I have reason to believe that the timing was just difficult for nearly all of them — who have been out and/or have been digging themselves out of a hole after an absence. A couple of them are also less consistent with communication than you and I :)

◈ September 26, 2017 — John Walker to Tara Devine — Eight freaking days later, one single reference finally called him back.4 Oh, and he talked to friends at City Hall and he can tell that Tara Devine is OCD, but so is he, so he likes it. And by the way they can only pay $30,000, take it or leave it:

I have (finally) heard back from someone, Estella – and she was very detailed in her comments.

Yesterday, I also did some outreach on my own to some friends at City Hall and was happy to have gotten their feedback as well. I have been involved with our City for nearly 12 years – – and I have been impressed with you ever since we first spoke. I can tell you are OCD and so am I.
…
Since you already have our financials and know that we provide all of the services that most bids do, there is a cap that I would be comfortable (I believe we could do $30,000, all in). As far as contingencies – and perhaps there is a reason, you are the only consultant who has included those costs so may I ask why? I’m really new to this arena and just want to understand.

And that’s where the evidence ends, and with it our narrative. As I said, they ended up hiring Ed Henning for about half of Tara Devine’s lowest price. So I guess she couldn’t take the $30,000 so she left it instead.

Image of President & CEO Tara Huckabee Devine is ©2018 MichaelKohlhaas.Org. It is derived from a screenshot from this video at this time.