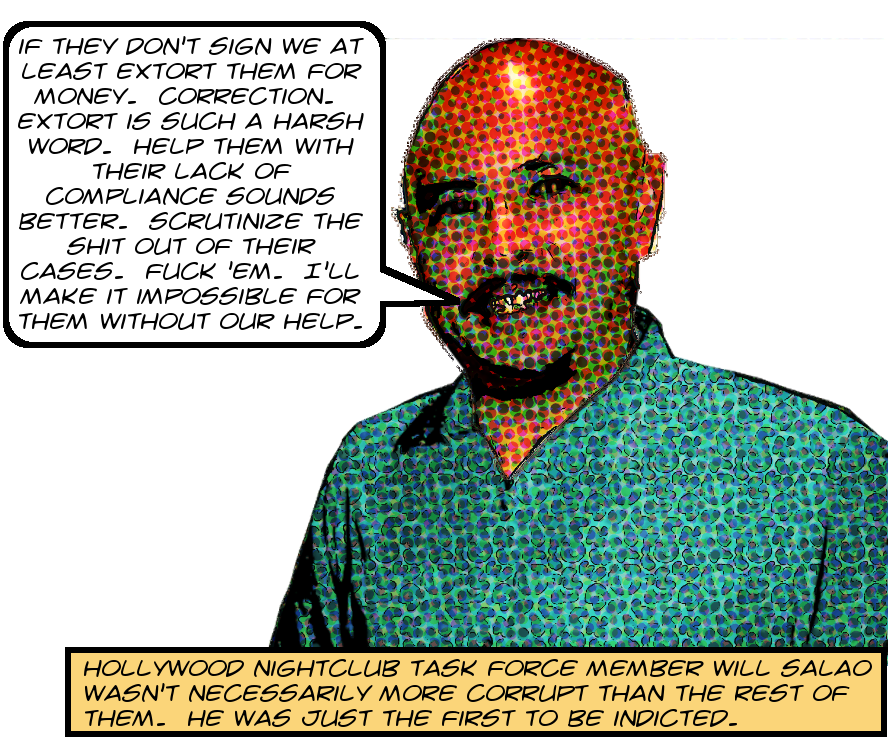 Remember the utterly and reprehensibly racist nightclub task force convened by CD13’s Daniel Halden for the express purpose of shutting down minority-serving nightclubs on Hollywood Boulevard at the white supremacist whim of Ms. Kerry Morrison? Well, if not, you can read all about it over here. And it’s to be expected that all of the participants in such a morally bankrupt enterprise are themselves morally bankrupt individuals. But nevertheless it’s still surprising when one of them actually gets indicted by the federal government for actual criminal corruption.

And yet that’s just what happened last month to Will Salao, former head of the Los Angeles office of the California Department of Alcoholic Beverage Control and former cheerfully enthusiastic member of the Hollywood Nightclub Task Force. Basically the guy teamed up with a former colleague named Scott Seo to take bribes from Koreatown bar owners to overlook violations, warn them that LAPD was going to raid their bars, send them photos of undercover vice officers, and on the other side, to pressure them to sell their bars by hitting them repeatedly with violations.

And all this at the same time, 2015 and 2016, that he was helping Kerry Morrison carry out her puritanical racial cleansing of Hollywood Boulevard. She’s so freaking focused on driving out the darkies that she’ll work with any kind of criminal at all. I really wonder if he was getting paid under the table for that too. After all, he drove bars out of business, and that’s worth money to the competition. Why wouldn’t the competition pay him for it? You can read the primary sources on this whole brouhaha here on Archive.Org.

The L.A Times published a story on Salao’s indictment a couple weeks ago, and it’s really informative and so on, but man, there are a lot of really lurid details that they just didn’t see fit to put in there, and that’s where we come in! I’m collecting all the paper here on Archive.Org. First of all, here’s a copy of the actual indictment.1 And there are endless goodies in there! The words I put in Will Salao’s mouth in the cartoon up top are direct quotes from his off-the-chain text messages to his co-conspirator, and there is a lot more where that came from! And you’ll find transcriptions of the best of it after the break!

Anyway, he seems to be out on $20,000 bail and not allowed to leave the state and to have surrendered his passport. And according to the government in the joint discovery report there is a ton of additional evidence, including video and audio. Probably we’re not going to get to see most of it, but we can always hope! The trial is presently set for December 11, 2018, but the parties have stipulated that none of them will be ready by then, so I imagine it’ll be reset.

And now, what you know you’ve been waiting for! Turn the page for the most amazing selections from the indictment, showing just what kind of fleas Ms. Kerry Morrison has exposed herself to by lying down with dogs such as Will Salao for no better purpose than closing down hip-hop nightclubs on Hollywood Boulevard!

In exchange for receiving bribes and kickbacks from defendant SEO, defendant SALAO would perform at least the following official acts in his capacity as an ABC District Administrator:

On January 9, 2015, defendant SEO and defendant SALAO had a text message conversation regarding their scheme. During this conversation, defendant SEO wrote to defendant SALAO: “Remember [Asian Persuasion] accusation cases you have to find a way to go [letter of warning] or reduce penalty. They have to see value to retain me. Or else they have to pay [petition] and our fees which will be difficult to justify.” Defendant SALAO responded: “Oh of course. That’s why we have operation knock & notice.”

Later that same day, on January 9, 2015, defendant SALAO wrote: “So my plan for the b-girl places is this: I go in with a partner in uniform. We inspect the place. We [field interview] a few girls, take photos, go over what conditions they are violating & leave. I get back to the office and send a 309 letter a week or two later. If they are represented by [Asian Persuasion], I will conditions, asking for stiff penalty. We do the same song & dance and they get [letter of warning] due to your expertise as former abc. If they aren’t represented by [Asian Persuasion] and another consultant or attorney calls me, I yell at them for violating their conditions and tell them to knock it off. Then we make a real case against them.” Defendant SEO responded: “Good plan. I like it.

On December 18, 2014, defendant SEO sent an e-mail to defendant SALAO with an attachment titled “Koreatown Karaoke List.” The attachment listed various establishments to target in an upcoming ABC enforcement operation, including Business 2, listing potential violations at each establishment, such as “afterhours,” “Dowoomi,” “B-girls,” and noting that seven of the targets “will most likely NOT retain me so make sure you put some fear into them!! This will be a great start to Operation K-Town.

On December 21, 2015, defendant SALAO, in a text message conversation, asked defendant SEO: “Wouldn’t it be nice if we could strong arm [Business 4] into selling Biz to [Asian Persuasion Coalition]?”

On March 18, 2016, defendant SEO and defendant SALAO, in a text message conversation, discussed delaying the licensing process for defendant SEO’s competitors. During that conversation, defendant SEO told defendant SALAO: The way to kill off [two competitors] is on your end. Scrutinize the shit out of their cases and delay is the key. And 309 find a way not to grant [a fine]. Give maximum penalty and make note of their clients and APC enforcement for second pop and raise the penalty. Then I send APC letter to them. LOL. We may not able to stop people from going to them the first time but we can steal them for the second violation. Defendant SALAO responded: “Ever moving parts to ktown dominance.”

On December 17, 2015, defendant SEO and defendant SALAO, in a text message conversation, discussed concealing their scheme to alter official ABC documents. During that conversation, defendant SALAO stated: “I’m still so paranoid though. I was checking ceiling tiles in the base file room to make sure there weren’t cameras.” Defendant SEO responded: “Paranoia is GOOD, that means you’re alert. Shit happens when you’re complacent.” Defendant SEO then wrote: “When you said you were paranoid about base file area I had a thought. It would [b]e funny to see base files shrink to half and you expand your garage for all APC files. Lol.” Defendant SALAO responded: “That would be great. More APC files the better the college the boys go to!” Defendant SEO then wrote: “LOL. Private.”

On August 11, 2015, defendant SEO and defendant SALAO, in a text message conversation, discussed their “ops plan,” During that conversation, defendant SEO told defendant SALAO that he found a complete list of Koreatown businesses in his Gmail account, and added “I’m slow this month so I will dedicate entire month to APC and membership to these fools. [An unindicted co-conspirator] offered to act as sales agent. Her looks will get her through the door.” Defendant SALAO responded: “Now slow down on [the unindicted co-conspirator] going door to door. We should pop them APC style first to lure them in. Then slam them with membership. Co-conspirator SALAO later wrote: “If they don’t sign we at least extort them for money. Correction. Extort is such a harsh word. Help them with their lack of compliance sounds better.” Defendant SEO responded: “I totally agree. When we meet Monday we need to seriously coordinate this APC.”

Image of hardened criminal Will Salao is ©2018 MichaelKohlhaas.Org and is fair-use-ically derived from this lil fellow here.

One thought on “Will Salao, Former ABC Honcho And Member Of The Racist BID-Inspired CD13-Managed Hollywood Nightclub Task Force, Indicted By The Feds For Shocking Corruption Including Taking Bribes In Koreatown — The L.A. Times Has The Story But We Have The Lurid Details — Not To Mention Copies Of Many Of The Pleadings”