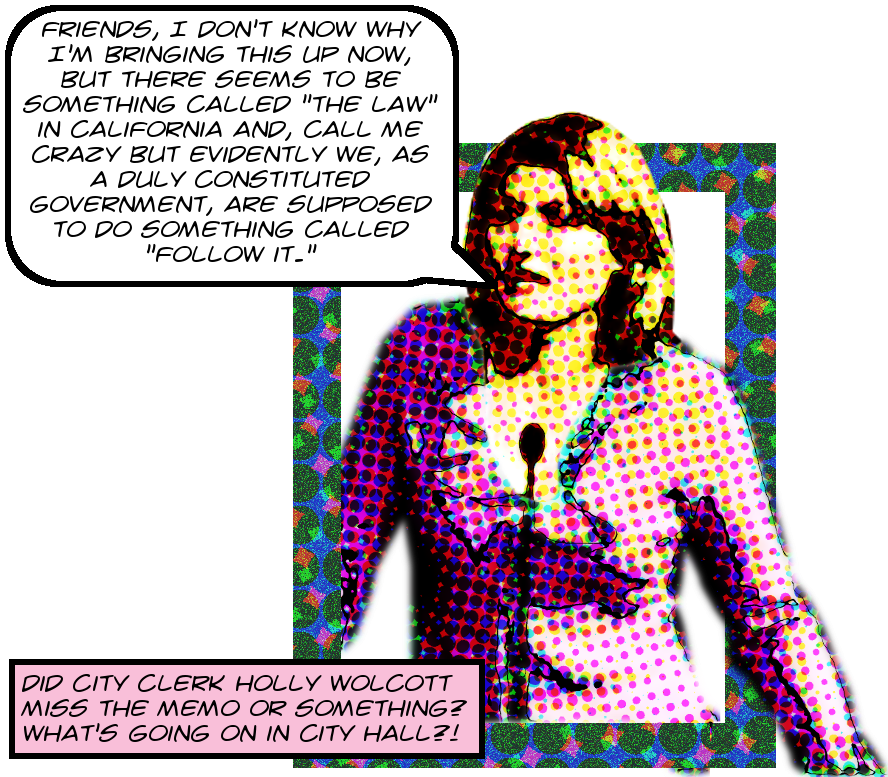 As you’re no doubt aware, the City of Los Angeles has been trying for years to put together a proposed ordinance legalizing street vending.1 The problem, of course, is that business improvement districts and other zillionaire-associated pressure groups hate street vending with a passion that is so incomprehensible, so devoid of rationality, that no one can appease them. No matter what concessions the City gives them they want more. The absolutely unhinged nature of their psychotic demands are exemplified, e.g., in this tragic tale from the Westchester Town Center BID.

In March of this year the Central City Association distilled all these lunatic demands into a concise three page document. They include, among many other things, the ability to exclude street vendors from any part of the City for no reason, the ability to confiscate their carts if they look at the BID patrol crosseyed, the ability for property owners to veto their presence for no reason, and the requirement that street vendors pay extra money to business improvement districts for the privilege of operating within their boundaries.

Now, the City Council, usually willing to do whatever BIDdies ask them to do, has had to be somewhat more circumspect when it comes to street vending because of the intense public scrutiny. The state-level Democratic Party, e.g., has taken up general legalization as a social and economic justice issue, leading to the overwhelming passage of Ricardo Lara’s SB-946 a couple weeks ago.2 But more circumspect or not, they still have to give the BIDdies some respect or they’ll cut off their access to that rich source of campaign contributions.

This is probably why the Economic Development Committee asked the City Clerk to report back on how to make street vendors who operate within BIDs pay extra fees that would go to the BIDs as, I don’t know, like protection money or something. These report-backs typically reflect the deep psychosis of this City’s zillionaires, who really seem to think that their thoughts and feelings are objectively important rather than being only contextually important, with the context, of course, being campaign contributions.3

So what a surprise it was to learn that Holly Wolcott has filed a gem of a report, which calmly and decisively explains to the City Council that actually any such fee scheme would be illegal. What?! Wolcott explicitly suggests that if street vendors in BIDs create extra costs for the BIDs the BIDs can budget money to pay for them but they cannot legally force the vendors to pay.

Holly Wolcott, pretty famously, recently flipped out over the fact that the Venice Beach BID collected far more than a million dollars for 2017 and then didn’t actually do anything at all. She schemed successfully to force the BID to refund the unspent money, and, in the midst of a great deal of personal tension between the BIDdies and the Clerk’s office, the money was in fact refunded. Perhaps this uncharacteristically non-BID-agreeing-with report-back is more of the same? I’m not sure, but it sure is welcome. Turn the page for a transcription of Holly Wolcott’s peculiarly sensible report!

COMMITTEE TRANSMITTAL: REPORT BACK ON OPTIONS TO FACILITATE THE COLLECTION OF FEES FROM PERMITTED SIDEWALK VENDORS WHO LOCATE WITHIN A BUSINESS IMPROVEMENT DISTRICT (BID)

On April 17, 2018, the City Council adopted the Economic Development Committee report instructing the City Clerk, with assistance of the City Attorney, to report with options to facilitate the collection of fees from permitted sidewalk vendors who locate within a Business Improvement District (BID), with said fees to go toward the BID’s operating costs.

In response to Instruction No. 7 of the Economic Development Committee report, several options have been discussed with the Office of the City Attorney. However, there is no provision in the State law that allows for the assessment of vending carts by a BID. Any options available are voluntary in nature and at the discretion of each individual BID.

The City Clerk, or designee, respectfully requests that the City Council and Mayor:

1. NOTE and FILE this report dated September 11, 2018, as it is provided for informational purposes only and no Council action is necessary.

The assessment of vending carts located within BIDs is not supported by State or Constitutional law which carefully prescribes the circumstances under which a property or business may be assessed and the procedures for levying assessments. Property-based BID (PBID) assessments may only be levied on the record owners of parcels benefiting from BID services. (S.H. Code 36600 et. seq., G.C. 53650,, Article XII D). Since mobile vending carts are not real property, they cannot be assessed as part of a PBID.

The formulation of a sound methodology is hampered by the transient nature of mobile food carts. The same is true for vending carts labeled “stationary”. The mobile characteristic of a vending cart is not changed by assigning it a predetermined location (stationary carts) or an area (traditional carts) because all carts must be moved in at the beginning of a shift and removed at the end.

Additionally, with no fixed locations, BIDs could potentially have great difficulty in billing and collecting from vending cart operators. The result will be a shortfall in the BID’S budget and provision of services. For all these reasons, assessing vending carts as part of an assessment district is not a viable option.

Vending cart related costs also cannot be recovered by levying a fee. There is no taxing authority to levy a fee to repay or cover the costs borne by BIDs.

A PBID may be able to increase its existing budget to add the cost of providing vending cart related services if done in accordance with State and Constitutional laws. PBIDs will be required to prepare a new engineer’s report prepared by a State certified engineer. In preparing the report, the engineer must: (1) determine the proportional special benefit to property owners from all services, including vending cart related services; (2) determine the general benefit from all services, including the general benefit to vending cart operators; and (3) separate and quantify the special and general benefits. Additional procedural requirements not specified here include providing property owners the opportunity to vote on the proposed modification. Assessment dollars may not be used to pay for the general benefit portion of a BID’S budget. It should be noted that, currently, the City pays for the general benefit amounts of all existing PBIDs.

MBIDs are not governed by Article XIII D and, therefore, the modification process is less onerous. MBIDs must comply with State law procedures for increasing assessments and Article XIII C.

Option 3: Contract for Services Between the BID and Vending Cart Operator

BIDs can enter into contracts with vending cart operators to receive payment for services provided. However, BIDs will likely find enforcing the contract(s) difficult.

There is no fiscal impact to the General Fund. If option two, above, is implemented by any PBIDs, there will likely be an increase in the general benefit amount currently paid by the City, on an annual basis.