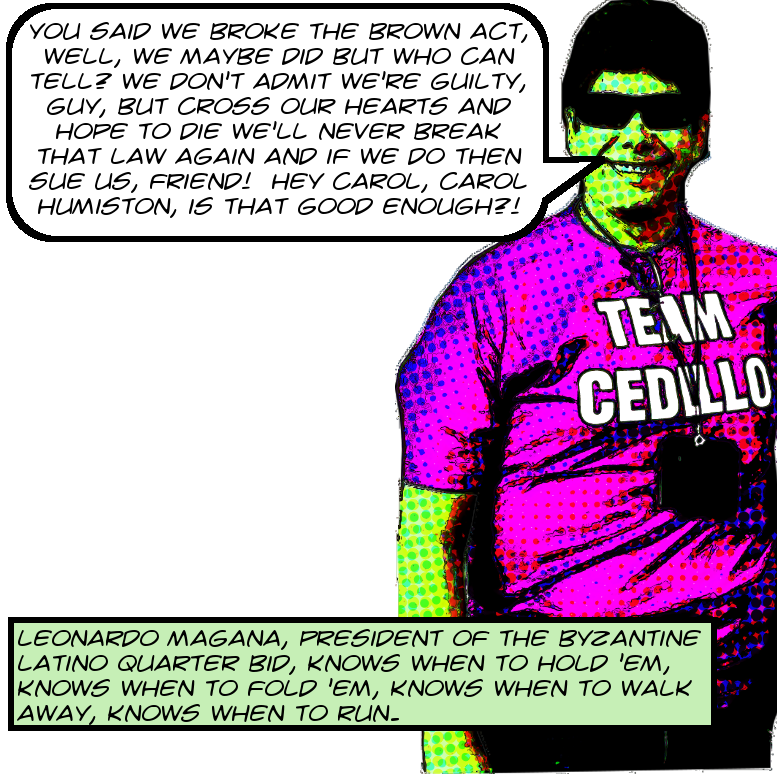 Last month, faced with an unending series of violations of the Brown Act by the business improvement districts of Los Angeles and an astonishing unwillingness of the LA County DA to do anything about it, I kicked off a private enforcement project by sending a demand letter to the Byzantine Latino Quarter BID, which had been discussing BID business in secret by email in flagrant violation of §54952.2(b).1

The process I’m using relies on the Brown Act at §54960.2, which requires a government agency, such as a BID, to respond within thirty days to such a demand with an unequivocal commitment never to break the law again or else to face a petition asking a judge to declare that they did indeed break the law.

And I was indeed poised to file against the BID if they didn’t cooperate with the process, but it turns out not to be necessary! Yesterday afternoon I received this letter, signed by BID president Leonardo Magaña, caving in to every last one of my2 demands! Of course this is by far the wisest course for the BID to take.

They’re not required to admit guilt, although they were guilty beyond any level of doubt. They’re just required to promise not to break the law in the future. Why wouldn’t they promise this given that it immunizes them from a lawsuit?

The only catch for them is that if they do violate this section of the Brown Act again I can file a petition without warning them first. And don’t worry, I will do exactly that! Turn the page for a transcription of the BID’s unconditional abject capitulation!

This letter will respond to your letter addressed “To whom it may concern.” dated August 21, 2018.

You have asserted that the BID violated California Government Code § 54952.2 by Board members communicating via email with a majority of the BID Board on May 16,2018. and June 21,2018.

In order to avoid unnecessary litigation and without admitting any violation of California Government Code § 54952.2, the BID hereby commits that it will cease, desist from, and not repeat the challenged past action as described above.

The BID may rescind this commitment only by a majority vote of its membership taken in open session at a regular meeting and noticed on its posted agenda as “Rescission of Brown Act Commitment.” You will be provided with written notice, sent by any means or media you provide in response to this message, to w hatever address or addresses you specify, of any intention to consider rescinding this commitment at least 30 days before any such regular meeting. In the event that this commitment is rescinded, you will have the right to commence legal action pursuant to California Government Code § 54960(a). That notice will be delivered to you by the same means as this commitment, to ■■■■■■■■■ ■■■■■■■■■

President. Board of the Byzantine Latino Quarter BID