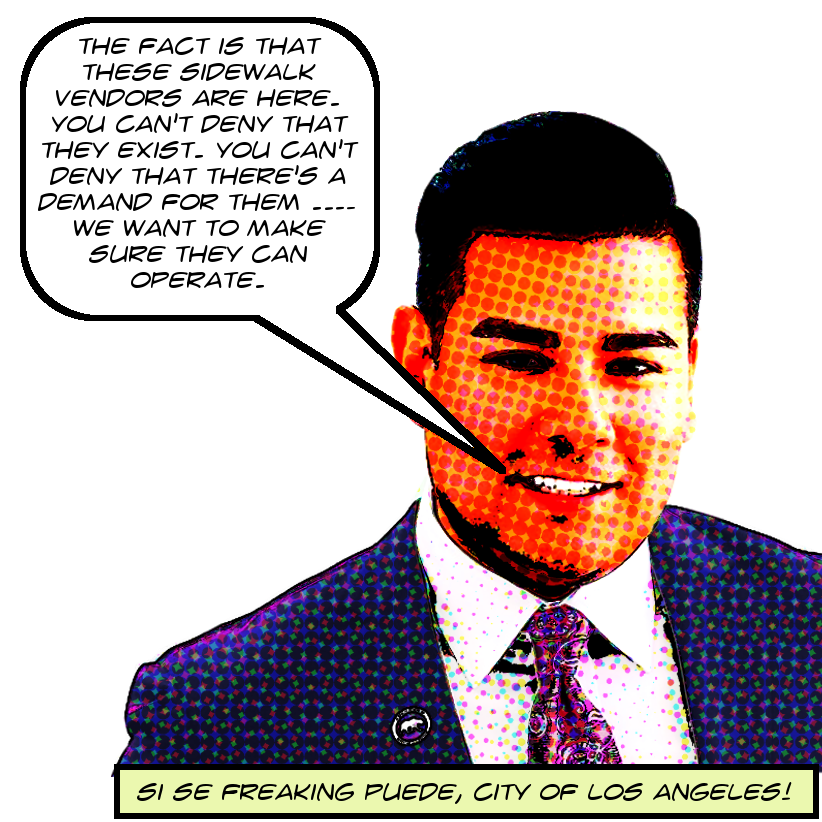 On Monday the Assembly passed Ricardo Lara’s monumental street vending regulation bill, SB 946, and sent it back to the Senate for re-approval, a step which was made necessary by some minor amendments. Yesterday, putting a successful end to a seven month legislative process, the Senate approved it 24 to 12. It is now in the hands of the governor.

This bill, if signed by Jerry Brown, will put severe limits on the ability of cities to regulate or ban street vending. In particular, it will make it impossible to ban them from certain areas without objective health and safety concerns and it will make it impossible for any city’s regulatory scheme to include approval by surrounding businesses or property owners. It explicitly defines the allowable range of “objective” concerns to exclude community animus.

These two clauses alone will radically alter the situation in Los Angeles, where zillionaires of all stripes, but especially BIDs, have fought long and hard to include them in any street vending law here probably because they’re so easily abused. This bill would, among many, many other consequential effects, overturn the City’s ridiculously specific bans on street vending on Hollywood Blvd and prohibit individual City Councilmembers from unilaterally banning vending in their districts at the behest of BIDs and other zillionaire-aligned interest groups.

Turn the page for a transcription of the legislature’s analysis of the final version of the bill.

Existing law authorizes a local authority, by ordinance or resolution, to adopt requirements for the public safety regulating any type of vending and the time, place, and manner of vending from a vehicle upon a street.

The bill would require the dismissal of any criminal prosecutions under any local ordinance or resolution regulating or prohibiting sidewalk vendors that have not reached final judgment. The bill would also authorize a person who is currently serving, or who completed, a sentence, or who is subject to a fine, for a conviction of a misdemeanor or infraction for sidewalk vending, as specified, to petition for dismissal of the sentence, fine, or conviction.

Image of Ricardo Lara is ©2018 MichaelKohlhaas.Org and has this and that to do with this Ricardo Lara here. The quote is accurate and may be found in Emily Alpert Reyes’s January 2018 LA Times article.