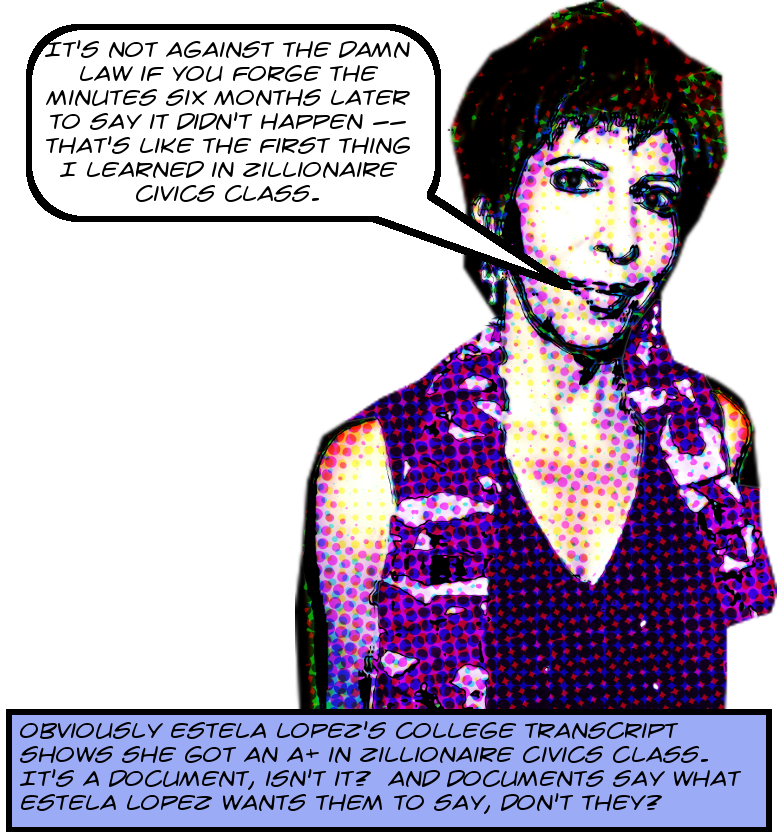 OK, in February of this year Estela Lopez introduced a motion at the Central City East Association Board meeting that wasn’t on the agenda. This is a violation of the Brown Act at §54954.2(a)(3), which states unequivocally that: “No action or discussion shall be undertaken on any item not appearing on the posted agenda.” Naturally I turned them in to the District Attorney immediately. And you might think that because the whole mishegoss was captured on actual video the DA might actually do something about it.

But you’d be wrong. It seems that the willingness of the CCEA’s lawyer to lie to the face of a deputy DA and Estela Lopez’s willingness to alter the minutes of the meeting months after the fact is enough to escape from any consequences of this violation. This kind of outcome is precisely why I found it necessary to start my own Brown Act enforcement program.

And because I have this new capability, of private Brown Act enforcement, on August 20, 2018, having heard nothing for six months, I sent an email to Alan Yochelson, who runs the DA’s Brown Act enforcement program, asking him what was up with my complaint and telling him that I would take action myself if the DA wasn’t going to do so.

On August 21, 2018 he emailed me back and said that he hadn’t decided yet but he would let me know in seven days, on August 28. Yochelson ended up talking to CCEA’s lawyer, who I think would have been Don Steier, but I don’t know for sure. The lawyer seems to have told Yochelson that he immediately pointed out the violation to the Board and they immediately revoked their illegal action.

Estela Lopez definitely edited the February minutes on August 23, which now confirm the lawyer’s version. The trouble with the story is that, as I said, I have the whole meeting on video and nothing like this happened at that meeting. In any case, these conversations between Yochelson and CCEA ended up with the DA’s office declining to take action, as explained in this determination letter, sent out on Monday.

Of course I still have the option to take action privately, and I’m in the process of evaluating that option. The section I’d use, §54960.2 allows nine months after the violation, which is November 22, 2018, to initiate the process. Watch this space for further developments, and turn the page for a more detailed narrative along with links to and transcriptions of all the evidence.

So as I said, on August 21, 2018 Alan Yochelson emailed me to tell me that he’d let me know by August 28 if he was planning to act on my complaint. At some point he discussed the matter with the CCEA’s attorney, and here’s how he described this subsequently in his determination letter of September 10, 2018:

At the conclusion of the treasurer’s report, the Executive Director spoke about a change in circumstances regarding the BID’S trash hauling contract. She reported that due to favorable conditions, the existing contract could be modified and money saved. She asked for a vote to take this action. The Board unanimously voted to take the recommended action. The item was not agendized.

We spoke with the BID’S general counsel regarding this action. He stated that the Executive Director asked for this vote although one was unnecessary. The contract in question had already been modified by staff in an administrative action that did not require approval by the Board of Directors. Counsel had temporarily left the room during this portion of the meeting and therefore was not available to inform the Board that no action was required. However, he subsequently informed the Board that the vote was “null and void due to this action representing an administrative change and not requiring Board approval.” The minutes of the meeting reflect that advice.
…
Here, the Executive Director sought a vote on an item that was not listed on the meeting agenda. However, the staff had already acted upon that item administratively. No vote was necessary and, as subsequently pointed out by counsel, was null and void. Based on our discussion with counsel, we believe this issue is resolved and that no further action is necessary.

Let’s take this jive one bit at a time. The first paragraph is an accurate summary of what happened. The second paragraph is where the problems begin:

The contract in question had already been modified by staff in an administrative action that did not require approval by the Board of Directors.

Now, the question to you is, in order for Chrysalis to take this over we would have to do a modification to their contract so that this now becomes a part of their charge. So we need to increase their contract amount accordingly to be able to get paid for this. So I simply wanted to put that out as a recommendation from staff that needs to be agreed…

Is this how she talks about something she already did? She says ” we would have to do a modification to their contract”? We would have to do something I already did, she says? As a recommendation from her that the board needs to approve? If the lawyer’s telling the truth to the DA’s office then Estela Lopez was lying to her board here about having already done it. Someone’s lying to someone either way.

Counsel had temporarily left the room during this portion of the meeting and therefore was not available to inform the Board that no action was required.

I mean, maybe. I didn’t see the guy at the table. I didn’t notice him leave. Maybe he did and I missed it. Link to the moment in the comments here if that’s accurate. But the impression created, that the CCEA has a lawyer just sitting around at the table waiting to guide the BID so that they don’t randomly break laws whose existence there’s no evidence that they’re even aware of is a false impression, even if their lawyer randomly does attend their meetings from time to time.

However, he subsequently informed the Board that the vote was “null and void due to this action representing an administrative change and not requiring Board approval.” The minutes of the meeting reflect that advice.

Yeah, right, friends. Pull the other one. Note the hedge in the use of the word “subsequently.” When was this subsequently? Not at the meeting, because you can watch the entire remaining time after Estela Lopez brings the subject up. It’s less than five minutes until they adjourn. No lawyers tell anybody anything at all. But take a look at the minutes. Here’s a PDF I exported from the original and here’s the original MS Word document that the CCEA gave to Alan Yochelson and which he subsequently provided to me. Here’s what the minutes (falsely) claim happened:

Lopez informed the Board of a potential cost-saving change affecting the BID’s trash collection budget. Chrysalis has waste hauling subcontracts for its other BID clients and based on the economy of scale this represents, Chrysalis can obtain this service at a lower cost than the BID is currently paying. This change would decrease the DID BID’s overall maintenance expenses. The Board unanimously voted to support the change, however, general counsel subsequently declared the vote null and void due to this action representing an administrative change and not requiring Board approval.

First of all, there’s that “subsequently” again. The video proves that this episode didn’t happen at the meeting, so why did she put it in the minutes if not to create an ex post facto impression that it did happen at the meeting? Also, it’s so implausible. What board would declare an unnecessary action null and void just because it’s unnecessary? Why not just ignore it? And then there’s the question of when it was put into the minutes. For that, we have to turn to the metadata. Here’s a PNG, which should also appear somewhere near this sentence. 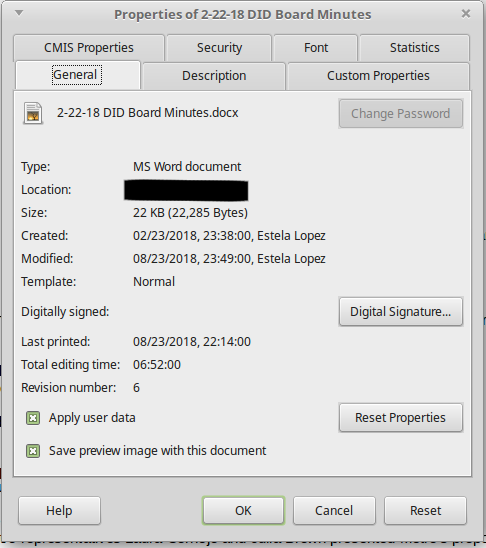 So that, friends, is how zillionaires avoid the consequences of their ignorant lawlessness. Their lawyer tells them the lie they’re all going to tell and they tell it. Because the agents of the state defer by default to the interests of zillionaires, that’s enough. But notice that in none of these communications does the BID ever admit that they did anything wrong. And it’s not actually possible to force them to admit this, but, as we’ve seen before, it may at least be possible to get them to promise never to do it in the future, whether or not they admit having done it in the past. Stay tuned, of course, for more information.