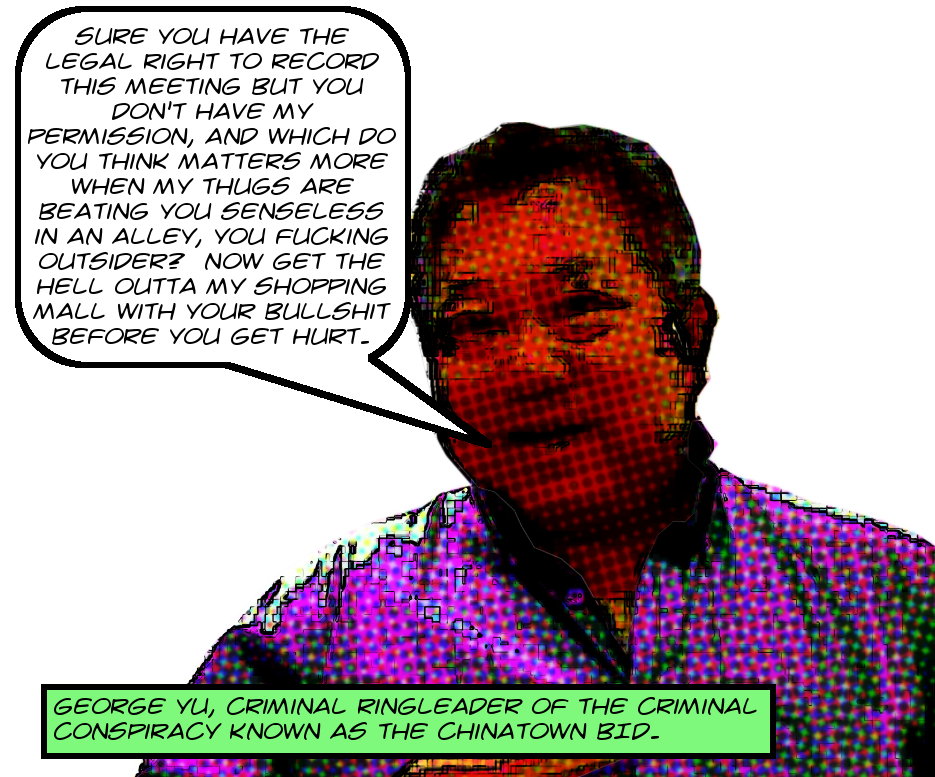 Well, it’s always interesting to visit a new BID for the first time, and today’s journey out to Chinatown was certainly no exception. The BID meets in the Far East Plaza upstairs1 so up I went. They tried to get me to sign in, but I just ignored them because that’s illegal, innit?2 I did record the meeting, and you can watch the whole thing if you want here on YouTube and also here on Archive.Org if Google gives you the willies.3

Now, a lot of other interesting stuff happened at this meeting, but I’m going to have to put off writing about it, because the very most interesting thing that happened today happened right after the meeting. As you’re probably aware, Howlin’ Rays does not actually define the the Far East Plaza, which also has some nice restaurants that are NOT overrun by zombie hipster hordes. And since the BID meeting was right at lunch time I thought I’d eat a banh mi and some pho before hopping the good old 45 southbound back to reality.

But after I ordered and before most of my food came,5 a security guard came busting into the restaurant and told me that the Far East Plaza was private property and that the owner didn’t want me there any more and that I would have to leave. Did I mention I recorded him too? Watch it here on YouTube or here on Archive.Org.6

I’ve been through a lot of crazy stuff when exercising my constitutional right to film BIDs,7 but this is right up there with the very craziest, which was the time I got screamed at for being possessed because I filmed meetings. Also, while George Yu’s argument makes some kind of sense theoretically, there are aspects to the situation that make it plausible that he can’t actually ban me from the property without some kind of reason. Turn the page for my amateur speculations on the matter!

Just for instance, consider the fact that the California Public Records Act, specifically at§6253(a), that “[p]ublic records are open to inspection at all times during the office hours of the state or local agency and every person has a right to inspect any public record…” As we know, BIDs don’t have offices, but the property owners’ associations that control them do.

The POA for the Chinatown BID is something called the Los Angeles Chinatown Business Council. According to the information that they filed with the California Secretary of State, their office is at 727 North Broadway, Ste. 208, Los Angeles, 90012. That’s the Far East Plaza. Also, don’t forget that the California Constitution at Article I, Section 3(b)(7) requires the Chinatown BID to comply with the public records act.

Clearly if property owners had some unqualified right to unilaterally and unconditionally ban people from their private property, even if there’s an office on the premises subject to the CPRA, then that constitutional right doesn’t mean much, if anything. Even if there’s a state law against trespassing the Constitution’s going to trump it.

And not only that, but the Brown Act at §54954.2(a) requires the BID’s agendas to “be posted in a location that is freely accessible to members of the public.” George Yu’s BID posts its agendas outside its office in the Far East Plaza Suite 208. If he can unilaterally and arbitrarily ban me from the premises there’s no way that the location is “freely accessible to members of the public.” So that’s a problem too. And there are certainly other problems as well, but we’ll save some for the pleadings.

In closing, though, I’d just like to note that it’s so peculiar that a fully grown adult human being, and a fairly elderly one at that, hasn’t learned to control his impulses more than George Yu. I mean, sure, he hates me and he’s used to exacting unquestioning obedience from his his weirdo criminal co-conspirators, so it makes him mad when I won’t answer him.

But hasn’t he learned, at his advanced age, that he’s only making himself even more vulnerable than he already was by acting out like this? I mean, evidently he has not, and evidently it is up to me to teach him the lesson,8 but it’s just so strange. Grow up, George Yu, you big poopy-pants whiny baby!!

Image of George Yu is ©2018 MichaelKohlhaas.Org. It’s a screenshot from the damn video, innit?