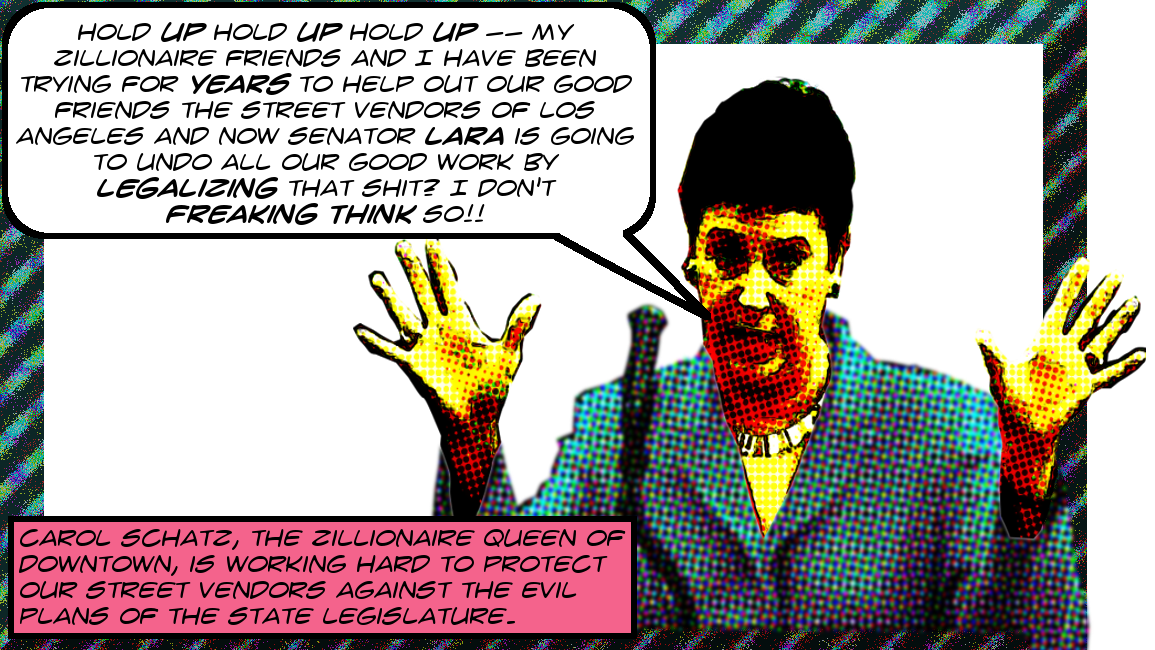 Last month I published five letters to the State Senate supporting Senator Ricardo Lara’s SB-946, the Sanity in Street Vending Bill which, by the way, cleared the Senate last week and is awaiting consideration by the Assembly. And yesterday I received 38 more support/oppose letters, and I’ve updated the Archive.Org page with copies of these.

The letters supporting Lara’s bill are excellent reading, of course,1 but, as usual, it’s the letters opposing it that really crack open the seething skulls of the zillionaire elites of this City2 and let the fevered fragments of their sociopathic ids spill out for all to see. And, of course, that’s what this blog is all about!

For whatever reason these letters, both in support and in opposition, borrow a lot from one another. And an interesting theme running through the opposition letters from Los Angeles is the idea that somehow our City’s various zillionaire-serving institutions have been working hard to help our City Council craft laws that help street vendors and that Lara’s bill would interfere with all this putative good will.

For instance, see this letter from Carol Schatz at the Downtown Center BID, of which there’s a transcription after the break:

Over the past several years, we have joined a broad coalition of organizations working with the Los Angeles City Council to create a sidewalk vending program that balances the needs of brick-and-mortar establishments with the needs of vendors.

Or check this little slab of puckey from the Los Angeles Chamber of Commerce, with contact person none other than former Huizar staffer Diana Yedoyan, evidently now shilling for the man out on Bixel Street:

The City of Los Angeles, along with stakeholders and advocacy groups, has been part of a robust and in-depth conversation around the regulatory framework for this complex new industry for some time now. The passage of this bill would bring an end to these discussions and undo the carefully crafted work thus far.

The letters are chock-full of the usual crazy. E.g. note that Carol Schatz even wants street vendors to pay BIDs for the right to vend in their districts. And of course, the very best, the most dispositive, the absolutely indisputable argument is also put forth by Carol Schatz. It’s the think of the children argument of the downtown zillionaire elite. Think of the mom and pop stores!

Should a vendor selling ice cream be allowed to set up in front of a mom and pop small business that sells ice cream and that pays rent, employs people and pays taxes?

This is especially convincing coming from the Downtown Center BID, whose district covers roughly from First Street to Ninth Street, from Figueroa to Hill. An area, you must admit, known City-wide for its abundance of mom and pop small business[es]!

The letters share an apparent and pervasive cluelessness that street vending is ubiquitous in large swaths of Los Angeles and it’s working absolutely fine. All of them share a certain flavor of blinkered zillionaire perception of the City, an idea that the few neighborhoods, the few City blocks, that they’re aware of are all that matters in this City. All these opposition letters make it abundantly clear that when zillionaires are given outsize influence over matters that they don’t understand at all, no one wins. Ultimately not even they win.

Transcription of Carol Schatz’s opposition letter from the DCBID:

The Downtown Center Business Improvement District (DCBID), the largest BID in Los Angeles, has played a pivotal role in the revitalization of Downtown Los Angeles. The DCBID opposes Senate Bill 946 which, while well-intended, takes away the ability of local government to control behavior and activity on city streets and other public places.

Unregulated street vending can have several unintended consequences that profoundly impact public health and safety and the ability of small businesses to also thrive.

The State Legislature has supported the work of Business Improvement Districts throughout the State. Property owners pay assessments to provide much needed clean and safe services. Will street vendors pay BIDs for the additional services that will be needed to clean up the areas where they are stationed? Will they provide some compensation to BIDs or the affected property owner if a customer of a vendor trips and falls due to the negligence of the vendor? Should a vendor selling ice cream be allowed to set up in front of a mom and pop small business that sells ice cream and that pays rent, employs people and pays taxes?

What if several vendors set up on a sidewalk and block ingress and egress? How will these vendors and their customers have access to restrooms, waste disposal and sufficient facilities necessary to ensure safe food handling?

These are issues that need to be addressed if there is going to be a good quality of life for all and the ability of small businesses to also thrive.

Over the past several years, we have joined a broad coalition of organizations working with the Los Angeles City Council to create a sidewalk vending program that balances the needs of brick-and-mortar establishments with the needs of vendors. We believe a sidewalk vending program in Los Angeles must include density limitations, and property or business owner consent.

Additionally, in order to have a thriving vending program there must be enforcement. This is the only way to create a level playing field for vendors who are good operators. SB 946 provides no resources to cities to support enforcement while limiting local control to create an effective vending program designed for their city. SB 946 does not provide a balanced approach to this complicated issue.

We urge the committee to oppose SB 946.

Image of Carol Schatz is ©2018 MichaelKohlhaas.Org and was created by modifying this little puppy right here.