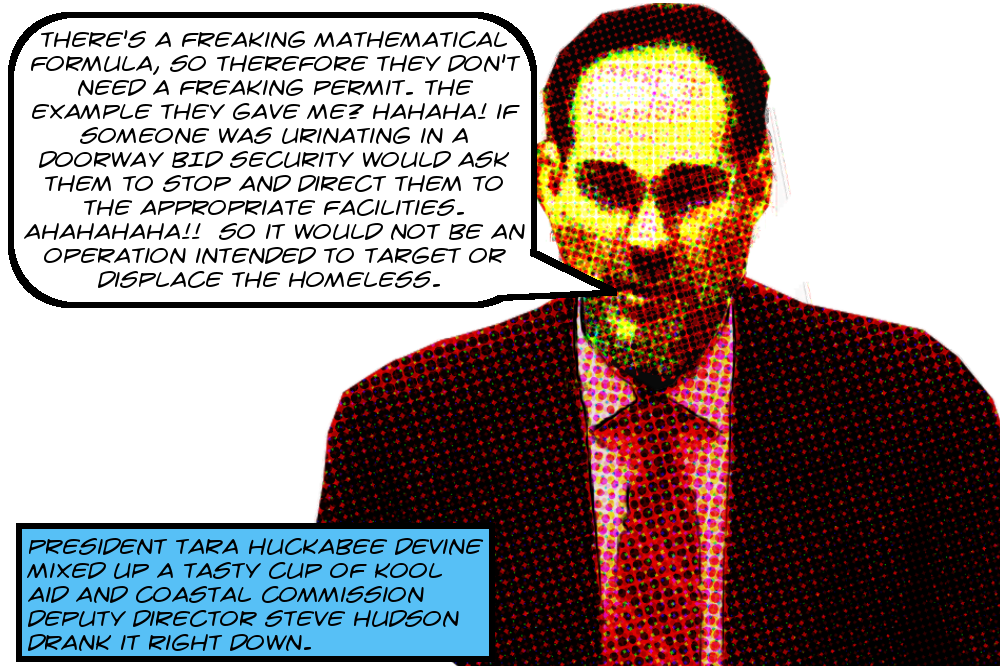 Recall that on April 11, Venice Beach BID opposition activist Margaret Molloy spoke before the California Coastal Commission, urging them to conceptualize the formation of the BID and the BID’s activities as development under the Coastal Act. Her argument was sufficiently convincing that commissioner Effie Turnbull Sanders directed Commission staff to report back on whether the BID fell within the Commission’s jurisdiction.

And at the Commission’s May 11, 2018 meeting, Deputy Director Steve Hudson did just that. You can watch his entire presentation here on YouTube, and, as always, there’s a complete transcription after the break. Mostly the guy, who’d evidently talked to boss BIDdie Tara Devine at great length, parroted BID propaganda about how they’re just going to clean sidewalks and not hire security guards, but just so-called safety ambassadors who are going to mostly give directions to tourists and so forth.

Given that the BID hasn’t actually even started doing anything, it’s pretty hard right now to expose these bogus claims as the blatant self-serving lies that they obviously are, but eventually we’ll be able to. And here’s just one example of the Tara-Devinean parrotry if you don’t feel like reading the whole speech below. In a weirdly contemptuous display of Kool Aid drinking, Steve Hudson, perhaps inadvertently, revealed much about the utter inhuman contempt that Tara Devine and her nightmare employers on the BID board have for our homeless brothers and sisters in Venice. Note that the transcribed laughter is quite real. Listen for yourself:

I spoke with the president of the nonprofit association. She indicated that these security guards and police do not target homeless or any segment of the population. They’re there to provide information, so for instance if they saw a crime occurring or, the example they gave me is if someone was urinating in a doorway they would ask them to stop and direct them to the appropriate facilities. Ah ha ha ha ha. So it would not be an operation intended to target or displace the homeless.


Anyway, Steve Hudson concluded that the mere formation of a BID in the coastal zone did not constitute development under the Coastal Act. This isn’t that surprising since there are probably dozens of BIDs in the coastal zone and what bureaucrat is going to propound a wholly novel theory with vast consequences for hundreds of well-connected zillionaires and their lackeys in a ten minute report-back?

However, and this is fairly hopeful, I think, Steve Hudson did also raise the possibility that future BID actions beyond the mere formation might … well, read for yourself:

… as we have said in some of our previous hearings, it is possible that a district may potentially carry out a development project or implement an action in the future. And we would have to assess such an action to determine if those actions could constitute development under the coastal act. For instance, a concern might be if there are security personnel that operate in such a manner that would preclude a member of the public’s ability to access the water. That meets our definition of development. That would trigger a coastal development permit.

The lesson here is that we all have to watch every move the BID makes using the Public Records Act, the Brown Act, and whatever other tools we can find. When they start restricting access to the water, and they will do it at some point because that’s one of their primary reasons for existence, collect documentation and turn it over to the Coastal Commission.

Of course, it’s not necessarily so very simple to do this. The VBBID has been ignoring the Public Records Act for years, although that’s starting to cause them some pain. They’ve clearly ignored the Brown Act as well, although there too they may suffer more than they’re prepared to pay for. Anyway, the moral I draw from the guy’s remarks are that we must keep struggling, keep collecting evidence, keep asserting our legal rights at every possible juncture against these pernicious morons on the Board of Directors of the Venice Beach Property Owners Association. And keep reading here, of course!

Image of Steve Hudson is ©2018 MichaelKohlhaas.Org and is a transmogrified visionary reworkification of a screenshot from here.

2 thoughts on “Steve Hudson, Deputy Director Of The California Coastal Commission, Reports Back On Whether The Venice Beach BID Falls Into Coastal Commission Jurisdiction — Short Answer Is Not Right Now But Maybe In The Future — Surprising No One, Steve Hudson’s Report Shows Tara Devine Is A Damned Liar”