The TL;DR is that I believe that in the course of her consultancy with the Venice Beach BID, Tara Devine qualified as a lobbyist within the meaning of the Los Angeles Municipal Lobbying Ordinance, was therefore required to register with the Ethics Commission, and failed to do so, putting her in violation of the law. If you know what all those terms mean, you may want to go straight to the complaint (Warning: 23MB PDF). For a detailed explanation of the background, though, read on!

The first place to start when interpreting any law is with the definitions. In the case of the Municipal Lobbying Ordinance (henceforth “MLO”) they are found at LAMC §48.02. In particular, we will find that the word “lobbyist”:

means any individual who is compensated to spend 30 or more hours in any consecutive three-month period engaged in lobbying activities which include at least one direct communication with a City official or employee, conducted either personally or through agents, for the purpose of attempting to influence municipal legislation on behalf of any person.

And in order to see whether this applies to Tara Devine, we need to understand the following terms:

And once we understand what those three phrases mean, we have to show that Tara Devine was paid for 30 or more hours lobbying on behalf of someone else. The details, as always, are after the break!

First of all, there is municipal legislation:

“Municipal legislation” means any legislative or administrative matter proposed or pending before any agency (as defined in this article), including but not limited to those involving the granting, denial, revocation, restriction or modification of a license, permit or entitlement for use (including all land use permits) if the Mayor, the City Council, any of its committees, any agency board, commission, committee, or general manager, or any agency officer or employee charged by law with holding a hearing and making a decision, is charged by law with making a final decision on the matter.

Just for instance, if one is going to start a business improvement district, e.g. in Venice, the City Council needs to hold a hearing and make a decision. Starting a BID clearly constitutes municipal legislation.

Next, there is attempting to influence:

“Attempting to influence” means promoting, supporting, opposing or seeking to modify or delay any action on municipal legislation by any means, including but not limited to providing or using persuasion, information, statistics, analyses or studies. A person attempts to influence municipal legislation when he or she engages in lobbying activities for the purpose of influencing a decision.

Just for instance, speaking in front of City Council in favor of the Venice Beach BID legislation is attempting to influence in this sense. However, the real kicker is hidden away in the clause that states that: “A person attempts to influence municipal legislation when he or she engages in lobbying activities for the purpose of influencing a decision.”

And to see why this is so, we need to look at the last definition, which is of lobbying activities:

“Lobbying activities” includes the following and similar compensated conduct when that conduct is related to a direct communication to influence any municipal legislation:

If you’ve been following the genesis of the Venice Beach BID, you will see right away that the whole process consists of lobbying activities so defined. Tara Devine is back and forth with City officials constantly. She advises her clients, the Venice Beach Property Owners Association, on how to get their infernal BID established, she gathers information and does research and packages it up into the Management District Plan and the Engineer’s Report and the database of owners and the set of petitions, and so on and on and on. She does press relations by by answering interview questions for Mike Bonin, et cetera et cetera. But you don’t have to take my word for it. Check out what the City’s very own BID formation guidelines have to say about the role of a BID consultant:

to organize the proponent group and business community by using statistical, research and marketing techniques and strategies including focus groups, questionnaires, telephone surveys and community information meetings; to quantify, prioritize, prepare and present a documented array of services, activities, programs and improvements including a range of associated costs; to construct a membership database of the proposed BID members; to design an appropriate assessment formula; to identify key stakeholders and recommend individuals capable and willing to serve in an Advisory Board capacity; to develop a nonprofit management entity as necessary to manage affairs of the established district including performing incorporation procedures as required; and, to package the project for delivery to the City Clerk’s Office.

Just try to find some part of that that ISN’T a lobbying activity.

And thus the last, and the most difficult, part is to prove that Tara Devine did 30 hours worth of this stuff over the course of three consecutive months. That is daunting, but not impossible. I did it by analyzing hundreds of emails and making lowball estimates of how long the work discussed in the emails would have taken. Also by counting time spent at Council and committee meetings. There’s a picture of the tabular summary below, and you can read all the details in excruciating detail in the complaint I submitted to the Ethics Commission.1 The Ethics Commission can take a long time to evaluate these things, but they seem to evaluate them really thoroughly. Also the penalties can be pretty severe. Not only can there be fines, but it’s possible for a person who violates the MLO in the right kind of way to be barred for a time from lobbying. Wouldn’t that be fun?! Stay tuned! 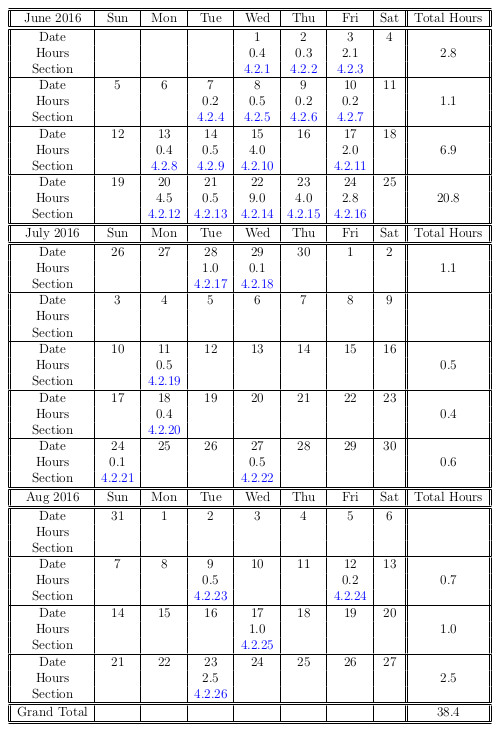 Image of Tara Devine is ©2016 MichaelKohlhaas.org.