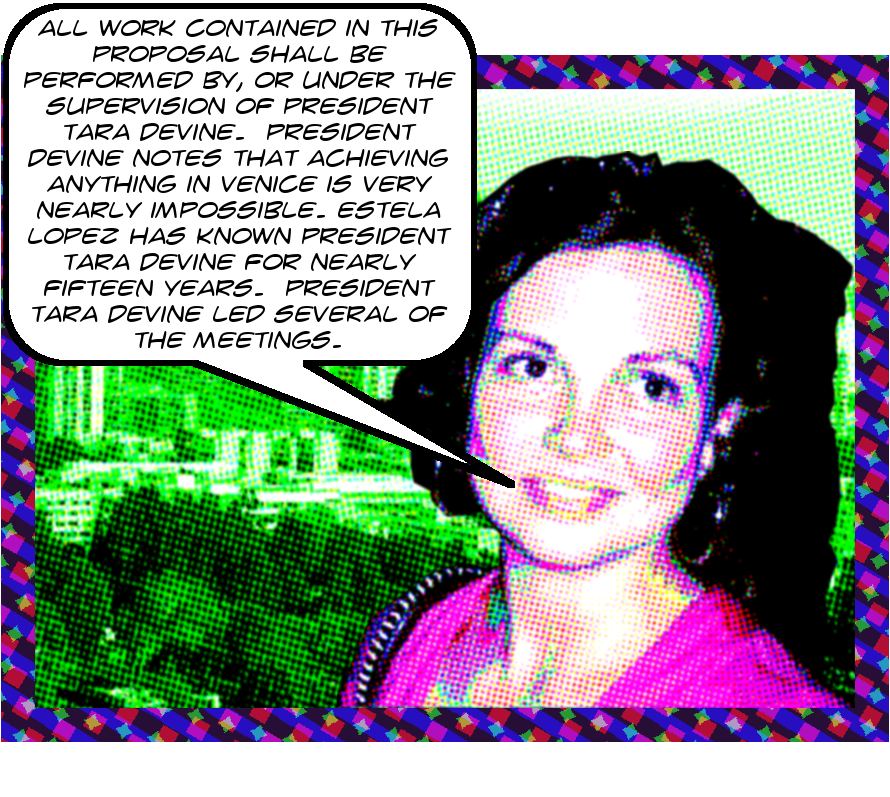 As you may recall, I’ve been studying the relationships between BIDs and the consultants they hire to guide them through the process of establishing or renewing their BIDs. As part of this work I discovered, e.g., that the Fashion District BID is paying $55,000 to FDBID Executive Directrix Rena Leddy’s former employer Urban Place Consulting for renewal services. But before the Board hired UPC they, acting as the fiscally responsible grownups they are, for whatever reason, presumed to be, solicited proposals from the City’s various BID consultants.

And, although it’s probably not such a surprise given how few BID consultants there are in this City, it turns out that famously shadowy BID consultant Tara Devine submitted a proposal! She didn’t get the job, though, possibly because her bid was almost $20,000 higher than UPC’s. And there are many things to be learned from this document, not least of which is the fact that Tara Devine, utilizing the grammatical voice known technically as “unhinged third person,” refers to herself throughout as “President Tara Devine.”1

The most important information in the document, though, has to do with the scope of services, which contains crucial information for my ongoing project of turning BID consultants in to the Ethics Commission for failing to register as lobbyists. One necessary element of the registration requirement, found in the Municipal Lobbying Ordinance,2 is that a lobbyist be employed “…for the purpose of attempting to influence municipal legislation on behalf of any person.”3

BID renewal requires the City Council to pass two distinct ordinances,4 and this fact is a key element of my my general argument that BID consulting is lobbying. But how much more effective than me arguing for this position to just have President Tara Devine admit herself, in her own words, that when a BID hires her as a consultant they are hiring her to get some legislation passed. Given this admission against interest, she’ll have a hard time arguing that she’s not a lobbyist:

Anyway, the whole document is well worth your time to read, although most of it’s merely mockable rather than substantial. Turn the page for transcriptions of some selections, including a bunch of risible testimonials from President Tara Devine’s cronies in BIDlandia and their comments, as filtered through her considerable third-person ego, about her work in Venice and elsewhere.

All work contained in this proposal shall be performed by, or under the supervision of President Tara Devine. Any work performed by any employee or subcontractor shall be reviewed and approved by the President. Ms. Devine shall serve as the primary Client liasion and shall give any public presentation requested by the Client.

Ms. Devine understands all aspects of how BIDs operate, including why they succeed or fail and how they can improve and thrive. She is a member of the International Downtown Association (IDA). She has been an active participant in LA BID Consortium meetings and has supported many advocacy efforts on behalf of LA BIDs, including several successful projects for the LA BID Consortium.

A list of our most relevant current and former client references follows.

Steve Heumann, Venice Boardwalk Association (VBA) & Sidewalk Enterprises
310-392-4687
sheumann@sidewalkent.com
Steve Heumann is the President of the Venice Boardwalk Association and CEO of Sidewalk Enterprises. Steve, together with Mark Sokol, has headed the Steering Committee for the Venice Beach BID formation effort (currently underway.) He has had a “front row seat” for the exceptionally difficult formation in Venice, where we have managed everything, including outreach and media. (Achieving anything in Venice is very nearly impossible.) Steve has also served as the administrative and fiscal lead for the formation and will be the Treasurer for the newly formed property owners’ association.

Estela Lopez, Central City East Association (CCEA)
213-228-8484
elopez@centralcityeast.org
Estela is the Executive Director of the Central City East Association, which administers the Downtown Industrial BID. CCEA is a former employer and a periodic consulting client. We most recently helped them with the renewal of the Downtown Industrial BID (2013-2014) and various public policy issues (2011-2014.) We have worked on more projects together than either of us could recall, and she has known President Tara Devine for nearly fifteen years.

Mark Sokol, Hotel Erwin & Larry’s Restaurant
310-396-8464
mark@mphotel.com
Mark Sokol is the owner of Hotel Erwin and Larry’s Restaurant in Venice Beach. Mark, together with Steve Heumann, has headed the Steering Committee for the Venice Beach BID formation effort (currently underway.) As someone who was wholly new to the process of BID formation, he can provide perspective on Devine Strategies’ ability to communicate effectively with property owners and make BID formation accessible and understandable to those who are wholly unfamiliar with how BIDs work.

The picture of President Tara Devine with which this post is adorned is ©2017 MichaelKohlhaas.Org, and I mushed it up outta this Tara Devine and this Los Angeles