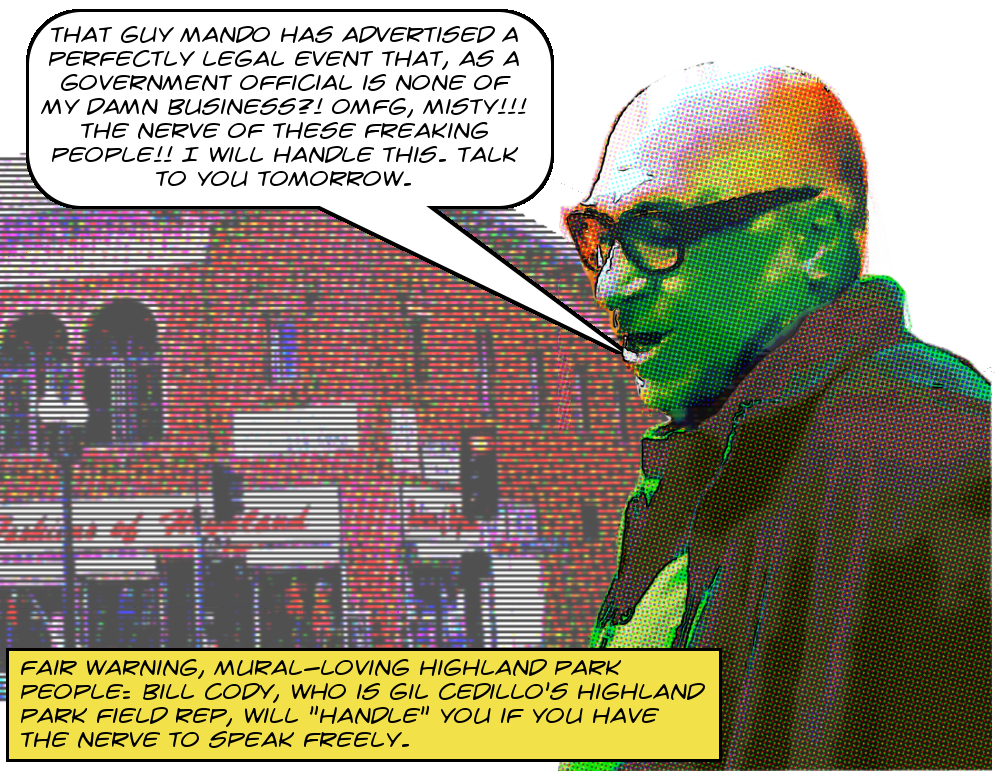 Yesterday I received another 1700 or so emails from Misty Iwatsu of the Highland Park BID in response to my public records act requests. These are available here on Archive.Org. I haven’t had time to read all of them yet, but at least two of them are really important, having to do with the BID’s well-known creepy Facebook stalking of community activists.

Here’s the short version. On November 12, 2017 someone1 sent an email to Misty Iwatsu to alert her to the fact ‘[t]hat guy (Mando) has advertised an event, “We will be having a vigil in memoriam of the murals and art that was already destroyed by Misty Iwatsu”‘. This was accompanied by a screenshot from Facebook showing a discussion about the vigil (There is a full transcription and a copy of the screenshot after the break).

Misty Iwatsu forwarded this email to three Cedillo staffers from the rep’s Highland Park field office, namely Conrado Terrazas, Jose Rodriguez, and Bill Cody. Bill Cody2 emailed his response just 64 minutes later even though it was really late at night on a freaking Sunday, with this astonishing statement: “I will handle this. Talk to you tomorrow.”

I really wonder what the heck the guy is thinking. Some people are planning to do something completely legal and they’re being Facebook-stalked over it by a City-funded zillionaires’ club who is feeling, even though the City Council has carved up the entire City into bite-sized pieces and is feeding it to them bit by freaking bit, that they’re the victims of the story so they have to email CD1 staff in the middle of the night to bitch about this vigil and, even weirder, a staffie responds in the middle of the night saying that he will “handle this.”

This is beyond bizarre in a hysterically fearful way that I’ve come to expect from BIDdies but am just starting to get used to the City’s style of response to it.3 Really, I wonder what Bill Freaking Cody would do if I emailed him in the middle of the night the next time the damn BID was planning a meeting? “HELP, Bill Cody! Zillionaires are planning to get together and conspire against human beings in Highland Park!!” Would he get right back to me with a promise to “handle this”? Don’t think so.

Anyway, turn the page for more details from the emails and another hitherto unrevealed juicy tidbit about Bill Freaking Cody!

Here is the first email again, sent on November 12, 2017 at 9:02 p.m. You can see that it’s Misty Iwatsu forwarding another email to the three Cedillo staffers listed above. The email she forwarded is from an unknown party, and says:

That guy (Mando) has advertised an event, “We will be having a vigil in memoriam of the murals and art that was already destroyed by Misty Iwatsu”

And the email also contained the following screenshot from Facebook, provided by the anonymous stalker:

This email actually contains a lot of clues. First of all, note the times in the screenshot. The last one says that the post was two minutes old when the screenshot was taken. This means that whoever is stalking these activists and reporting on their activities to Misty Iwatsu is doing it essentially in real time. Second, note how Yaya Castillo4 says that the vigil will happen “next Saturday, November 18”

Well, November 12 was a Sunday, and since Misty Iwatsu forwarded it on that day, it must have been taken on that day or earlier. It almost certainly wasn’t taken before November 11, because then November 18 wouldn’t really be next Saturday. Also, it seems unlikely that someone who’s Facebook-stalking so assiduously as to take a screenshot just two minutes after the last comment isn’t going to wait around for days to forward their work to Misty Iwatsu.

Thus it seems pretty darn likely that whoever sent that screenshot to Misty Iwatsu sent it pretty late on Sunday night. And therefore Misty Iwatsu was checking her work email pretty late on Sunday night and found this so alarming, that some activists were going to hold a vigil, that she immediately forwarded it to three of Gil Cedillo’s staffers. One of whom, as we’ve already seen, answered her essentially immediately with a bizarre promise to “handle this.”

Episodes like this one make it very clear that regardless of their public position on gentrification, which seems to be that it’s no one’s fault but it’s good for everyone if house prices go up and if we don’t like the inevitable we ought to just lie back and enjoy it, the City government is very involved in facilitating the process of gentrification.

They’re ultra-responsive to the very stupidest concerns of gentrification agents (and BIDs in general, for that matter) while they ignore or even attack people who oppose any aspect of the process. It’s reprehensible, but it’s hard to see how to solve the problem, although it’s going to start with this kind of thing.

Finally, as a special bonus for making it this far, check out this email from BID VP Stuart Rapeport. Although I wrote about it earlier, I didn’t understand the full significance at the time. The most interesting bit, it turns out, is in the metadata:

From: Stuart Rapeport <Vice-President@oldla.org>
Bcc: billcodyus@yahoo.com, James- Greyhound Bar & Grill <james@the-greyhound.com>
Date: Mon, 20 Nov 2017 16:58:31 -0800
Cc: amy <amy@futurestudio.com>, Tom Wilson <tom@duckettwilson.com>, “gustavo@oldla.org”
See how he BCCs it to Bill Cody, but not to Bill Cody’s work email, which, as noted above, is bill.cody@lacity.org. So not only is Bill Cody, who is Gil Cedillo’s Highland Park field rep, facilitating gentrification by “handling” community activism on behalf of the Highland Park BIDdies, but he’s also communicating with them with backchannel BCC emails via his personal email account. I’m not sure what it means yet, but given that a field rep’s job is to engage with the whole community, not just the local zillionaires and gentrifiers, it sure isn’t pretty, is it?

Image of Bill Cody forgetting or not caring about the Constitution of the United States of America is ©2018 MichaelKohlhaas.Org. It was made from this picture of Highland Park and a screenshot from this video of Bill Cody lying.