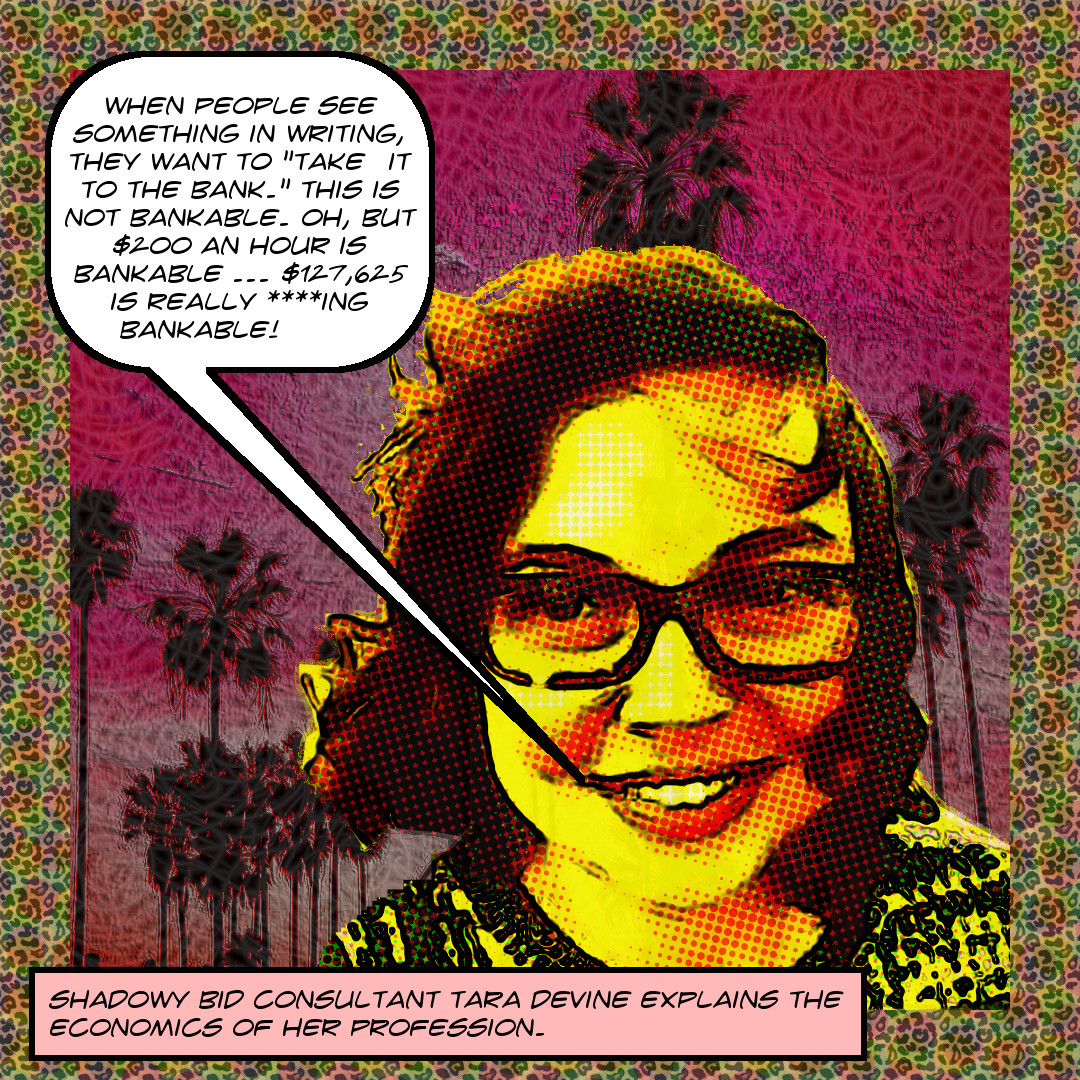 Yesterday I took a little trip South on Flower Street to the dark horse Death Star of downtown, the South Park BID, to look over some public records that they’ve been holding out on since January 2017 and only coughed up because my lawyer can beat up their lawyer.1 I found a hot mess of, among many, many problems, bizarrely damaged emails printed to PDF in random order with unintelligible OCR, missing attachments, purposely scrambled pages, and misnamed and poorly divided files. It’s going to take quite a while to put this nonsense into any kind of useful state,2 but I know a lot of my readers are wondering what’s up with shadowy BID consultant Tara Devine,3 so I thought I’d get the information concerning her up as fast as possible, even though it’s not yet in an ideal format.

That’s the big news, and you can turn the page if you’re in the mood for more detail and discussion. Note, though, that I’ll be posting about this material again once I get it revised into a more useful form. 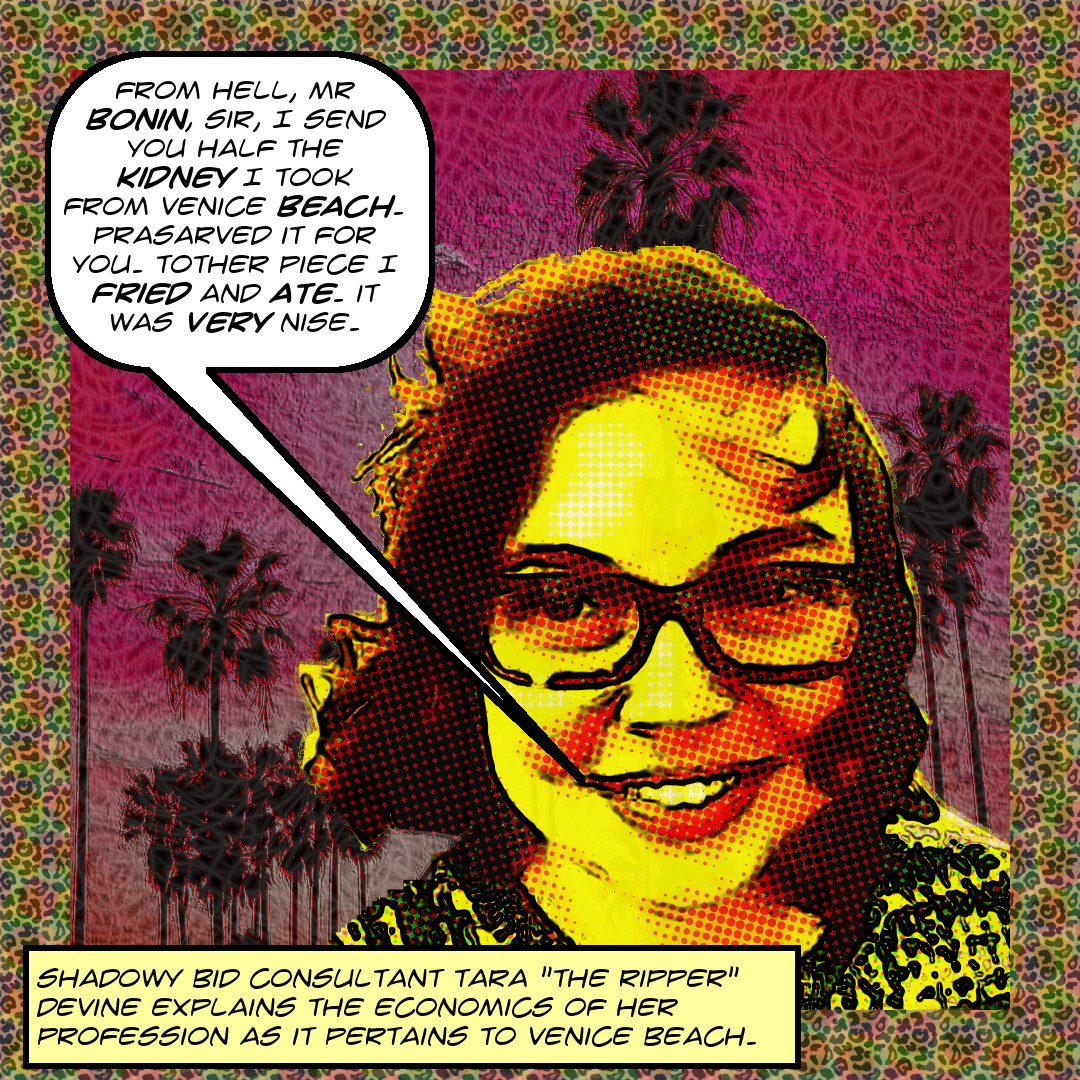 Anyway, you may recall that, earlier this year, in an attempt to discover how much the shadowy one might be getting paid for her dark and bloody work on the Venice Beach BID, I started hitting up the South Parkies for Devine materials. I found out that she seems to get paid about $80,000 per BID4 and that she doesn’t seem able to keep her mouth shut even when being recorded about how the BID is pulling the wool over the eyes of its own property owners, which is hardly surprising given the amount of wool-pulling she’s shown herself to be capable of.

However, the real grail was her invoices to the South Park BID for her renewal work. They fought hard not to give them up, at one point even claiming that my request for all invoices from Devine Strategies was too vague for them to understand. But give them up they ultimately did and here they are again (be careful as it’s a massive PDF). Recall that a lobbyist is defined in LAMC §48.02 as:

Proving the communication with the City isn’t hard in the case of BID consultants. Neither is proving that they’re influencing municipal legislation. The BID law at §36621 requires the City Council to pass a resolution of intention to form a BID and again at §36625 to pass a resolution of formation. Both of these are crystal clear examples of municipal legislation as defined in the Municipal Lobbying Ordinance LAMC §48.02:

any legislative or administrative matter proposed or pending before any agency (as defined in this article), including but not limited to those involving the granting, denial, revocation, restriction or modification of a license, permit or entitlement for use (including all land use permits) if the Mayor, the City Council, any of its committees, any agency board, commission, committee, or general manager, or any agency officer or employee charged by law with holding a hearing and making a decision, is charged by law with making a final decision on the matter.

What turns out to be really, really hard without special information, is proving the thirty hours over three consecutive months. However, with the invoices in hand it becomes trivial. Read them for yourself, of course, but to see what I mean, take a look at this one from January 2017. She bills for 122 hours between July 2016 and December 2016. That’s six months. It’s not possible to distribute 122 hours over six months without having 30 in at least one string of three consecutive months.5 And see that among the activities she’s billing for she lists her discussions with the City Clerk, which takes care of the requirement of communicating with a City official. This one PDF is essentially a successful complaint to the Ethics Commission without even needing much explanation.6

Anyway, that’s a brief outline of why this material is so very important. I’ll be putting it to a number of uses in the future, all of them bad news for the shadowy one. Stay tuned!

Transcription of the quoted email:

I just submitted the drafts to the Clerk. They are attached. Please do not distribute to anyone. As we go through review , these documents may change substantially . At this point, they almost certainly contain some errors (potentially even large ones) as well, due to their inherent complexity.

We may uncover parcel changes or corrections that will significantly affect the final budget and final parcel assessments herein. Based on my experience, owners can get upset over drafts vs. finals. When people see something in writing, they want to “take it to the bank.” This is NOT bankable. Distributing a draft , especially a first draft, is highly likely to create questions and potentially headaches for both of us.

I ended up having to move a lot of things this week to be available for this. Now I have to pay the price for it. So please bear with me as I will be out of the office on Friday and the first half of Monday for a mix of client and personal appointments, and also stare down another client deadline for Tuesday.

Some tiny fraction of the pixels in the image of Tara Devine began their lives embedded in this photo from her LinkedIn account. The resulting mess, I’m proud to say, is ©2017 MichaelKohlhaas.Org. The words in her mouth in the second version are a paraphrase of the famous From Hell letter.