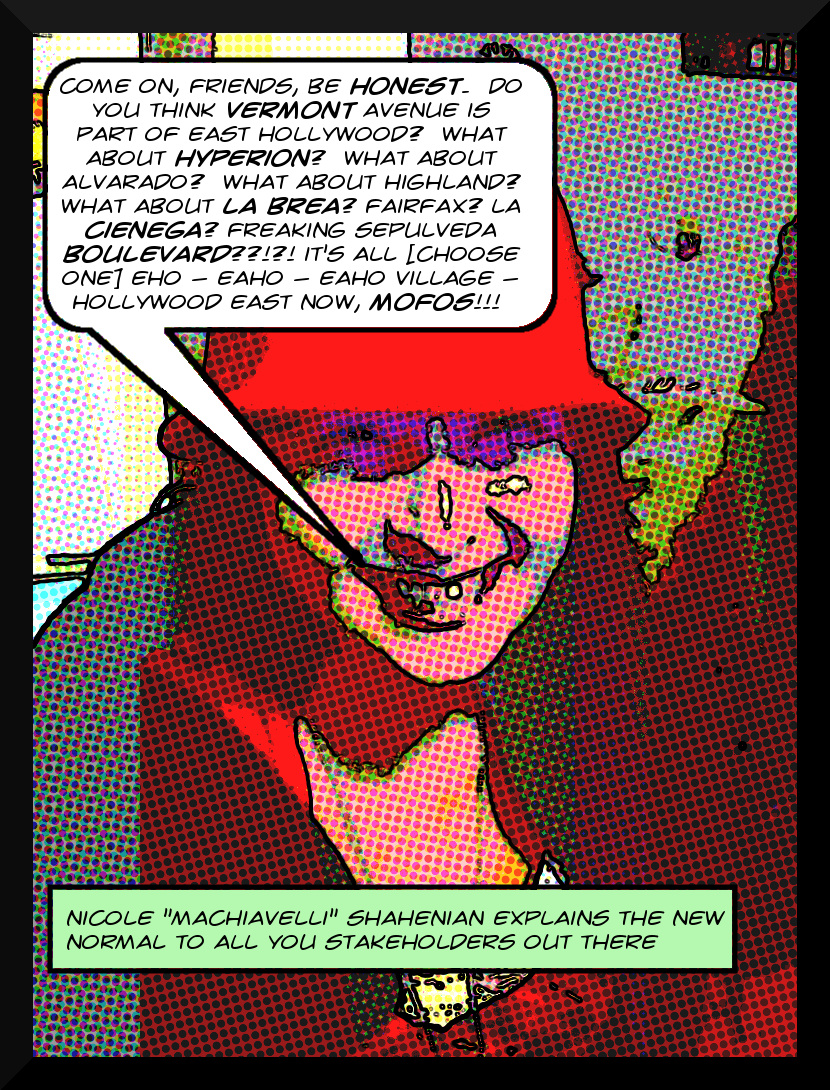 However, it is well-known that rust never sleeps and neither do freaking real estate boosters. Thus it’s certainly no surprise to find that the good old East Hollywood BID is moving on up with its plans for the grand East Hollywood rebrandarama. They have a freaking Survey Monkey up! And, at least for now, you can take the survey! And enter to win a Starbucks gift card!! For Fifty! Freaking! Dollars!! Turn the page for your chance to WIN WIN WIN!!!
END_OF_DOCUMENT_TOKEN_TO_BE_REPLACED

People often ask us what the hardest thing about writing this blog is. It’s not pestering unwilling politicos for documents the publication of which will, if such a thing were possible, shame them before the world. It’s not attending and filming the public meetings of the BIDs and watching angry white people spitting and hissing at the world they think has done them so very wrong. It’s not thinking of nasty things to say about them. Lord, it’s not even resisting the temptation to say all the very, very nasty things we think of when confronted with them.
No, none of these. Right at this very moment, the hardest thing about writing this blog is stopping ourselves, all three of us, from running out onto the street, grabbing random people by the collar, and forcing them to read Kerry Morrison’s latest blog post on Hollywood homeless people, to subsequently acknowledge just how completely freaking batshit insane it is, and finally to join us in drinking ourselves rapidly into a stupor sufficiently deep to erase the last traces of this febrile outpouring of dangerous delusions from our long-suffering minds. We’re not doing any of that because we’re writing this essay instead, but we make neither promises nor representations concerning what we might do when we’re done with it.

Anyway, as usual, we’re going to mock this nonsense one piece at a time, with Kerry’s words in blue. The links are Kerry’s.


As we inch toward Labor Day, I realize that this summer will be characterized by the one issue that has dominated my attention: the increased evidence of homelessness in our city. Every day has involved phone calls with stakeholders, ad-hoc community meetings, or city and coalition task forces evaluating the factors at work and the solutions in play. So many people have suggested that we are in the midst of a new trend – a sea change of sorts – because what we are seeing does not resemble the face of homelessness five or ten years ago.

We’ll give her the first sentence. It’s even possible that it’s true that complaints about homeless people have dominated her attention. We’ll even give her the tacit condescension of a link to Wiktionary paired with the awkward little “of sorts” surrounding Ariel’s beautiful and much abused notion of a sea change. But pay close attention to her claim that what we are seeing does not resemble the face of homelessness five or ten years ago. Surely we’re going to see some evidence for this!
END_OF_DOCUMENT_TOKEN_TO_BE_REPLACED