A few weeks ago, Rory Carroll published an excellent article in The Guardian on how the City of Los Angeles has used gang injunctions as a tool of gentrification in Venice. Of course, this is not news to anyone who’s been paying attention since the injunction began in 2000. Even at the time it seemed clear that the injunction was a response to the wave of gentrification that began in Venice in the late 1980s and underwent unprecedented acceleration through the 1990s. Of course, everyone who’s smelting gold out of the housing stock of Oakwood in a blast furnace fueled by the burning bodies and lives of the poor people, the dark-skinned people, fed into the hopper by the LAPD, denies this every which way.

And these arguments have been repeated so often I have nightmares about them. “The cops would never ever do such a thing.” “There’s no conspiracy to chase out darkies.”1 And so on and on and on. But Venice’s own muse of slavering psychopathy, the very king of the gentrifiers, the universally acknowledged whitest man in Venice, Mark Ryavec himself, has distilled all of them, every last threadbare tin-foil-hat characterization, into one bitter pithy little ball. As Rory Carroll puts it:

For Mark Ryavec, head of the Venice Stakeholders Association, the notion that police act as gentrification agents is “a bunch of radical bullshit”.

Well, first of all, it’s not actually bullshit.2 The arguments against the idea that the City uses the LAPD to promote gentrification are mostly based on the (probably) factual assertion that (a) the City never mentions gentrification as a purpose for the gang injunctions and (b) that the assertions they make in support of the injunctions have to do with very real problems of violent crime (real at the time when the injunctions are being sought, anyway). There are a number of problems with this line of reasoning.
END_OF_DOCUMENT_TOKEN_TO_BE_REPLACED 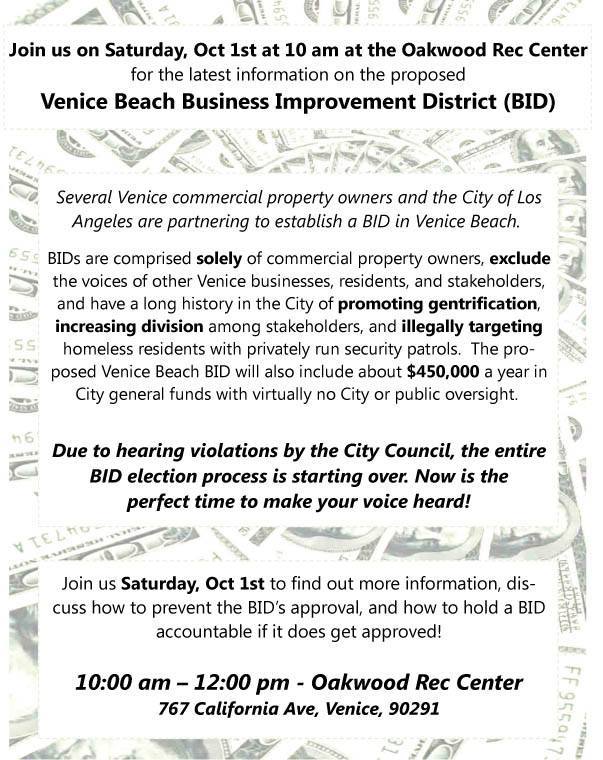 On Friday, July 1, the Mayor of the City of Los Angeles signed an ordinance of intention to establish a Venice Beach BID. It seems that this isn’t final, and there will be a hearing on August 23, 2016 at 10 a.m. “to determine whether to establish the District.” Please mark it on your calendars and come put the integrity of our City Council to the test. After all, if 169 signatures below one of the most eloquent anti-BID statements I’ve ever had the good fortune to read didn’t sway them, I don’t imagine that a huge public outcry will do much. But that’s no reason for remaining silent.

You can read a description of the boundaries of the proposed BID in the ordinance, although it’s a little hard to follow even for someone who grew up out there. The District seems to be bounded roughly by the Boardwalk on the West, by North Venice Boulevard to the South, by Pacific Avenue to the East, and by Rose on the North. Now, I don’t know how much you know about the history of race relations in Venice, but it’s essential to an understanding of the deep politics of this BID1 to know that the area roughly bounded by Electric Avenue, North Venice Blvd., Lincoln Blvd, and (maybe) Brooks Avenue, known as Oakwood, was originally the only area of Venice that non-white people were allowed to own property in. Thus ownership of commercial property in the area encompassed by the proposed BID, like most such areas in Los Angeles, was restricted to white people only until sometime in the late 1960s, and then only as a matter of law. There is no question that the huge majority of that property is, even now, due to the way that commercial property is passed down in families, owned by white people.
END_OF_DOCUMENT_TOKEN_TO_BE_REPLACED