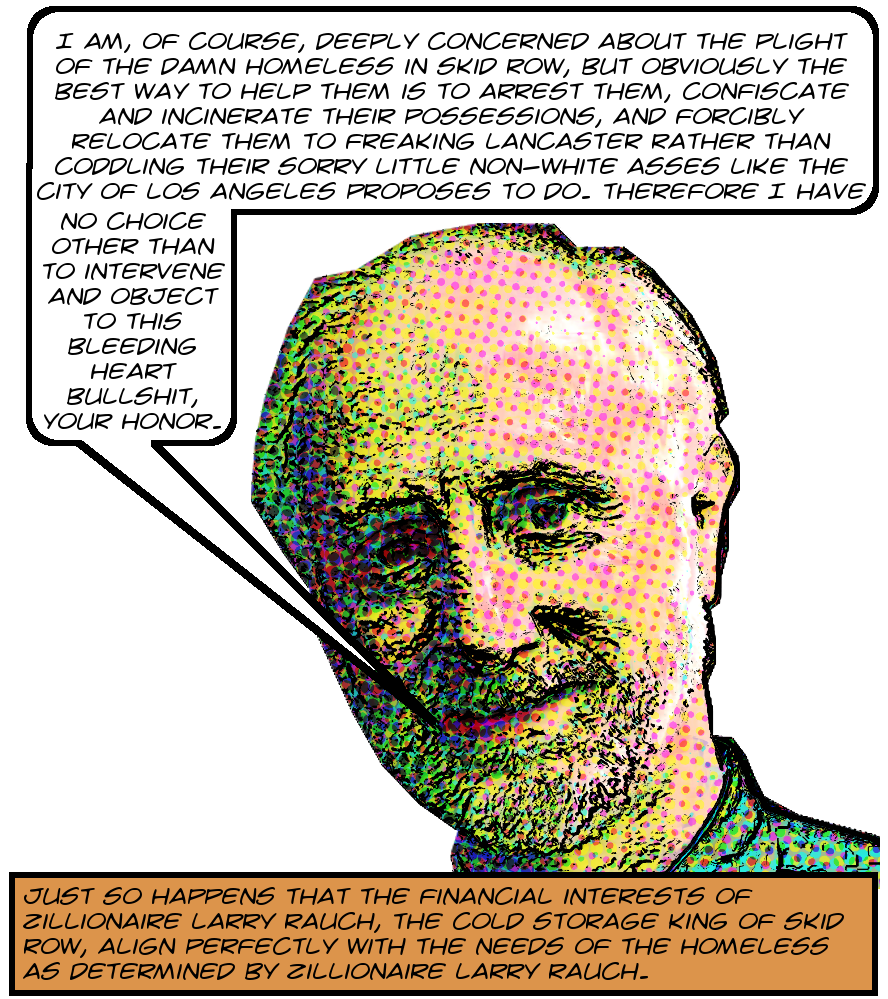 In March 2019 the Los Angeles City Council voted to settle Mitchell v. City of LA, the monumental federal civil rights case over homeless property rights. The impending settlement has inspired an astounding amount of delusional ranting from zillionaires and their willing minions over the last year or two, including this unparalleled slice of whatever-it-is from the CCALA. And no one listened to them, although the Daily News, which, it’s true, is not exactly Der Sturmer but, it’s also true, is not exactly not Der Sturmer, did publish this pandering slab of nonsense from Councilmember Joe Buscaino, one of two to vote against settling.

And a few weeks ago all these zillionaires got together and filed a motion with the court hearing the case, presided over by James Otero, asking for permission to intervene for the purpose of objecting to the settlement, a story covered by no one, it seems, other than the Daily News. There are transcribed selections below. And I don’t really know enough to be able to comment on the motion, other than to say I have mixed feelings.

That is, the people seeking to intervene are certainly fascists and liars. They mix incredibly disingenuous claims about their love and compassion for all humanity with lies about disease and advocacy for extreme oppression of homeless people. They actually cite the actual freaking Daily Freaking Mail in their brief. They lie about the levels of crime, of violence, they cite Drew Freaking Pinsky as if he were anything more than a lying hack himself. If they’re given a free hand to set policy they’ll deport homeless people, even housed poor people, off to the desert to live in camps, bleating the whole while about how they only want the best for their victims.

On the other hand, I do agree that their interests, as abhorrent as they are, aren’t adequately represented by any of the parties to the case, and I do agree in general that there are such circumstances in which people ought to be able to intervene in court cases when that happens. And I also agree with them that the fact that the City Council deliberated on the settlement in closed session is antithetical to democracy. So I’m going to leave the commentary up to the only person whose thoughts really matter, and that’s Judge Otero. The parties’ reply briefs are due tomorrow and I will publish them here if any are filed, which I imagine they will be.
END_OF_DOCUMENT_TOKEN_TO_BE_REPLACED 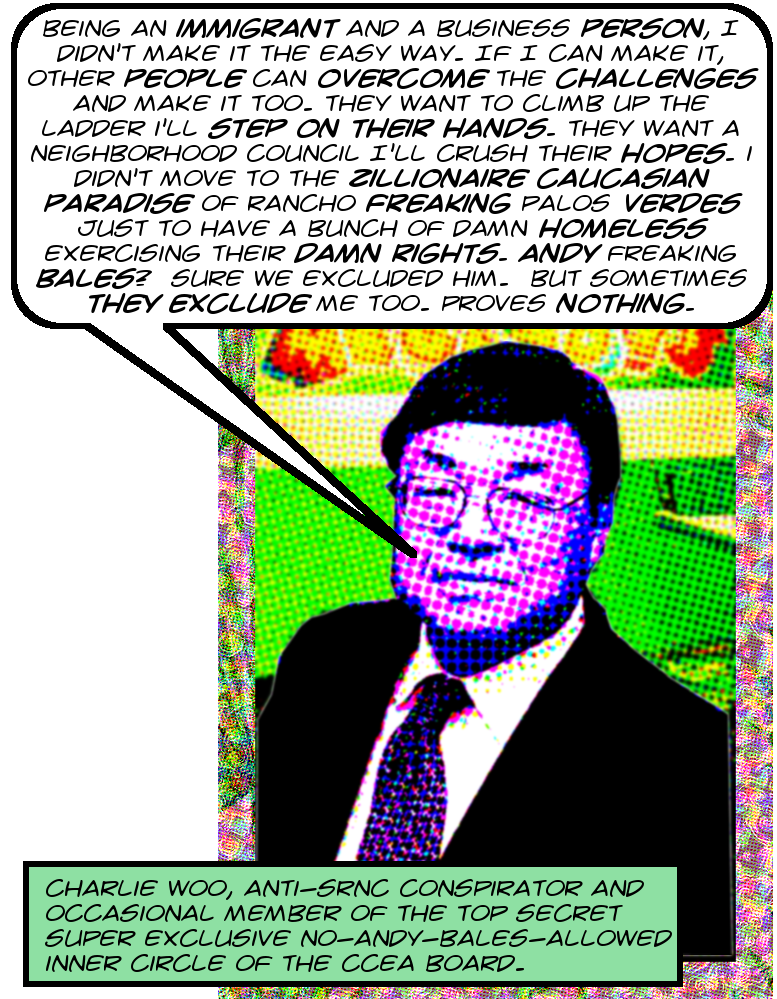 However, there is still some interesting information to be gleaned from this release. In particular, the fact that Estela Lopez was involved in extensive secret email discussions with 9 out of 12 CCEA directors, excluding Andy Bales, Richard Gardner, and Sylvia Kavoukjian, was in fact not an anomaly. It seems that she habitually sends emails to everyone but those three.4 I have no idea at this point why those three directors are excluded on a regular basis. Perhaps someone more up on Downtown politics will be able to figure it out. Anyway, turn the page for some examples, some discussion, and some mockery of Don Steier, the CCEA’s lawyerlike co-conspirator.5 END_OF_DOCUMENT_TOKEN_TO_BE_REPLACED 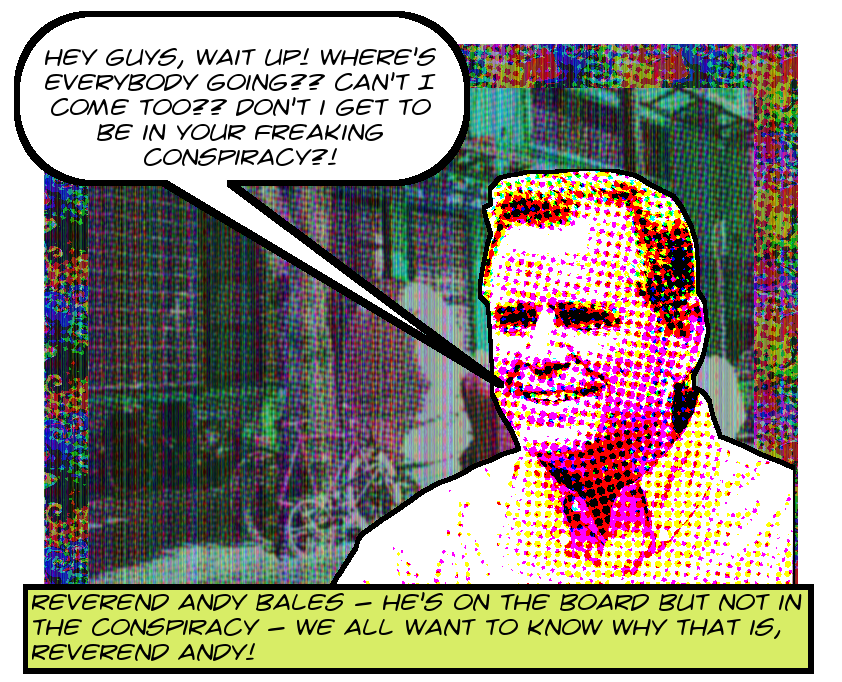 Keep that in mind the next time you hear a bunch of BIDdies bitching about crime Downtown and turn the page for the evidence and a detailed analysis of the violation!
END_OF_DOCUMENT_TOKEN_TO_BE_REPLACED

This story begins with the fact that the Central City East Association, which runs the infamous Downtown Industrial District BID, contributed $700 each to two City Council candidate campaigns in 2015. The money was given to Mitch O’Farrell of CD13 and Marqueece Harris-Dawson of CD8. You can see the record at the City Ethics Commission and also if it’s more convenient, here is a PDF of the same information.

This turns out to be a huge problem for a number of unrelated reasons. First and most simply, the CCEA is a nonprofit 501(c)(6) organization. Unlike the more famous 501(c)(3) organizations, 501(c)(6) groups are allowed to engage in lobbying, but it’s unclear whether they’re allowed to support candidates for office.1 However, irrespective of any restrictions on donations, there are very clear reporting requirements.

Take a look at the CCEA’s 2015 tax form. In particular, take a look at question 3 of part IV, found on page 3 of the form. It asks unambiguously:

Did the organization engage in direct or indirect political campaign activities on behalf of or in opposition to candidates for public office?

And, as you can see in the image that appears somewhere near this paragraph, the CCEA unambiguously stated that they did not. It’s hard to imagine a less ambiguous form of direct political campaign activities than giving actual money, amirite? Hence I turned them in to the IRS and also to the Franchise Tax Board for this lacuna. Stay tuned in case anything happens!

And it turns out that there are some more subtle, but potentially equally serious, problems with these two donations involving various municipal laws. Turn the page for the highly sordid but highly technical details!2 END_OF_DOCUMENT_TOKEN_TO_BE_REPLACED