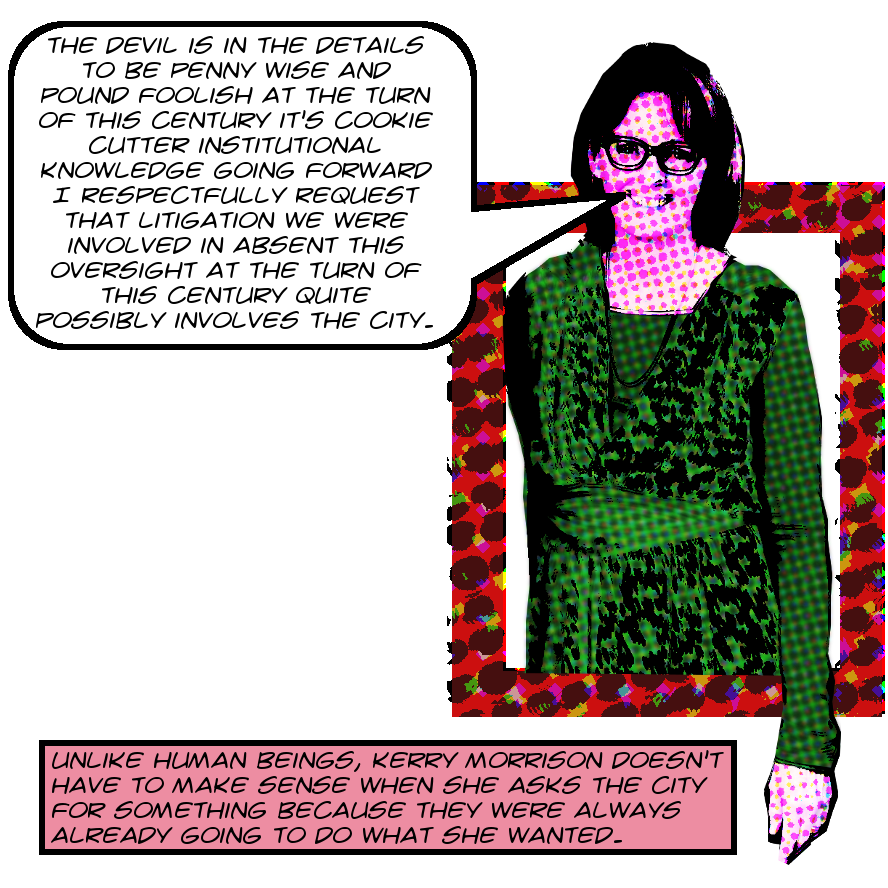 It seems that in 2013 the City was considering transferring BID management functions away from the City Clerk to some to-be-created Office of Imaginary Money-Shuffling Practices or suchlike nonsense. Obviously it didn’t happen, but nevertheless we’re still as lucky as can be to have recently discovered a copy of a letter written by Ms. Kerry Morrison, chock-full of her characteristically narcissistic stylings, in support of keeping BIDditude with the Clerk.

Her unwritten point is that the Clerk’s BID unit is already firmly under the thumb of the BIDs,1 and any change would be detrimental to the BIDs, therefore no change should be made, whatever the needs of the City, and these she really does not deign to consider, might be. Her written points are more prosaic, and except for one of these the interest mainly lies in counting her weirdly nonconscious invocation of cliches.2

Her sole interesting point, and it’s interesting mostly for the way it highlights her absolute indifference towards the truth, has to do with one of our favorite topics on this blog, which is the intersection of BIDdology with the Brown Act and the Public Records Act:

Because of litigation that our BID was involved in at the turn of the century, the boards that manage BIDs are now subject to the Public Records Act and the Brown Act. The City Clerk’s staff helps to ensure compliance. Absent this oversight, it is very possible that one of the BID boards would be sued, which would also involve the city of LA.

Unfortunately I don’t have the time to dissect the unselfconsciously sprinkled self-satisfied hermeneutics of this lil cupcake of a prose poem, However, let’s move past the break and consider some of the inaccuracies and omissions. And, of course, there’s also a transcription of the whole damn letter.
END_OF_DOCUMENT_TOKEN_TO_BE_REPLACED

According to scientists the top 20% of U.S. drinkers drink an average of 6.3 drinks per day.1 At 0.6 ounces of pure alcohol per drink2 that works out to 3.78 ounces all together. At 30 ml per ounce that comes to 113.4 ml of pure alcohol. Steve Seyler’s bête noire is something called Taaka vodka which is, we assume, 80 proof, or 40% alcohol. Thus 113.4 ml is equivalent to

The small bottles that everyone in the BID is so het up about are 200 ml, so we’re talking about

=1.42 bottles of Taaka. What’s the chance that someone on the Board of directors drinks at this rate and still has the temerity to vote in favor of policies that target homeless people for arrest for doing the same thing that they do every freaking day? It’s pretty high, friends. Details below the fold.
END_OF_DOCUMENT_TOKEN_TO_BE_REPLACED