The City of Los Angeles famously and frequently violates the California Public Records Act. One of the most difficult-to-counter ways in which they do this is to deny that they have responsive records at all. It’s pernicious because the only recourse for violations is to file a petition in Los Angeles County Superior Court but the statute only authorizes petitions when:

it is made to appear by verified petition … that certain public records are being improperly withheld from a member of the public.1

That is, if the City says there are no records and there’s no evidence to the contrary it’s likely a judge will believe the City’s claim and deny the petition.2 Which means it’s often useful to have evidence that responsive records exist even before requesting them. It’s also really important to duplicate requests to as many City departments as may have copies, since they all have different search methods.3

Fairly regularly one City department will say that there are no responsive records while another one will produce proof that the first was lying. For a recent and spectacular example of this phenomenon take a look at this stunningly good Twitter thread from @LANCWatch.

Sometimes even the same department will produce proof that they themselves are lying, an example of which is the subject of today’s post! On June 19, 2021 I asked LA Sanitation for some information about ride-alongs on their CARE/CARE+ homeless encampment sweeps:
END_OF_DOCUMENT_TOKEN_TO_BE_REPLACED 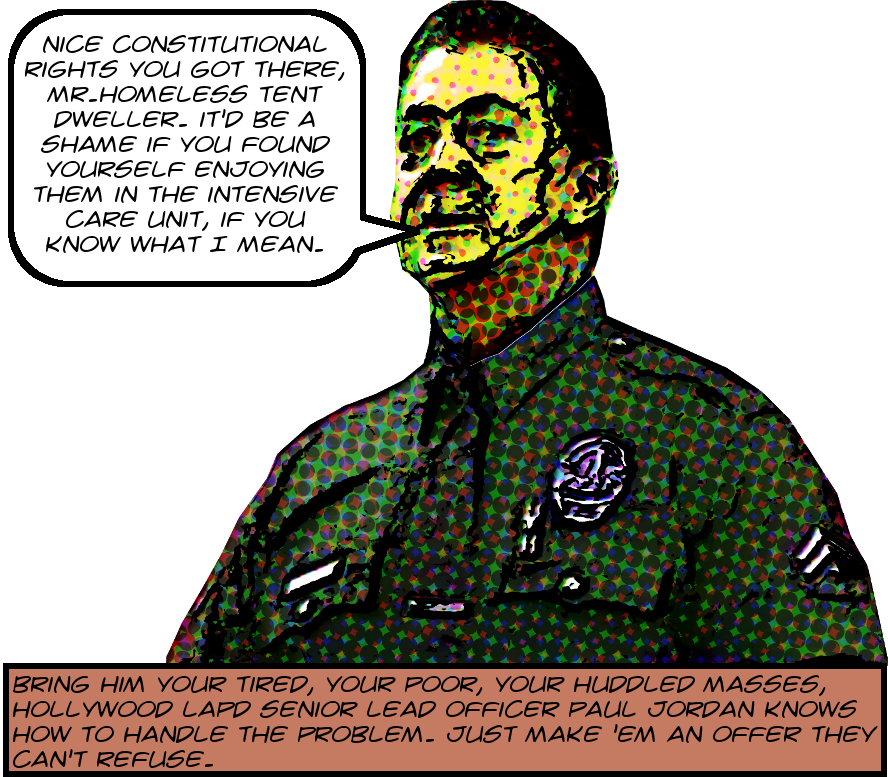 I just received a reasonably large set of emails from the LAPD involving Hollywood zillionaire, racist police-caller, and Hollywood Media District BIDdie Ferris Wehbe1 and LAPD Hollywood Division Senior Lead Officer Paul Jordan. I was looking for material involving the Hollywood Forever Cemetery fiasco but ended up with a bunch more evidence about what the LAPD motto means with respect to our homeless brothers and sisters when the cops think no one is watching but the hateful homedwellers to the whims of whom they’re paid to pander.

You’ll find a lot of interesting stuff in there, but the text for today’s sermon is this conversation from February and March 2018. The participants are the usual rageball gang of housedwellers, possessed with the usual heaping dose of what passes for righteous wrath among the propertied classes, Hollywood cop Jordan, and various City staffers, including Mitch O’Farrell flunky Dan Halden, a couple of jokers from CD4, deputy city attorney and, at that time, Hollywood neighborhood prosecutor Steve Houchin, and Hollywood Division Commander Cory Palka.

There’s really nothing atypical about the story. It begins, as so many of these episodes do, with an imaginary claim that things are getting worse, that the median melanin level in a previously placid caucasian paradise is rising, crime is exploding, turpitude is raining down like the mighty waters, and so on. The florid semiliteracy of this initial cri de coeur, though, is kind of unique and so is presented here with the weirdo capitalization, made-up words, and idiosyncratic spelling all intact, is not standard:

Seems Like there’s this sergeancy of Brazen Homeless youth and some older that are wondering around the De Longpre Park neighborhood looking for Crimes of Opportunity!

The fear and anger and hate escalate through familiar delusional stages albeit with uniquely weird particular details. Homeless people are shitting in the bushes! They’re naked in the driveway and showering with the hose! They’re having sex on the lawn! At eleven in the morning! The church attracts them by handing out free food! The 7-11 attracts them by selling hot food!

They’re drinking beer! They’re making people nervous! They’re setting up tents in permit parking neighborhoods, which everyone knows is not allowed!2 They don’t pay property taxes! And bills! Like normal people! We need to form armed vigilante gangs! Like we had in the good old days! Let’s have a neighborhood meeting!3

And eventually they focus their rage on one particular tent, although it’s certainly not clear that the person living there has had anything to do with the enumerated atrocities.4 And in one of the most explicitly articulate statements of official City policy towards the homeless we’re likely to see, Hollywood Division Senior Lead Officer Paul Jordan explains what happened next:

I had a nice conversation with the young man inside the tent today. Needless to say, his tent is gone and he will not be returning to that location. I also went to the LGBT Center and spoke with Andrew, who is now aware of this individual, and will be spoken to by the LGBT staff. Please keep me posted if he decides to return.

And then? Well, Officer Jordan gets the immediate gush of goopy approval that such thuggie boys live for5 and the very next day David Ryu flunky Catherine Landers is back to discussing the terms of the upcoming neighborhood meeting. There’s no outrage from these City staffers, no note to Paul Jordan telling him that it’s against the law for police to go around threatening homeless people to get them to move, no nothing.

And no surprise from me, either, because I’ve just read too many emails exactly like these ones to be surprised anymore. But I’m still mad that this is the level our City government is at, that not only do they break the law and oppress the poor to placate the rich but they don’t even try to hide it. Turn the page for a transcription of the conversation.
END_OF_DOCUMENT_TOKEN_TO_BE_REPLACED

This morning, CD13 Councilmember Mitch O’Farrell introduced a resolution seeking to impose restrictions on parking oversized vehicles in a semi-industrialized sliver of the Hollywood Media District BID located roughly between Cole Avenue and Vine Street west to east and Santa Monica Boulevard and Melrose Avenue north to south. There is a never-ending flow of these seemingly innocuous items in the agendas of our esteemed Council, but I just happen to know an awful lot about the backstory to this one, which is anything but innocuous, actually, and is the subject of today’s post.

The Media District BID is particularly attractive to people living in RVs because it’s industrialized, so no night-time neighbors to annoy, and it’s close to the center of Hollywood. Especially on Lillian Way and its cross streets, Romaine, Willoughby, and Waring, there has been a thriving but quiet community of RV-dwellers for years on end. But the Media District BID hates it. They just can’t deal with it. For instance, see this email chain from March 2015 where Hollywood cop Julie Nony discusses how to get rid of them with erstwhile Media District BID director Steven Whiddon and a bunch of overprivileged proprietors who don’t understand the concept of public space. But, probably not surprisingly, Steven Whiddon was unable to orchestrate any lasting action.


So enter Lisa Schechter, employed by erstwhile CD4 rep Tom LaBonge until June 30, 2015. Sometime between then and October 2015 she was hired by the Media District to replace the departed but unlamented Whiddon. Very soon after that, in fact on November 5, 2015, Schechter and current Media District Board President Laurie Goldman met with O’Farrell’s Hollywood Field Deputy, Daniel Halden. Dan was kind enough to supply me with a copy of his notes from that meeting, wherein (on the second page) one can read the portentous words: “Oversized vehicles Resolution — MAP.” There’s no question that this meeting between Halden, Goldman, and Schechter, is the genesis of the resolution introduced this morning by Mitch O’Farrell.
END_OF_DOCUMENT_TOKEN_TO_BE_REPLACED