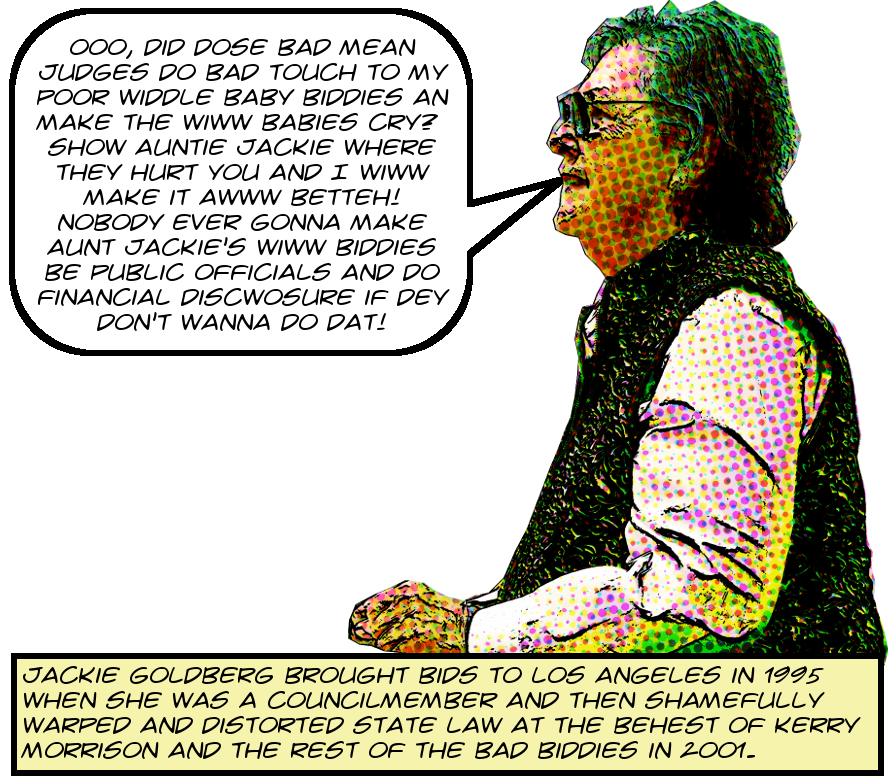 The only reason that this blog even exists is that business improvement districts in California are subject to the California Public Records Act. And the first part of the story of how this came to be is fairly well known. In 1998 Hollywood property owner Aaron Epstein wanted to attend meetings of the Hollywood Property Owners’ Alliance1 and Kerry Morrison, who then as now would willingly brook no interference in her proprietary demesne, told him to go pound sand.

Instead of slapping the silica, though, Epstein filed suit against the BID, and the process culminated in the lovely holding, in Epstein v. Hollywood Entertainment District BID, that BIDs2 were subject to the Brown Act and the CPRA. This ushered anti-BID activists into a paradise from which we are unlikely to be expelled. Kerry Morrison didn’t take this outcome with any grace whatsoever and has been pissing and moaning about it from the outset all the way to the present day.

But that opinion isn’t the only authority that subjects BIDs to transparency laws. There is also the famous §36612 of the PBID Law of 1994, which states in no uncertain terms that BIDs are subject to both the Brown Act and the CPRA.3 It also states explicitly (and ominously) that BID board members and staff are not public officials. Obviously this section was added by the legislature after the Epstein ruling, but I never took the time to investigate the history.

Until now, that is. And what an obvious-after-the-fact surprise it was to find that the bill that added that section was written by none other than Jackie Goldberg, who as CD13 Councilmember during the formation of the Hollywood Entertainment District BID was known to have a great deal of blood on her hands already.4 But by March 2001, when Epstein was finally decided, Goldberg was in the Assembly, so naturally it was to her that the BIDdies, emotionally traumatized by the court’s decision,5 went running for comfort.

And in response to their pleas Goldberg introduced AB 1021 (2001) to coat the bitter pill of Epstein with some soothing syrup and to codify these changes in §36612 of the PBID law even while acknowledging that the legislature wasn’t going to be able to change the court’s holding 6 And I recently obtained a copy of the bill analysis prepared at the time for the Assembly’s Committee on Local Government to help them understand what they were voting for.7 Therein are laid out not only the provisions of the new law, but the complaints of the BIDdies, so the connection is perfectly clear.

The main concessions to the BIDdie agenda found in the code section are the explicit statement that BIDs are private corporations and that neither BID boards nor staff can be considered public officials for any reason. This last bit is tied in to the BIDs’ fear that board members might be subject to California’s political reform act and to Government Code §1090 and therefore to various ethics restrictions and financial disclosure requirements, although it’s not really clear to me that the language has that effect. I’m no kind of expert, though.

Another sop to the BIDdies provided here by Goldberg was the authorization of 10 year renewals. Previously BIDs could only renew for up to five years. In any case, turn the page for more detail, more non-expert discussion and, as always, a transcription of the document.
END_OF_DOCUMENT_TOKEN_TO_BE_REPLACED 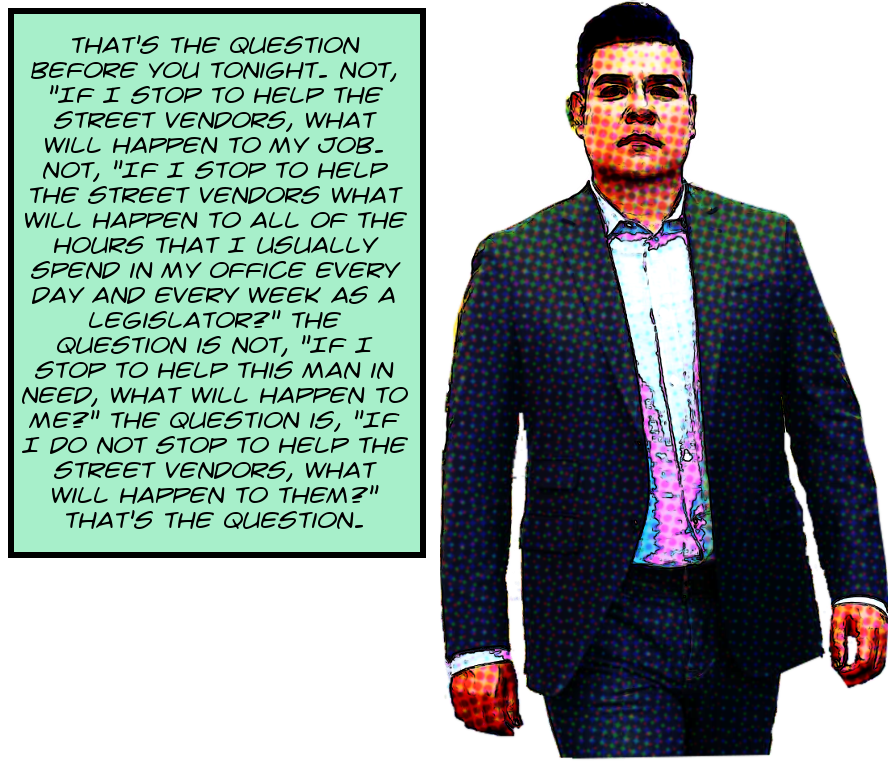 The last we heard about Ricardo Lara’s monumental street vending regulation bill, SB-946, it had been sent up to the full assembly from the Committee on Local Government with a “do pass” recommendation. This was in June, just before the legislature adjourned for the entire month of July. Things have been pretty quiet with respect to this bill lately, and I admit that I was getting a little worried that really destructive amendments were in the works.1

But it turns out, or at least it appears, that all is well. Yesterday the bill was amended, but the changes were fairly unsubstantial. There were a number of stylistic adjustments and a separate fine schedule was added for people who vend without a permit in cities which do have a permitting process in place. Given the fact that Los Angeles has been arguing about permitting vendors for decades without being able to arrive at an actual process, none of this is likely to apply here.

The bill was then ordered to the Assembly floor for a third and final reading before a vote. I don’t know enough about the legislature to figure out when that might happen, but my feeling is that it’s likely to pass as currently written, since they ought to have worked out all the kinks by now, eh? Then it’s up to the governor, and I have no idea what he’ll do with it. Maybe organized opposition by zillionaires and their sleazy advocates has more weight with him than it’s had with the legislature so far?

I don’t know, but turn the page for a transcription of the section on fines with the newly added material in blue.
END_OF_DOCUMENT_TOKEN_TO_BE_REPLACED 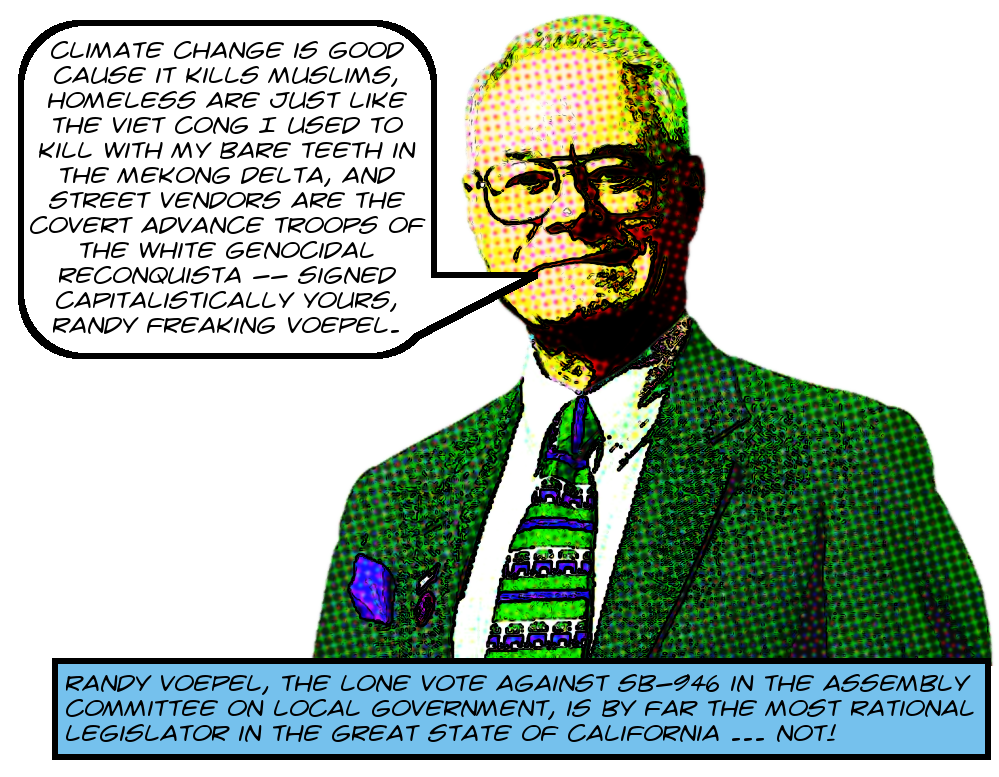 On Wednesday Ricardo Lara’s brilliant street vending regulation bill, SB 946, was approved by the Assembly Committee on Local Government with a 6 to 1 vote after only a very few gentle amendments. It’s now heading for the full Assembly, where it certainly looks like it’ll pass easily.

For obvious reasons, most of my coverage of the opposition to this bill has focused on our local Los Angeles BIDdies, so for a change this morning, I thought I’d introduce you to Randy Voepel, the dimwit 71st district repster and lone vote against SB 946. Hailing from the the methamphetamine capital of the world, this joker believes more batshit crazy nutcasery before breakfast than sane people can scoff at in an entire lifetime. Turn the page for more details than you actually want to read!
END_OF_DOCUMENT_TOKEN_TO_BE_REPLACED 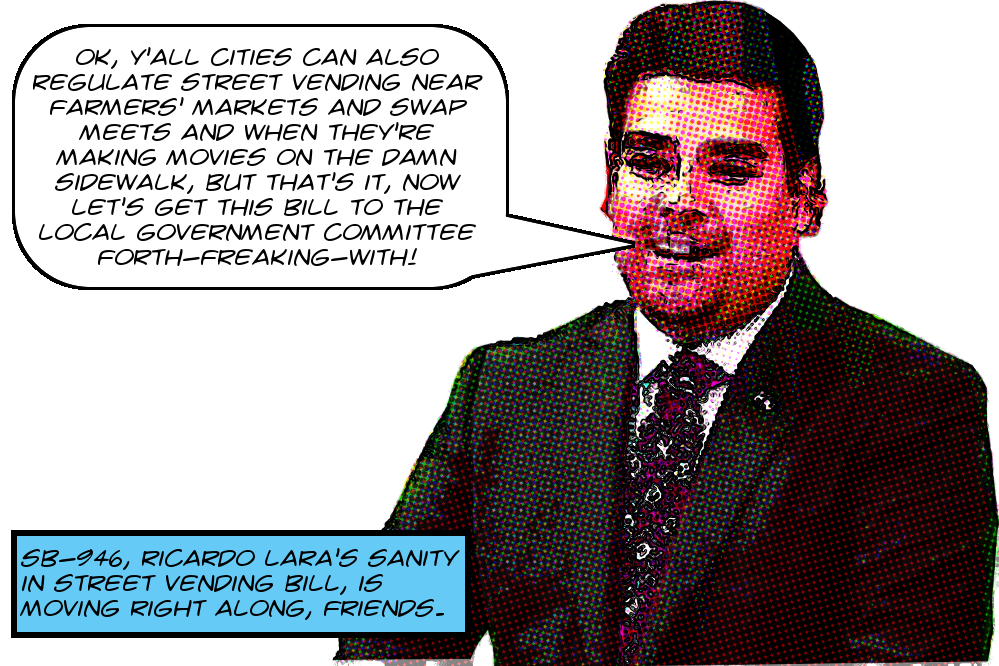 For reasons known only to themselves and their 90210-based therapists, these powerful political players hate sidewalk vendors to the point where it seems acceptable to arrest them, chain them, confiscate and waste their wares and equipment, and so on. They compare them to drug dealers and prostitutes and are seemingly unable to comprehend the economic value brought to our City by these entrepreneurs, let alone the social value.

And it’s often the case that what makes the zillionaires unhappy makes the state legislature unhappy. These people have essentially endless political juice. We saw a heartbreaking example of this last year with the saintly Rob Bonta‘s AB-1479. This bill proposed much-needed improvements to the California Public Records Act and was curbstomped and gutted by our local zillionaires and their satanic minions with the assistance of slimy little BIDdie-boy Miguel Santiago, who will be running for Jose Huizar’s seat in 2020 and thus has every incentive to please the Downtown power elite at the expense of the human population of California.

So watching Lara’s essential bill make its way through the legislature since it was introduced at the end of January has been an anxiety-inducing process. It passed the Senate intact in early May and made its way to the Assembly. It’s been hovering around the edges of the Local Government Committee without any action until yesterday, when it was amended by Lara and put on the committee’s schedule for Wednesday, June 20.

And thankfully the amendments were exceedingly minimal. You can compare the new language here, and there’s a transcription after the break. All that happened, though, is that the current version will allow cities to prohibit vending near certified farmers’ markets, near permitted swap meets, in parks for a few new reasons, and on sidewalks with a valid temporary use permit. The most important facets of the bill are still blessedly intact, including the amnesty provisions. Fingers crossed for the 20th, friends! You can find your reps here and write to them about it.
END_OF_DOCUMENT_TOKEN_TO_BE_REPLACED