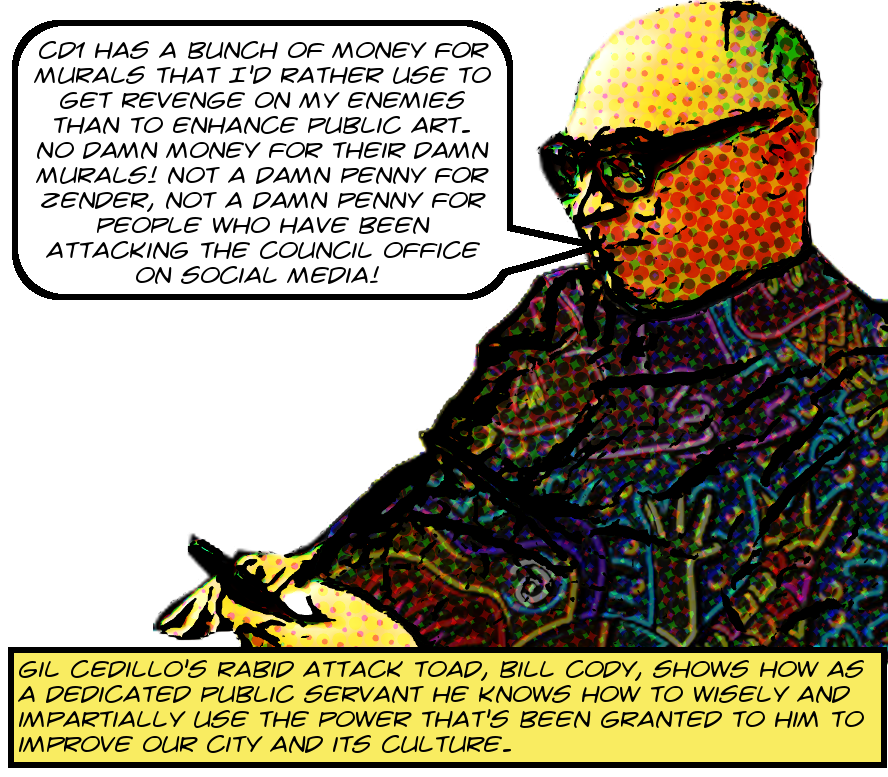 This Highland Park mural story gets more convoluted and appalling by the day. You’ll recall that in concert with the Highland Park Business Improvement District Cedillo staffer Bill Cody worked with the Department of Cultural Affairs to allow the BID to destroy two well-loved murals in Highland Park. One of these was by renowned HLP muralist John Zender.

This episode led to community protests, organized by among others HLP heroes and heroines Brenda Perez, Yaya Castillo, and Mando Medina, who ended up being surveilled and stalked by Cody, as well as the establishment of radical pro-mural/anti-gentrification group Restorative Justice for the Arts by Perez. Oh, and did I mention this petition calling Bill Cody out for his serially harassing ways?

Cody also has a long-stewing grievance against Perez, Castillo, and Medina, based on something to do with Chicken Boy, Amy Inouye, and Stuart Rapeport, that I do not understand and it really seems like he made it all up, which is not uncharacteristic of the fellow. So there’s a lot of tension swirling around HLP these days with respect to murals and the people involved with them.

And then there’s Kathy Gallegos, executive director of HLP art scene fixture Avenue 50 Studio. The studio accepts funding from the Department of Cultural Affairs, and apparently one thing that Gallegos does with the money is arrange for murals to be painted around HLP. And it seems that in June 2018 Gallegos had a contract with DCA to organize a mural by Anthony Ortega and some of the funds were provided by CD1, with Bill Cody staffing the matter.1 The story is told in this email conversation of which, as always, there is a transcription after the break.

But then Cody discovered that Gallegos had subcontracted with Zender, along with a number of other respected HLP artists. And Cody flipped out and sent an at-the-mouth-frothing email to Yami Duarte and Felicia Filer of DCA interrogating them on this development, demanding that Zender be removed from the project and threatening to withdraw CD1’s funding. Why? Because Zender was known to be friendly with Castillo and Perez and, according to Cody:

The grant was approved by myself and I never would have involved the parties that have been attacking the local constituents. I am told Brenda Perez and Yaya Castillo have been involved and at this point I would like the contract redone with John’s name removed for many, many reasons.

And Cody made it very clear that he views CD1’s cultural funding as a way to reward his friends and punish his enemies:

We’re not really big on giving grants to folks who are involved with people who have been attacking the Council Office on Social Media. We’ll definitely want to make sure that does not happen in the future.

And the trouble with this? There are so many troubles. [A]ttacking the Council Office on Social Media is what we do in America. It’s none of Cody’s damn business who’s attacking the Council Office. And if CD1 is going to be giving out grants, they’re certainly not allowed to choose the recipients based on their political opinions. That’s just a straight-up violation of the First Amendment.

And it’s a betrayal of the public trust. CD1 doesn’t have all that money so their staffers can play favorites and hand it out to their smoochy-face friendsy-wendsies. They have it so that they can keep things running and make the City better. If that means following the rules and paying people who attack the Council Office on social media, well, that’s the kind of thing that grownups have to do sometimes.

And not only is this illegal, not only is it a betrayal, not only is it immature, but like everything about Bill Cody, it’s also stupid in the kind of floridly bizarre way that’s essentially the guy’s signature at this point. For reasons only he understands Cedillo hasn’t fired the guy for being a serial harasser, but maybe he’ll fire him for making him look like such a chump. In any case, turn the page for transcriptions of the emails.
END_OF_DOCUMENT_TOKEN_TO_BE_REPLACED