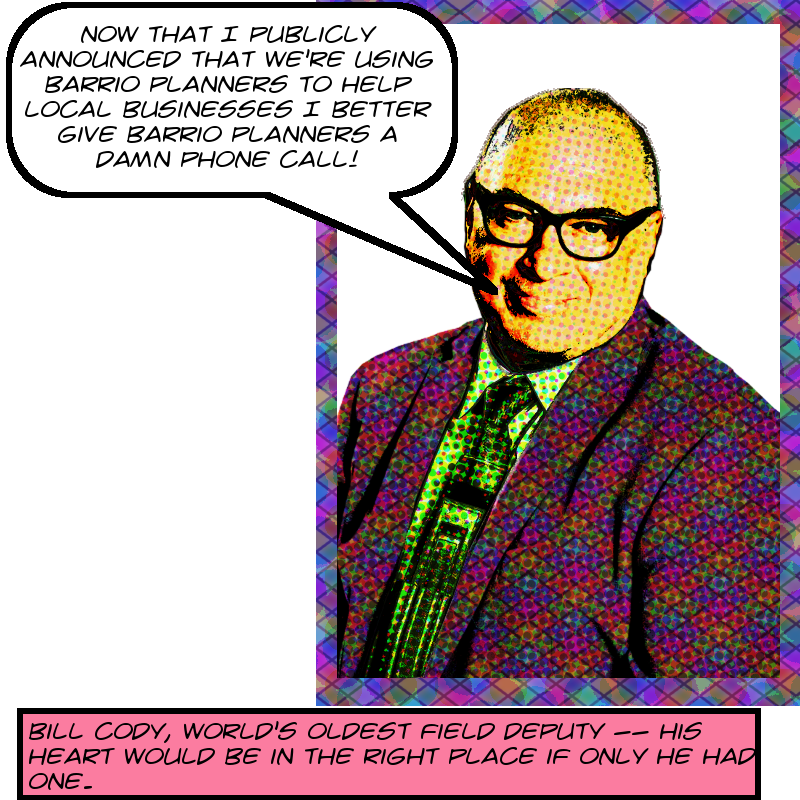 Anyone who’s paying attention to Los Angeles politics recently knows about the hipster apocalypse presently unfolding in Highland Park. I had occasion yesterday morning to walk south on Figueroa Street this morning from Avenue 61 to Avenue 501 and it’s basically like hipster Jim Crow, with businesses duplicated on every block and divided starkly along racial lines. A hipster tonsorial salon2 next to a Latino barber, hipster clothing next to work shoes or ropas segundas, hipster cold-press juice bars next to stands selling jugos naturales, and so on.

Weirdest of all is the situation with coffee places. Over and over and over again one sees a hipster coffee place full of tattooed young white people right next to a panaderia full of brown people. Both places serve coffee and baked goods and yet somehow there’s evidently no way that one place can satisfy both crowds. It makes absolutely no sense to me, probably not to any sane people.3 These coffee places, three or four to the block, are a stark and clear symbol of the holocaust that so-called legacy businesses along Figueroa Street are undergoing and which those along York Boulevard have already undergone baby gone.

And because hipster-serving establishments charge prices that are many times the prices the older businesses can sustain, they can afford rents high enough to drive the older places out of business. And the landlords are thrilled by this, of course, because they pocket the extra money with extra outlay of neither capital nor labor on their part. It’s a zillionaire’s wet dream.4 And it’s also not a mystery. It’s well-covered in the press. Rents go up and very soon after the vultures start feathering their nests.

And because it’s not a mystery, and because it’s a subject of deep import to many constituents in CD1, it’s entirely fitting and proper that residents would share their concern with their Council staffers and entirely fitting and proper that said Council staffers would respond. And we have already seen that something like this happened with the world’s oldest field deputy, Bill Cody, the crankiest and most bellicose flunky ever to rep Gil Cedillo or, for that matter, any other Councilmember in the entire damn history of Los Angeles.

At the May 15 meeting of the North Figueroa Association, which is the property owners’ association for the infamous Highland Park BID, he was questioned pretty intensely by Jesse Rosas about this very issue and responded in a rather mealy-mouthed fashion by claiming that his boss, Gil Cedillo, was taking care of it by hiring some kind of a firm, known as Barrio Planners, that presumably knows how to take care of such things:

And I’m always worried about that. Oh, one more thing. We have Barrio Planners, who’s been helping a lot of the local businesses to try to find placement for some of the ones who, um, … a couple of properties have changed situations and … I have been working with all those businesses, I [unintelligible] them together with Barrio Planners, they’ll work on that issue, we pay them to do that. So, we’re very, very concerned about that and we’ve been working tirelessly on that issue.

And since that day, more than five months ago at this point, my compatriots and I have been trying to figure out exactly what the heck Bill Freaking Cody was talking about. And because the CPRA mill grinds slowly we didn’t get much action for quite a while, but because the CPRA mill does grind, CD1 finally handed over some emails. You can read all of them here on Archive.Org, and turn the page for selections that reveal that despite the good game talked by Bill Cody, the Council District’s intervention via Barrio Planners on behalf of these threatened businesses seems to have been quite minimal and therefore the subject of wild overhyping by Bill Cody when e.g. he claims that they have “been working tirelessly on that issue.”

The first hint in the record of a connection between Barrio Planners and Bill Cody is this September 2017 email from Gerald Gubatan, who is Gil Cedillo’s senior planning deputy, introducing the two parties:

I’d like to introduce you to Bill Cody, who is our CD-I Field Deputy representing various neighborhoods in NELA, including HLP. He has been approached by the HLP BID which has raised concerns about “legacy” businesses in HLP who now may be struggling to sustain business in a gentrifying commercial district.

I wanted to connect Barrio Planners with Bill so perhaps you can pick-up this conversation.
…
Bill: Meet Ralph Carmona and Ruben Sanchez with Barrio Planners, Inc., the City’s contractor for its Business Source Center.

There are a few interesting things about this introduction, not the least of which is the claim by Bill Cody, evidently passed on to Gerald Gubatan, that the Highland Park BID is the source of the concern about the so-called legacy businesses threatened by gentrification. As you know, in April 2018 I was lucky enough to obtain thousands of emails from the Highland Park BID, available on Archive.Org here and also here, and nowhere in there do I find this putative concern for legacy businesses expressed. On the other hand, you know what they say about absence of evidence.

It’s also interesting that Gil Cedillo’s senior planning deputy so blithely uses the G-word when discussing these matters. In my, and I admit it is limited, experience, City officials, especially those of the planning variety, are not so comfy with using this word.5 But whatever that September 2017 email might mean, it’s clear that the matter was not on Bill Cody’s super-duper high priority to-do list, because the next time Barrio Planners come up in the record isn’t until this March 2, 2018 email conversation between Bill Cody and Barrio Planner staffer Ruben Sanchez:

I want to reiterate how refreshing it was to talk with you about the needs of small businesses. I would like to propose a date of May 12th for having a small business forum here in Highland Park. That should give pleanty [sic] of time to prepare and get the word out.

And again, on March 9,2018 Bill Cody emailed Ruben Sanchez to talk about the same issue. But again, nothing conclusive happened:

I have some local legacy businesses that are losing their space. I would like to help them stay in the neighborhood or close by if possible. I was told you might be able to help.

Let me know what can be done. I of them is Juan Lopez who owns Elmer’s Jewelry who has been there 33 years (I presume he bought the place from Elmer) at 323-258-5298. He fixes watches at a good price and has numerous local regulars.

Let me know if there is anything we can do to help.

I would like to ask you for something very important. Larry has been working with me on the Figueroa Corridor to try and help the Legacy Businesses that are under pressure right now.

There are two buildings in question. One that houses Sunbeam Vintage at 106 S Ave 58, Los Angeles, CA 90042, along with the Typewriter Store, Hair Zone and Nature’s Perfections. They are waiting for Leases from the owner as they have been negotiating improvements and rents. The owner is a legacy owner but he could be repped by someone else at this point. Those addresses are 5720 and 5720-1/2 Figueroa St. 90042.

The second building is the one that houses a Hair Salon and Elmer’s Jewelry. They are at 5910 and 5912 Figueroa St. There are other businesses in the back as well.

That building is owned by a family that has been in the neighborhood for many years but is now being repped by a Property Management firm. Juan at Elmer’s thinks he will be able to stay but I have been told by the property manager that that isn’t true. She has told myself and many others on the black [sic] that they are all being evicted and the building will be rehabbed.

We really need someone from Barrio Planners to go out and help these businesses. I know Larry has been out a few times but it would be good if someone who speaks fluent Spanish could go with Larry and talk to the owner of Nature’s Perfections and Juan at Elmer’s.

These folks need help but it is limited what I can do for them at this point. And their leases are all ending in June from what I understand. Feel free to call me on my cell at 213-312-7165.

And now at last we see what a priority it is for Bill Cody to help these businesses which are struggling because of the economic scheming and maneuvering of his masters. He emailed Barrio Planners a few times over an eight month period and then, after getting pretty harshly called out by Jesse Rosas on May 15, 2018 at a BID meeting which, don’t forget, I was actually filming, he brought up Barrio Planners in his defense, in defense of the Councilmember he serves.

And then, five days after the meeting where he publicly announced most vehemently and with as sincere a manner as he’s capable of that Gil Cedillo and he, Bill Cody, were paying Barrio Planners to fix the whole problem, he figured that hey, maybe he better get back in touch with Barrio Planners and try to get the whole thing moving again. And that’s what he did. Which kind of casts some doubt on his on-camera claim to be “working tirelessly” on it. But it’s not news that Bill Cody’s a liar and a fabulist. And that’s the whole story. And no one’s paying me to draw conclusions, so I’m not.