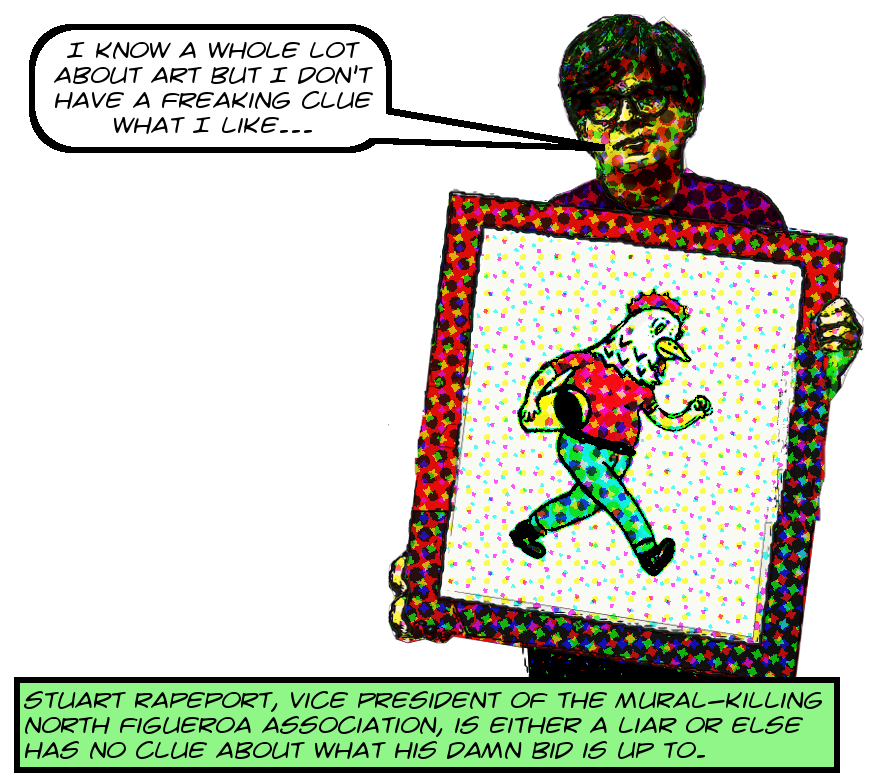 So remember how some murals got painted over in Highland Park in 2017 and a lot of people were pretty sure that the Highland Park BID was responsible for their destruction but there wasn’t really any proof and then in June 2018 LA Magazine wrote a story about it and, inspired by that, I was able to get some emails from the Department of Cultural Affairs that demonstrated conclusively that the BID did in fact paint over the murals?

Well, a couple of recently obtained emails between Wendy Newell of the Boulevard Sentinel and some staffies at CD1 show that she was also looking into this matter as early as April 2018, ultimately leading to this April 29, 2018 story. As part of her investigation Newell contacted Stuart Rapeport, vice president of the North Figueroa Association, which is the owners’ association for the Highland Park BID, and he told her that the murals had been painted over by the City of Los Angeles rather than his BID buddies. Of course, we now know that this is not true.

The murals were in fact painted over by the Highland Park BID with the City’s explicit permission. So what’s the explanation for Stuart Rapeport’s denial, then? I can only think of two plausible stories. Maybe he’s a liar. This wouldn’t surprise any Los Angeles BIDologists. These BIDdies all lie. Or maybe even though he’s the vice president he nevertheless doesn’t have the first clue what his BID is doing with the money he and his fellow Board members have been entrusted with. Also this wouldn’t surprise. Boards of directors are meant to oversee the expenditure of the compulsory assessments, but often they don’t oversee anything, give their staff complete license to do whatever, and mostly just show up to Board meetings for the free coffee.

We’re probably never going to know which scenario explains Stuart Rapeport’s false statements to Wendy Newell, but neither looks good for him. Also not a surprise. Very little of what BIDdies do looks good for them when the public is looking. Turn the page for a transcription of the two emails.

First, Wendy Newell wrote to some unnamed CD1 staffers, almost certainly including Conrado Terrazas and Fredy Ceja, to ask for information and to complain that Bill Cody wouldn’t answer her. This last bit is also not a surprise:

I’m a freelance writer reaching out to you on behalf of the Boulevard Sentinel. In researching a story we’ve learned that 3 murals or drive-thru galleries, in public parking lots near the Ebell Club and The Greyhound in Highland Park have been painted over.

I need to know who made the decision to paint over the murals, when and on what grounds.

I’ve been able to discuss this issue with members of the community and their understanding of what happened. For a complete story I require these details from the city.

I have also made an attempt to reach out to Bill Cody via Linkedln with no response. Cody’s email address is not listed on Cedillo’s website.

To meet the deadline I need your feedback by end of day today, Monday April 16th.

I had the opportunity to speak with Stuart Rapeport, Vice President of the North Fig Association in Highland Park this morning. His assumption is that the murals in question would have had to have been painted over by the city as his association has not received any complaints about graffiti on those walls.

This makes response from the city all the more important.

Again, I need to know who made the decision to paint over the murals in question, when and on what grounds.

And to finish the story, the brave citizen of Los Angeles who obtained this email from CD1 via the California Public Records act told me that Mel Ilomin, who is Gil Cedillo’s policy deputy, stated that Fredy Ceja responded by phone to Wendy Newell, which is why this is the only record available. And that’s the end of that sordid little puzzle piece, friends!

Image of Stuart Rapeport holding a piece of hipster pornography is ©2018 MichaelKohlhaas.Org and is you know somehow something something this Rapeport right here.