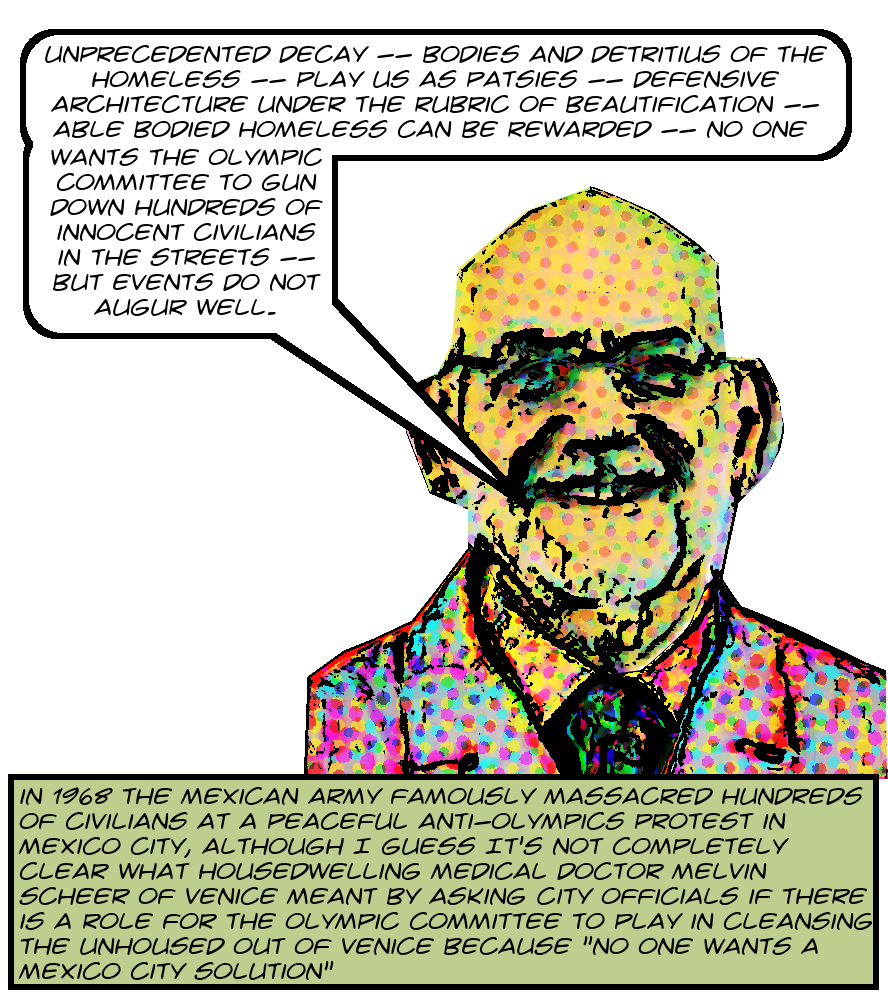 In June of this year I was forced to file yet another lawsuit against the City of Los Angeles to enforce my rights under the California Public Records Act in the face of their habitual reflexive intransigence, this time against CD11 over emails having to do with those goddamned planters. Well, as I have already reported, the City caved immediately and began handing over records.

And just recently I got another set of goodies from them with a little bit of interesting stuff in it, so I thought it was time to catch you all up on the story, provide links to the goodies, and mock and shame yet another unhinged homeless-hating housedweller, this one seemingly promoting Mexico City style mass killings by the Olympics Committee.1

Let’s start with the links. These are all the emails at issue in this suit that I’ve received so far. They’re not in any kind of order, and, as usual, the City has engaged in its usual passive aggressive scrambling, crooked scanning, chronological disordering, and so on, so, by design, they’re pretty much impossible to sort through and understand globally. But they’re still worth reading, of course! There’s a lot of material here, downloadable via bittorrent if that’s the way your pleasure tends, or by straight links:

And among all this chaff there are a number of really interesting items. Not least of these is this November 8, 2018 email from housedwelling Venice physician Mel Scheer to Eric Garcetti, Mike Bonin, and Michel Moore, complaining that even though he supports Bonin’s plan for the MTA lot and he loves the ACLU and stuff, there is still a damn encampment near his house.

There’s a transcription of this nonsense below, which includes many familiar housedweller obsessions, though stated with a remarkable lack of ambiguity. For instance, asking about planters, Scheer doesn’t fool around with euphemistic nonsense about food production and stuff, not at all. He straight up asks the City to lie about beautification and also tell how much of the law planter placers can violate without consequences:

Is there a role for defensive architecture such as city maintained rock gardens or planters on streets and right-of-ways? The City can do this under the rubric of street beautification. Venice Boulevard has fine examples near the DWP facility east of Fairfax. Define publicly the limits of what private citizens can do without being cited for code violations or civil action.

And then things get really weird really fast. You and I, dear reader, of course are completely up on the fact that one of the main reasons our local zillionaires are so hyped about bringing the Olympics to Los Angeles is their cruel efficacy as a tool of mass displacement. Our friends at Nolympics LA have taught us that. Surely the zillionaire backers of the games understand this function, or at least, as with so many even slightly complex matters, they have paid minions who understand it on their behalf.

But, and maybe I’m guilty of underestimating the awareness of the average rank and file homeless-hating housedweller,2 I guess I don’t really expect these folks to accurately understand the Olympics as a weaponized Nuremberg-Rallyesque tool of class war. But it really seems that Scheer does understand it this way, at least that’s what his plaintive cri-de-coeur to his leaders would suggest:

Is there a role [in removing the homeless] for the Olympic Committee? Surely no one wants a “Mexico City Solution.” Time is racing, and current events do not augur well for a strong finish.

And maybe I’m missing something about this “Mexico City Solution” he’s on about. When I contemplate Mexico City and the Olympics in the context of social conflict, what mostly comes to mind is that time the Mexican army massacred hundreds of college kids in a public square for having the temerity to oppose the 1968 Olympic Games. But as well and as thoroughly as these fauxhemian housedwelling fascists might slither around in their writhing blood lust, it’s still probably pretty unlikely that we’re going to have an all-at-once mass killing by agents of state violence.

Nowadays, around here, the people with the power to kill the homeless prefer slaughter by economic parameters rather than bullets, spread out over time and space, detectable as mass killing only statistically, more deniable, less potential for going viral, but an ongoing massacre nevertheless.3 I don’t get the sense that Scheer is thinking of this ongoing Olympics-facilitated genocide. As I said, it looks to me like he’s thinking of actual guns and soldiers. Read the whole thing below for context and interpret it for yourself. And that, friends, is all I have to say about this particular chapter in the story.

Previously I have spoken up for your Bridge Housing plan, as have many of my neighbors on Park Avenue in Venice. I have done so privately and publicly. I took the mic voicing my support at the Venice Town Hall Meeting, and have written compliments to you afterwards. I received an update on the slow process of removing the barricade. Two days ago I returned from a trip to see an unprecedented decay in the situation at the west end of the block. It has all the hallmarks of a permanent encampment.

(A note of sarcasm: in a Swiftian sense, there is now no need to move the barrier wall — the bodies and detritus of the campers are sufficient to block the vehicle of any maniac intent on mayhem. Just joking, tear down the wall.)

You are making it virtually impossible to have us, the governed, believe that you are competent to deliver the services you have proposed for the MTA site. It is with great reluctance that I write this. Perhaps there is truth in the adage that ‘the worst kind of conservative is a liberal that has been mugged.’ It is beginning to feel like you are the muggers.

1. Explain why Brooks, a thoroughfare, one block south, has no campers. What is being done right on that street?

2. Selective street cleaning three or four times a week at least on a trial basis. You have expressed concern about the site as a thoroughfare, post signs, use hose and brush trucks as you would for street cleaning.

4. Do not play us as patsies. Have something successful to demonstrate your competence, and do it soon. A long term plan is admirable, but the City government needs our support now, do not lose any more of it.

5. Is there a role for defensive architecture such as city maintained rock gardens or planters on streets and right-of-ways? The City can do this under the rubric of street beautification. Venice Boulevard has fine examples near the DWP facility east of Fairfax. Define publicly the limits of what private citizens can do without being cited for code violations or civil action.

6.1s there a role for the Olympic Committee? Surely no one wants a “Mexico City Solution.” Time is racing, and current events do not augur well for a strong finish.

7. Can able bodied homeless be rewarded for engaging in a street sweeping program? The use of a shower and laundry facility at the lifeguard center after working is a thought.

8. Talk to us about how to best civilly engage the ACLU and other advocacy groups. Personally I have a been contributor for years. What can you advise.

Meanwhile, I will continue to with the work of the VNC and Community Housing. I know that your task is hard, but locally it has failed.

Sent from my iPad