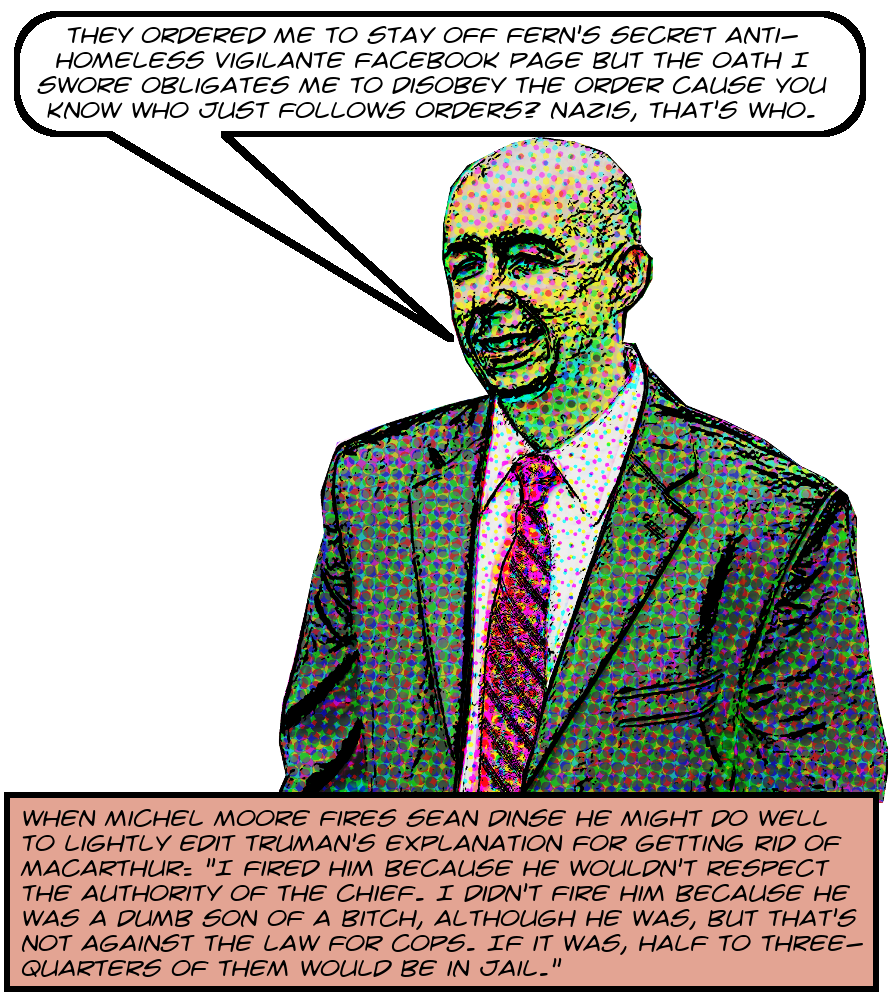 No doubt you recall the whole to-do out in the far west Valley having to do with former LAPD volunteer Fern Peskin-White and her various secret anti-homeless vigilante Facebook groups, highly problematic for having LAPD officers as members even as other members were cracking jokes about burning out the zombies and any number of other horrific forms of terrorism.

So Valley Chief Jorge Rodriguez convened a public meeting a few weeks ago and he and Chief Michel Moore announced that LAPD officers would no longer participate in these vigilante groups. But then, apparently in violation of a direct order from his superior officer, Sean Dinse rejoined the group on Friday, September 27, 2019.

I have heard some speculation about the relevance of the fact that Dinse rejoined using his personal Facebook account rather than an official LAPD account, and I thought that it might be a good time to review a 2018 notice by Chief Michel Moore on LAPD use of social media which covers precisely this issue.

Note that I wrote about this item a few months ago in relation to a larger release of records having to do with LAPD and social media. The current episode with Dinse and the vigilante anti-homeless Facebook groups gives it a currency and a context that it did not have at that time, so I think it’s worth bringing up again. The key bit here is that, according to Moore,

Personnel, however, are cautioned that identifying oneself as a Department employee … may: (1) suggest that the views expressed on the platform are positions endorsed by the Department; and/or, (2) create the appearance that the account holder is acting in an official capacity.

Accordingly, Department personnel should be mindful that a personal social media account that contains LAPD-related graphics, photographs, or identifying information may create a nexus to the Department and subject the employee to the policies and restrictions applicable to on-duty contact and conducting official Department business.

It’s not exactly clear to me which policies Moore is referring to here, but certainly among them they include the Employee Conduct section of the LAPD Manual, which includes the following paragraph, which seems pretty relevant to me, although I am obviously an amateur and don’t really know:1
210.35 CONDUCT UNBECOMING AN OFFICER. A police officer is the most conspicuous representative of government, and to the majority of the people, the officer is a symbol of stability and authority upon whom they can rely. An officer’s conduct is closely scrutinized, and when the officer’s actions are found to be excessive, unwarranted, or unjustified, they are criticized far more severely than comparable conduct of persons in other walks of life. Since the conduct of officers, on- or off-duty, may reflect directly upon the Department, officers must at all times conduct themselves in a manner which does not bring discredit to themselves, the Department, or the City.

Surely being a member of a Facebook group where one’s presence is valued precisely because one is a police officer, where one is known to be a police officer by all involved, where police matters are reported and police opinions solicited, surely all that is enough to create the nexus to the department about which Moore is concerned. And surely the kind of terrorism discussed and chuckled over on the Facebook group is enough to “bring discredit to” everyone concerned.2

I’ve also heard some speculation about Dinse’s First Amendment rights protecting his participation in this group, by the way, and we could do far worse than to close with a famous statement by the famous Justice Oliver Wendell Holmes, ruling on a related issue more than a hundred years ago in McAuliffe v. Mayor of New Bedford: “The petitioner may have a constitutional right to talk politics, but he has no constitutional right to be a policeman.”

Image of rogue cop Charles “Sean” Dinse is ©2019 MichaelKohlhaas.Org and you can kind of, well, you know, like that.