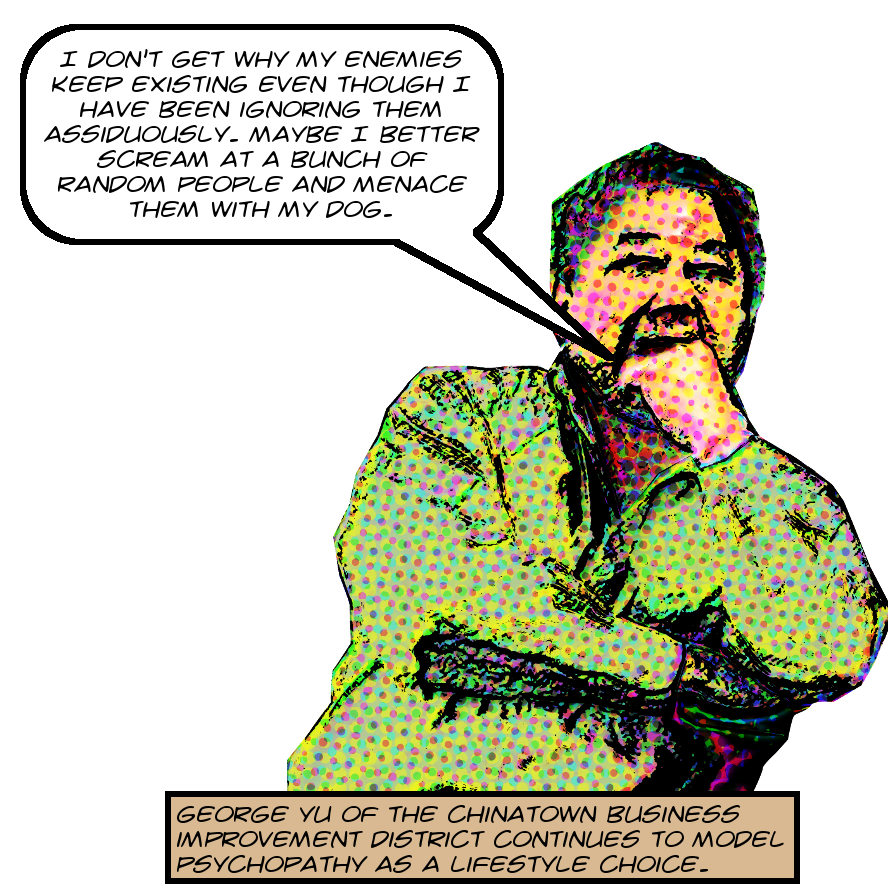 As you probably know, last year Katherine McNenny and I were forced by the unhinged intransigent refusal of psychopathic rageball George Yu to comply with the California Public Records Act to file a lawsuit against his Chinatown Business Improvement District. For reasons known only to himself, George Yu not only refused to comply with the statute, he refused to participate in the lawsuit at all.

We were seeking a writ of mandate from the judge ordering Yu to hand over the documents. It turns out that, in California at least, courts are not allowed to issue such orders merely because the respondents don’t show up.1 It’s still required that the petitioners prove their case. Which, of course, we were able to do, because it was righteous. So last Wednesday, July 24, 2019, the trial was held, before which the judge issued a tentative ruling granting us our every wish.

The whole trial lasted about 30 seconds and consisted of the judge asking our lawyer if he wished to be heard on the tentative. He said that he did not. The judge adopted the tentative as final and told the lawyer we could have our notebook back. You can get a copy of the tentative ruling here and a copy of the minute order showing that it was adopted as final here.

There are a bunch more steps before everything’s done. We have to serve the final ruling on the BID, the judge has to sign the order, we have to file a motion to get paid, probably will have to file more stuff to enforce all that stuff. These wheels have been turning very slowly since August 2018 when we filed, and they continue to turn slowly, but they’re crushing everything in their path as they turn.

And it’s possible, at least from my wishfully-thinking-but-obviously-not-a-lawyer point of view, that one of the crushables in their path is the very existence of the Chinatown BID. Never forget, first of all, that business improvement districts, despite all the rhetoric about public private partnerships and suchlike nonsense, are fundamentally public entities.2

For the most part disestablishing a BID is done at the Council’s discretion, but there are a number of circumstances under which the Council is required to hold a hearing on the question of whether a BID should be disestablished. That is, they don’t have to get rid of the BID, but they do have to take public comment on whether the BID should be gotten rid of. One of these circumstances, about which I wrote in 2016 as a potential way to destroy a BID, occurs when a BID violates a law in connection with its operation.4 This is found in the Property and Business Improvement District Law at §36670(a)(1), which states in pertinent part:

36670.(a) Any district established or extended pursuant to the provisions of this part … may be disestablished by resolution by the city council in either of the following circumstances:

(1) If the city council finds there has been misappropriation of funds, malfeasance, or a violation of law in connection with the management of the district, it shall notice a hearing on disestablishment.

See how the disestablishment is discretionary; the BID may be disestablished, but the hearing is mandatory; the City Council shall notice a hearing on disestablishment. Well, it’s mandatory-ish, because there’s still a loophole. In order for this clause to come into play it’s necessary that the city council finds there has been misappropriation of funds, malfeasance, or a violation of law in connection with the management of the district. Pretty clearly the City Council is not required to make specific findings. They’re elected to make findings on their own, not to have them mandated by the legislature.

So potentially, even if it’s obvious to everyone that a BID is violating the law, the City Council might ignore all the evidence and never make a finding that would then require a disestablishment hearing. But on the other hand the legislature doesn’t write laws that don’t have an effect.5 If it were entirely up to the unchecked discretion of City Councils they might never ever find that a BID had violated a law, even if e.g. the BID killed someone at the corner of Wilshire and Vermont at 5 p.m. on a Friday and was later convicted of murder.

This makes no sense. It can’t be within the meaning of the law.6 So if, e.g., we had some independent reliable evidence that the BID had violated a law in connection with its management duties, we might be able to convince the City Council to find that there had been a violation, and then they would have to notice a hearing. If they refuse to so find, again, with independent reliable evidence, we might be able to convince a court to order the Council to so find.7 And then they would be required to notice a disestablishment hearing.

This all sounds quite good, and it certainly passed the MK.Org test of legal sufficiency, which is that I told it to more than zero lawyers and fewer than all of them laughed. And like I said I’ve been kicking this idea around since 2016. What has been lacking, though, is the independent reliable evidence of a violation. Lacking, that is, until George Yu decided to ignore the legal proceedings discussed here.

You may recall that in January 2019, as part of the case, we hit the Chinatown BID with a bunch of discovery materials. And among all this good stuff was a set of requests for admissions. And among these requests for admissions were six questions, numbers 4 through 9, which asked the BID to admit that they had violated various sections of the CPRA. They’re all pretty similar, and here is number 6 as an example:

RFA #6. — Admit that YOU violated California Government Code § 6253(b) by failing to provide Petitioners with the non-exempt RECORDS they requested.

And, true to form, George Yu ignored the discovery materials. To the point where we had to ask the judge to order the BID to respond. And the judge did order them to. And they still didn’t. And the remedy for this is, among other things, to deem that all the requests for admission were admitted to by the BID. And on July 3, 2019 the judge did exactly that. So by a ruling of the court the BID admitted to six violations of the Public Records Act.8

And that, friends, is reliable independent evidence that the Chinatown BID violated a law in connection with its management. And that, friends, is how I am going to find out whether we can use §36670 to force the City Council to hold a meeting on disestablishing a BID. We have to get done with this CPRA case before I want to get going on that project, and who knows how long that’s going to take, but eventually we will get done with it. And then, well, then, let’s just see if we can’t destroy this damn Chinatown BID.9

Image of George Yu eating his own fist and wondering when it all started to go wrong is ©2019 MichaelKohlhaas.Org.