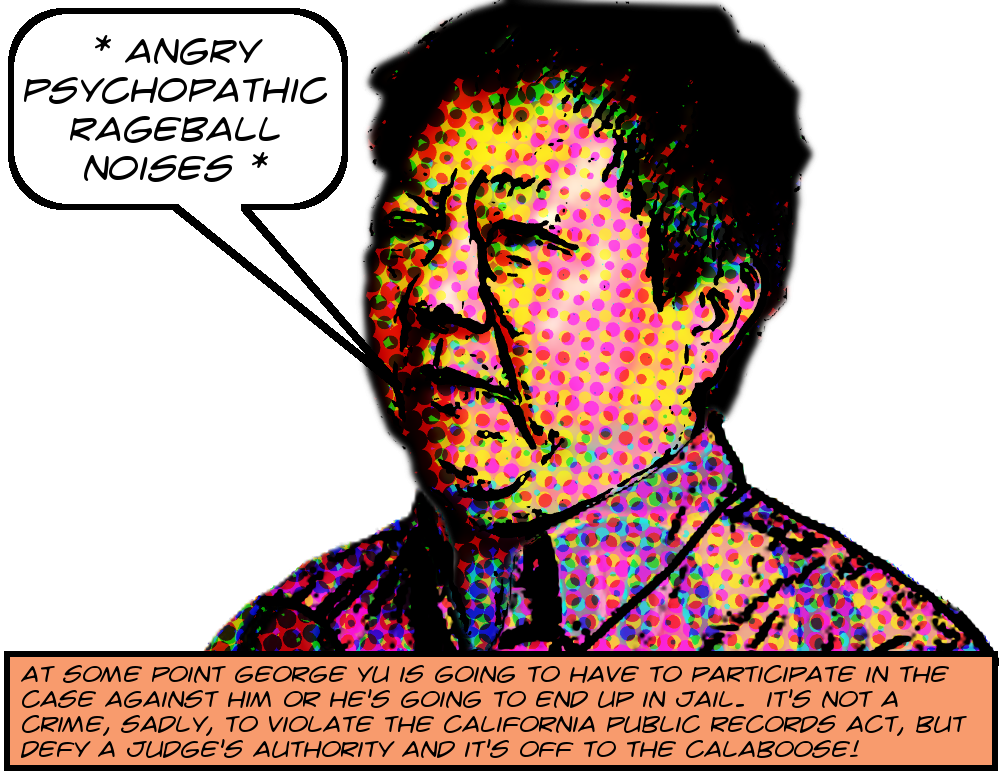 Let’s have a recap! In August of 2018 Katherine McNenny and I filed a petition against psychopathic rageball George Yu, the supreme leader of the Chinatown BID, for his failure to respond at all to a whole series of requests for records under the California Public Records Act. Then in September the BID failed to file a response to the petition before the deadline and in November no one from the BID showed up at the trial setting conference.

And to this very day George Yu has done nothing at all to even acknowledge that there’s this case pending against his damn BID. Of course a legal system isn’t a viable proposition if people can just ignore it. Obviously at some point they can be made to participate. And according to the lawyers,1 step one towards this end is to serve a bunch of discovery on them! And that is just what they did this very day! Today’s kind of discovery comes in three flavors, and here they are:

Anyway, one hopes that this will get things moving over at the BID. George Yu can’t go on ignoring the situation forever, and there’s no such thing as a psychopathic rageball defense, at least not in a civil matter. The next step is a motion to compel, and after that, who freaking knows?! What we really want here is the records and to establish a viable workflow for future requests. If there’s a grownup in the room over in Chinatown, now would be the time to put them in charge. Turn the page for a transcription of (most of) the requests for admission.

RFA #1
Admit that YOU did not produce ANY RECORDS in response to ANY of Petitioners’ requests.

RFA #2
Admit that YOU failed to conduct a reasonable search for the RECORDS that Petitioners requested.

RFA #3
Admit that YOU failed to review the RECORDS that Petitioners requested to determine whether they were properly disclosable under the California Public Records Act (“CPRA”).

RFA #5
Admit that YOU violated California Government Code § 6253(c) by failing to notify Petitioners, within 10 days of receiving each of Petitioners’ requests, of the estimated date AND time when ANY RECORDS YOU determined to be disclosable would be made available.

RFA #6
Admit that YOU violated California Government Code § 6253(b) by failing to provide Petitioners with the non-exempt RECORDS they requested.

RFA #7
Admit that YOU violated California Government Code § 6253(b) by failing to make the non-exempt RECORDS that Petitioners requested promptly available.

RFA #8
Admit that YOU violated California Government Code § 6253(d) by failing to notify Petitioners of the names AND titles OR positions of each individual responsible for YOUR denial of their request for RECORDS.

RFA #10
Admit that info@chinatownla.com is YOUR email address.

RFA #13
Admit that YOU have a pattern and practice of failing to lawfully respond to California Public Records Act requests as required under California Government Code § 6250 et seq.

RFA #14
Admit that ALL of the RECORDS that Petitioners requested are not properly subject to ANY of the exemptions under California Government Code § 6254.

Image of George Yu is ©2019 MichaelKohlhaas.Org and you might wanna take a lil look at this TV show here.