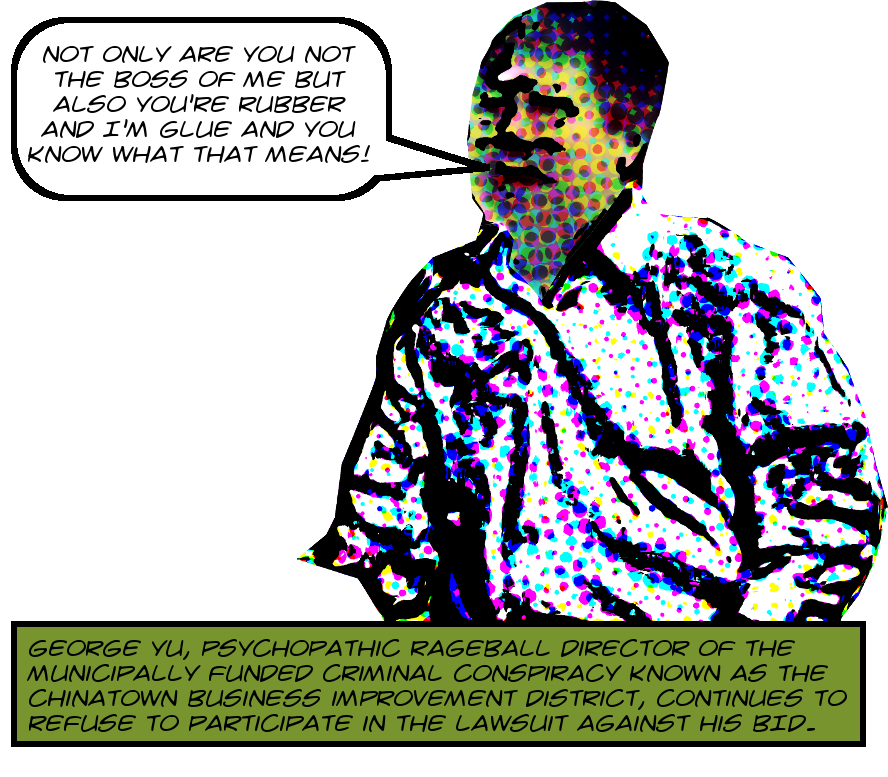 I mean, at this point all these posts about our1 lawsuit against the Chinatown Business Improvement District are turning out about the same. We do something and he ignores it and doesn’t show up for court or file papers or do whatever he was supposed to do. And the last such item was the discovery we served on the BID in January. And he just wouldn’t answer!

Well, the trial is coming up on July 24 and our lawyers have to have the opening brief in on May 24. So yesterday we filed a motion to compel the BID to answer the discovery and also to pay $3,160 in costs incurred because of Yu’s intransigence. But there’s an extra problem, which is that there’s no room on the court’s calendar for hearing the motion until July.

This would leave no time to incorporate the discovery information into the opening brief, so we’re doing an ex parte application to hold the hearing on the motion to compel sooner.2 It’ll be heard this Thursday, May 2, at 8:30 am in Department 86 of the Mosk Courthouse. Turn the page for some excerpts from the lawyer’s declaration explaining what a bad, bad boy George Yu has been.

1. I am an attorney licensed to practice before all the courts of the State of California. I am a solo practitioner and the sole attorney of the Law Office of Anna von Hernnann. Along with Abenicio Cisneros, a solo practitioner with the Law Offices of Abenicio Cisneros, I am the attorney of record for Petitioners and Plaintiffs … (“Petitioners”) in this matter. If called as a witness, I would and could competently testify as follows:

3. On February 20, 2019, having received no response from Respondent to any of the discovery, I mailed a meet and confer letter to Respondent on behalf of Petitioners. In the letter, I reminded Respondent of the February 22, 2019, deadline to respond to the propounded discovery. I expressed my hope that Respondent would properly respond to the propounded discovery so that the issue could be resolved informally without the use of judicial resources. However, I also made clear that Petitioners intended to file a Motion to Compel if Respondent failed to provide responses to the discovery as required by law.

5. When I attempted to reserve a date on which to have this motion heard, I was informed that the earliest date available was in July of 2019. The Hearing on Petition for Writ of Mandate in this matter, which is essentially a trial date, is currently scheduled for July 24, 2019. Petitioners’ opening brief on the Petition for Writ of Mandate is due 60 days prior to the hearing. As such, it was necessary for me to apply ex parte to have the time within which to have a hearing on the instant motion to compel shortened.

6. Attorney’s fees have been incurred in connection with this Motion in the amount of $3,160.00. I bill $345 per hour for my time, pursuant to the Laffey Matrix, which has been applied to determine “reasonable market rates” in California courts in cases such as Syers Properties III, Inc. v. Rankin (2014) 226 Cal. App. 4th 691, 701. I personally spent 4.25 hours preparing this motion.

I declare the foregoing is true and correct under the penalty of perjury of the laws of California.

Image of the psychopathic rageball known in the vulgate as George Yu is (a) ©2019 MichaelKohlhaas.Org and (b) somewhat based on this walking talking rageball here on YouTube.