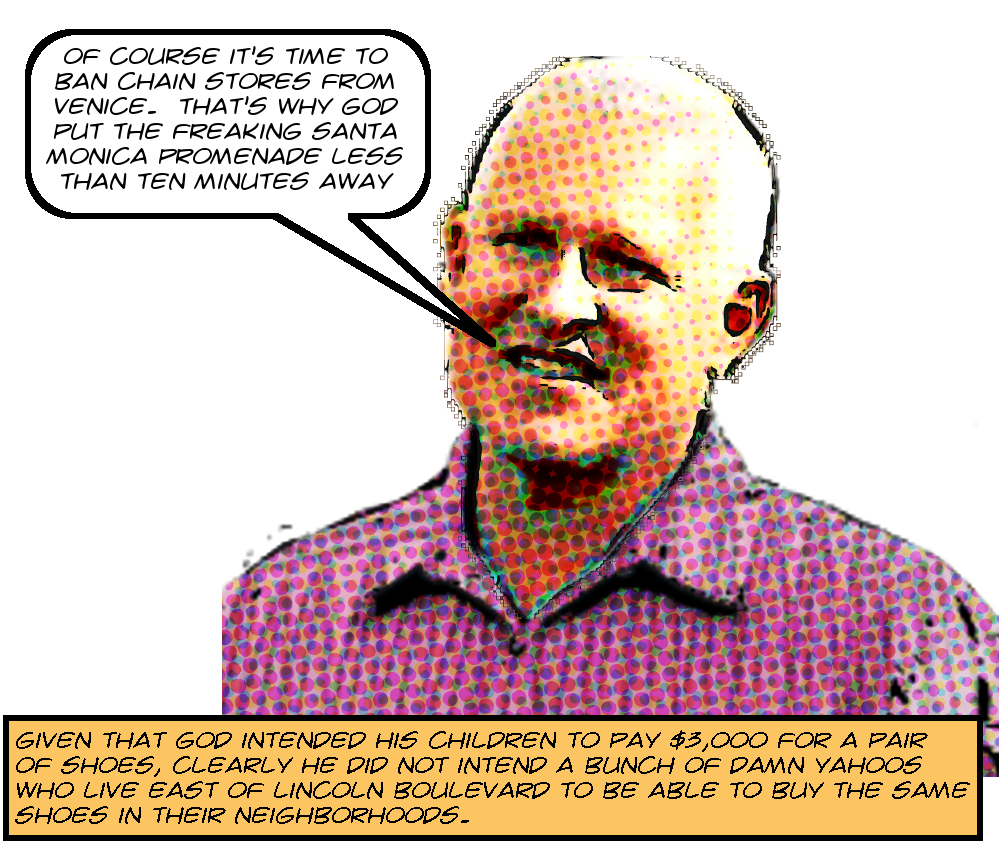 UPDATE: This motion now has a council file number, which is CF 07-0629-S1. Note that this is a supplemental file and the original motion was by Bill Rosendahl (!) in 2007 to accomplish the same thing, but it died on the vine. The original file was CF 07-0629 and Rosendahl’s original motion is here.

Well, for God’s sake. Mike Bonin, councilcrumpet in charge of that formerly holiest of holy neighborhoods, the late lamented Venice, seems to have just noticed that independent businesses as opposed to chain stores can contribute a great deal to the character of the community. With that in mind he introduced this motion in Council this morning instructing the City Planning Department and the City Attorney to study the possibility of preventing chain stores from ruining everything even more than it’s already ruined by copying San Francisco’s anti-chain-store zoning laws.

And as much as I hate Mike Bonin, and as much as I don’t go to Venice any more because I’m not a freaking necrophiliac, I think these kind of laws are a good thing. The City of Los Angeles gives so much power to zillionaires and their BIDological sock puppets to shape the character of the neighborhoods they’ve colonized and almost no power at all to the residents. Super-restrictive zoning laws like the ones proposed here can take some of that power away from the property owners and shift it over to individual non-zillionaire residents who, after all, are the ones that made their neighborhoods desirable and so whose opinions really ought to be heeded.

So even though I’m sure that Mike Bonin’s motives are despicable, and even though I’m sure all his reasons are wrong, toxic, and repellent, nevertheless, even as a hundred monkeys with typewriters sometimes produce a coherent blog post,1 so it seems does Mike Bonin occasionally propose an at least superficially laudable motion. The big question though that this raises is where is Gil Cedillo? Where is José Huizar?2

Highland Park, mostly in CD1, and Boyle Heights in CD14, also two of the holiest holy neighborhoods of this grand and holy City, are being raped, killed, and eaten just as Venice was raped, killed, and eaten starting some thirty years ago. But it’s not too late to stop the damage there before it’s irreversible. Cedillo and Huizar have the opportunity to do what e.g. Ruth Galanter, on whose watch Venice started circling the drain down which it’s long since disappeared, was unwilling to do to save these irreplaceable neighborhoods with whose care they’ve been entrusted.

Why aren’t they right up there with Mike Bonin asking staff to study how to save Highland Park, how to save Boyle Heights? Why aren’t they seconding Bonin’s motion instead of Paul Freaking Krekorian? Rhetorical questions, of course. They’re not saving Highland Park or Boyle Heights because it’s worth too much money to destroy them. Because Bonin’s zillionaire Venice constituents will get what they want but the poor, the working class, residents of Highland Park and Boyle Heights have no money and therefore no leverage at all with their Councilmembers. In thirty years, no doubt, their successors will be proposing exactly this same kind of motion, too late to raise the reeking corpses. As usual there’s a transcription of the motion after the break.

The Venice community in the City of Los Angeles is experiencing a significant amount of investment and redevelopment due to a strong local economy and robust housing market. This has resulted in economic pressure on commercial properties such as rising rents and the displacement of locally-owned independent retail businesses. Ocean Front Walk, in particular, is experiencing these impacts.

Locally-owned independent businesses are a hallmark of a healthy community and help to safeguard the public welfare. Neighborhood-based businesses are important contributors to the identity of Venice and help to sustain the social fabric of the community by providing local services to residents in a walkable environment.

Other cities such as San Francisco, CA and Jersey City, NJ have enacted land use planning and zoning rules to preserve the “sense of place” and unique neighborhood character in their communities by supporting small businesses and independent retail uses. These so-called “formula retail ordinances” allow a local government to shape the mix of businesses in their city. Some ban all chain stores from certain neighborhoods; some cap the number of retail chain stores allowed within a neighborhood; and others require a case-by-case approval of proposed retail use projects.

I THEREFORE MOVE that the Department of City Planning study the impacts of independent retail uses on the social fabric of a community and to report back on the levels of economic, social, and cultural activity such uses support, including the number of jobs per square foot and the diversity of residents.

I FURTHER MOVE that the Department of City Planning, in consultation with the City Attorney, report of the feasibility of using zoning and other land use planning tools to encourage the siting of independent retail uses on Ocean Front Walk in the Venice community.

Image of Mike Bonin is ©2018 MichaelKohlhaas.Org.

2 thoughts on “Mike Bonin Instructs City Planning And City Attorney To Study Possibility Of Using Zoning To Protect Local Independent Businesses In Venice With Goal Of Preserving Unique Neighborhood Character — Where Are Gil Cedillo With Highland Park And José Huizar With Boyle Heights In This Conversation? — There’s An Ungodly Amount Of Money At Stake In All Three Neighborhoods But Only In Venice Are Zillionaires Losing Their Community Character”