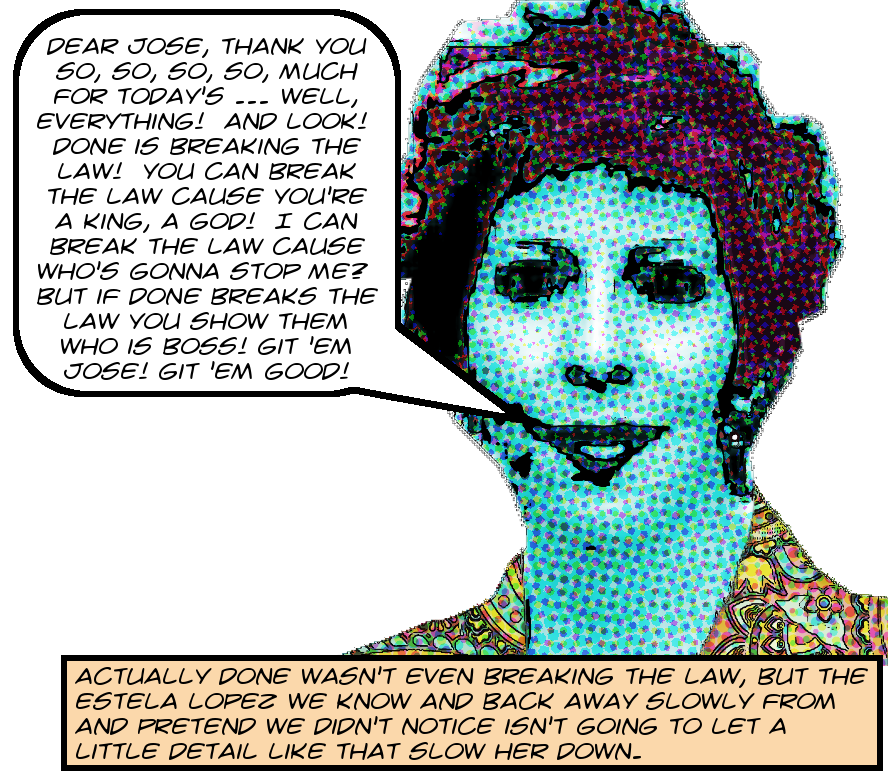 This is a new piece of an old story. You may recall that in January 2017, right after the Skid Row Neighborhood Council subdivision effort was certified by the Department of Neighborhood Empowerment, Skid Row’s own high priestess of Satan and associated evil deities, that is to say Estela Lopez, made a request under the public records act seeking various bits of information to toss into the wicked potion then, unbeknownst to the side of the angels, bubbling away in her reeking cauldron and with which she and her killer klown krew of slithy minions and halfwit henchies would later put the SRNC into a coma just like Snow Freaking White.1

That’s old news, of course,2 but still interesting. You can read Estela Lopez’s request right here and there’s a transcription of that PDF somewhere down the page in this old post. But what’s new this morning is this just-obtained email from Estela Lopez to CD14 repster José Huizar,3 in which, after a little obligatory sycophancy, she complains to José Huizar that DONE didn’t answer her request on time:

Dear Jose, thanks so much for today’s meeting. Below is the request I submitted to DONE on January 17. I have not received a reply. Today represents the 10-day deadline for at least an initial response to a CPRA request.

Have a good weekend. See you on Broadway!

I mean, really. The sheer platonically ideal chutzpah of this woman just boggles.4 She’s complaining to José Huizar that DONE didn’t answer her request within the legal deadline when (a) she herself is one of the City’s worst violaters of the CPRA,5 (b) José Huizar is also essentially incapable of complying with the CPRA,6 (c) most of us don’t have access to our councilmembers to encourage City departments to comply with the CPRA,7 and, worst of all, (d) DONE wasn’t actually in violation of the law at that point, so she really had nothing to complain about.

Not that this kind of clueless exploitation of privilege is anything surprising at this point, but it is what we write about here. Turn the page for a discussion of the technical aspects of the CPRA relating to Estela Lopez’s complaint!

The key section of the law here is §6253(c), which states rather confusingly8 that:

You can see here where Estela Lopez picked up that figure of 10 days, but things are complicated, as they often are when it comes to the law. The key complication here is that the 10 days starts “from receipt of the request.” And there is no reliable way to tell when an email is received.9 The California Code of Civil Procedure at §1013 does specify presumptions of receipt, but it doesn’t cover email. The closest thing is fax, in subsection (e), and even then a transmission is not presumed to have been received for two days after it was sent.

Not only that, but Estela Lopez’s initial request was sent at 5:07 p.m., which is after normal office hours. All DONE has to do is to argue that they didn’t see the email till the next day and Estela Lopez has no case. Or they could argue by analogy that emails are like faxes and that they therefore can’t have been presumed to have received it until January 19, 2017.

It’s worth noting, though, that she is counting correctly, even if from the wrong starting day. The California Code of Civil Procedure at §12 states:

The time in which any act provided by law is to be done is computed by excluding the first day, and including the last, unless the last day is a holiday, and then it is also excluded.

However, that bit about holidays doesn’t include weekends, it seems, at least according to the First Amendment Coalition. So counting according to the law from January 18, 2017 we arrive at a due date of January 28, 2017. That was a Saturday. Despite what the law seems to say, it’s a matter of pragmatic fact that no judge will sanction a public agency for failing to respond on a Saturday. And the law is not what the law says in America, but rather what a court will say it is.

And in closing, I guess I can afford to mention that Estela Lopez did avoid the most popular misreading of §6253(c). She’s aware that it only requires an agency to respond within 10 days and absolutely not to provide records within 10 days. It does require the agency to estimate when the records will be ready, but it provides no remedy if they ignore their estimates, even repeatedly, which is a major, major flaw in the law.

I can’t tell you how often a BID or a City agency has written back to me within the deadline informing me that they’ll have the records ready in six months, only to extend that estimate repeatedly. Shameful but irremediable, it seems. So that’s this morning’s CPRA lesson, friends! Obviously you found it worthwhile, or why would you be reading the last sentence?10

Image of Estela Lopez is ©2018 MichaelKohlhaas.Org and take a look over here if you want to contemplate its genesis.