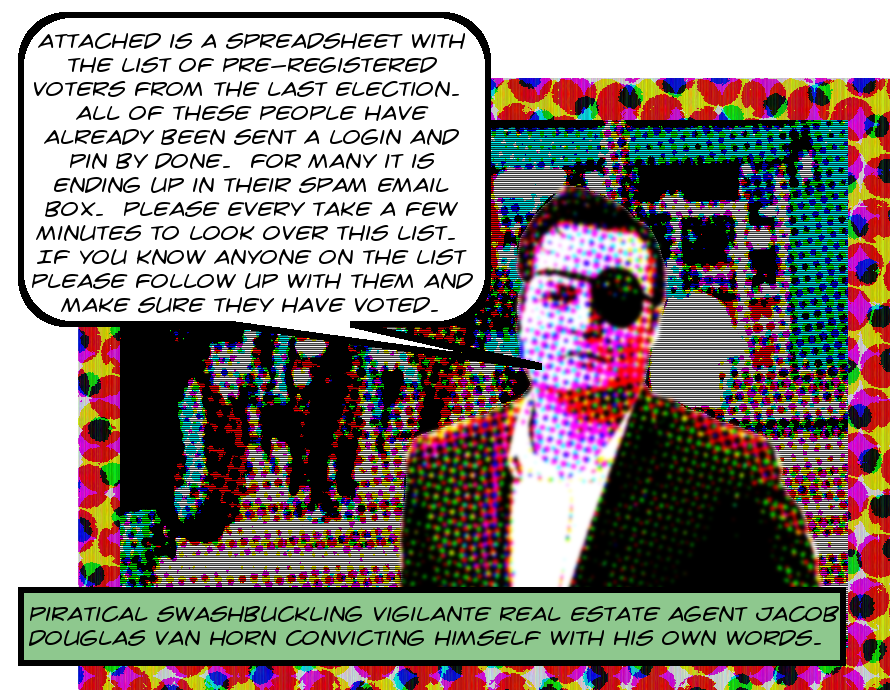 You may recall that one of the major issues raised in the Skid Row Neighborhood Council Formation Committee’s appeal to the Board of Neighborhood Commissioners over probably illegal, certainly immoral, shenanigans in the horrifically shady campaign against the SRNC was the question of whether DLANC had illegally opposed formation by sending out emails via its Mailchimp account. The turning point, though, was when the opposition convinced CD14 repster José Huizar to allow online voting at the last minute and to automatically register all people who’d voted in the last DLANC election.

The fact that Huizar decided to allow online voting meant that contact information for all the automatically registered voters suddenly became very valuable. I haven’t uncovered any new information on the Mailchimp front, but one of the emails from yesterday’s release of records from the Downtown Center BID reveals that on April 3, just three days before the hotly contested election, then-DLANC-Board-member Jacob Douglas van Horn,1 sent DLANC’s copy of the registered voter list to a rogues’ gallery of anti-SRNC conspirators. Here is the email and here’s what it says:

Attached is a spreadsheet with the list of pre-registered voters from the last election. All of these people have already been sent a login and pin by DONE. For many it is ending up in their spam email box. Please every take a few minutes to look over this list. If you know anyone on the list please follow up with them and make sure they have voted.

And turn the page for a discussion of what may be wrong with Jacob Douglas van Horn sending this to his co-conspirators, who those co-conspirators were, and how I know that this is DLANC’s copy of the spreadsheet. 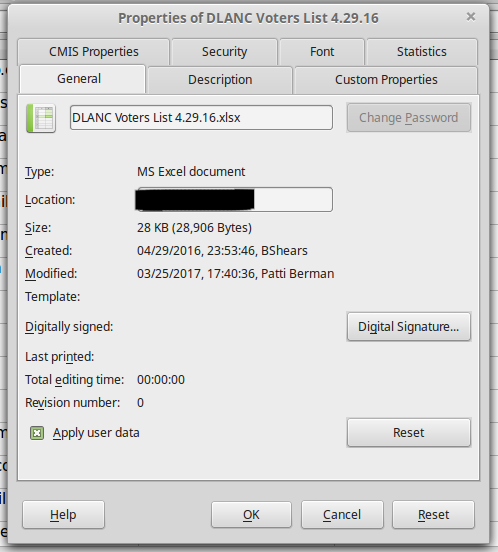 First take a look at the metadata of the spreadsheet. There’s a screenshot of it somewhere near this sentence or you can extract it directly from the document. You can see that it was created on April 29, 2016 by DONE staffer Brett Shears. Much, much more interesting is the fact that this copy was last edited on March 25, 2017 by DLANC Board president Patti Berman. March 25 is eight days before the day that Jacob Douglas van Horn distributed this file to his co-conspirators. Thus he clearly got it directly from her, although there’s no way to know if she knew about it or not.

The big question is, of course, whether Jacob Douglas van Horn broke any rules, laws, or ethical principles by obtaining this document and distributing it to his co-conspirators. My personal opinion is that the file is a public record and should be obtainable via the California Public Records Act. If so then Jacob Douglas van Horn has the same right to obtain and distribute the file as any person. This, however, raises two important questions.

First of all, he obtained it from DLANC in 8 or fewer days. There’s nothing in CPRA that prohibits DLANC from giving it to him this fast, but in practical fact they never do it. In fact, as with all City agencies, it takes DLANC months to organize a response. If Jacob Douglas van Horn used his position with DLANC to jump the line and get this material faster than the SRNC-FC could have gotten it through proper channels, then I think he did something very wrong.

Recall that the election was to be held on April 6. A CPRA request that took DLANC the amount of time to fulfill that it usually takes Patti Berman would have rendered the information meaningless. If Jacob Douglas van Horn were a City employee when he did this he would very clearly have violated LAMC 49.5.5(A), which forbids misuse of one’s official powers to create a private advantage for anyone. The City of Los Angeles takes the position that this code section doesn’t apply to neighborhood council board members and, for all I know, they’re correct in that assertion. However, it’s still evidence that the guy was misusing his position.

Second, there’s the fact that none of the email addresses in the spreadsheet are redacted. Of course, the email addresses are the whole point. Redact them and the document is useless. I personally am of the opinion that they would be rightly unredacted if this document were provided in response to a CPRA request. In my view political communication trumps privacy concerns, if there are any.

I’m not alone in this opinion, by the way, which is why you get all those mailers sent to the address at which you’re registered to vote. The law in California is that even if it’s a violation of your right to privacy to hand out your address to people who want to communicate political messages, that communication is more in the public interest than not releasing your address. This is the same kind of situation.

However, in my extensive experience with CPRA, the City of Los Angeles in general and DLANC in particular don’t willingly go along with this idea. They freaking redact everything. They will not discuss it. They will delay production of responsive materials almost indefinitely while they print out emails, spreadsheets, and other electronic records, and redact them with a freaking sharpie. Getting a spreadsheet like this in native electronic form and unredacted is essentially unheard of.

Again, I think there’s no way Jacob Douglas van Horn could have pulled this off without inside access to DLANC records. Again, whether or not this is against the law, it’s certainly, without question, an instance of his using his official position to create a private advantage for his co-conspirators in the opposition to SRNC formation.

And finally, just because it’s fascinating, take a look at the list of addressees from the email. These are the very people, listed by name and email address, who shot down the Skid Row Neighborhood Council. How proud they must be of their work! So proud that, e.g., Rena Leddy, Blair Besten, and Estela Lopez all used personal email addresses rather than work addresses even though all three of them are clearly working against the SRNC as part of their jobs and all three of them used their work email accounts for communications very like this one. Perhaps they thought they were going to insulate themselves from CPRA with this handy little trick? They’re not!

I will be writing a LOT more about this list in the future, but I know some of my readers know these people a lot better than I do so I wanted to get it out to you as soon as possible. Drop me a note if you notice anything, and stay tuned!

Image of JDvH is ©2017 MichaelKohlhaas.Org and is mashed up from this lil puppy here.

One thought on “It Seems That Piratical Swashbuckling Downtown Real Estate Vigilante Jacob Douglas Van Horn Supplied Anti-Skid-Row-Neighborhood-Council Conspirators With Patti Berman’s Copy Of A DLANC Voter Registration List In Advance Of The Subdivision Election For Purposes Of Electioneering, Thereby Potentially Misusing His Power As A Member Of DLANC’s Board”