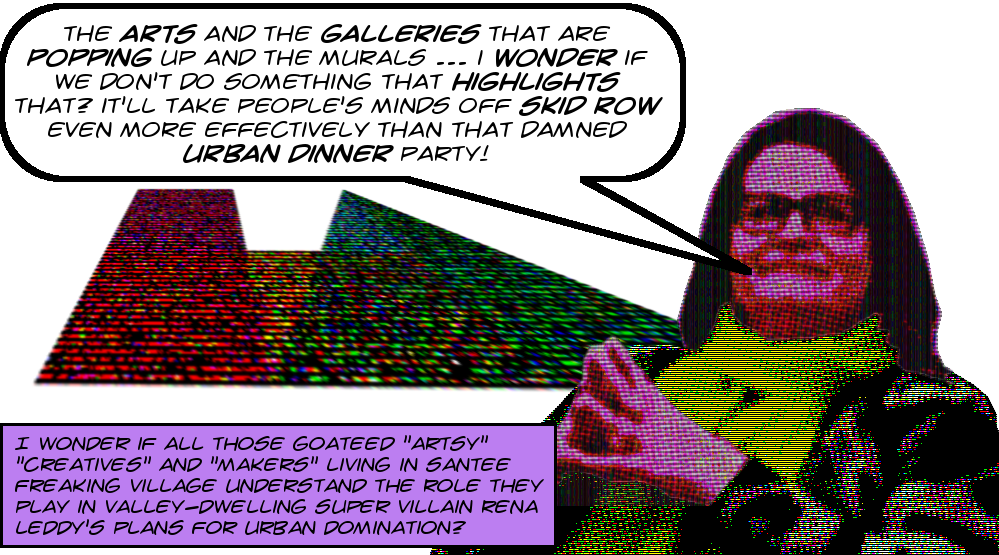 The other day we wrote about Thursday’s fun-filled1 meeting of the Fashion District BID‘s most funnest committee ever, which is to say, the Marketing Committee.2 Today I have a couple more interesting episodes to present to you!

First, Chardonnay-swilling scarf monster3 Rena Leddy began a little discussion with her gang of half-witted henchwomen, notably Laurie Sale, Laurie Rosen, Linda Becker,4 Mark Levy,5 and Ariana Gomez, about how to market the arty-shartsy side of the Fashion District. You can watch it here if you have the stomach for it. There’s no transcription after the break, cause really, it’s too inconsequential to bear.

The main thing about it, though, is its absolutely puerile triviality. They’re all like “EEK, there are galleries, let’s promote them! There are murals, OMG!!” BIDs do an awful lot of this kind of jive, where they take the products and activities of actual human beings, bleach them into a kind of blindingly inoffensive white soup, and then natter on about how unique it all is and how they can use it for their branding efforts or whatever.

And that would all be fine, maybe a little irritating or cookie-toss-inducing, as that kind of tin-eared jargonistic verbal outsplorching will be. It would be, that is, if it were all these BIDs were up to. But it’s not all they’re up to. Not even close.

Just for instance, this very Fashion District BID was involved from the very beginning in the coordinated attack by Downtown Zillionaires on the lawful and rightful efforts by Skid Row residents to form their own neighborhood council in 2017. Rena Leddy herself, along with her weird sisters Blair Besten and Estela Lopez, helped crush the SRNC formation effort by lobbying José Huizar, the Board of Neighborhood Commissioners, and any other City department that would listen to her.6

And Rena Leddy and her creepy posse didn’t just express their opinions on this and that. In fact, they convinced José Huizar to pass the most shameless ad hoc piece of voter suppression legislation this country has seen since freaking Bush v. Gore.7 Also, she participated cheerfully in the recently uncovered anti-SRNC mailing list conspiracy, she regularly violates state and local laws in the course of her paid advocacy, her BID is a defendant in a monumental lawsuit, accused of conspiring with the City of Los Angeles to violate the rights of street vendors, and so on.

So she’s not just a harmlessly irritating Chardonnay-swilling scarf monster sitting around a table of a Thursday morning with her seething gang of likewise bescarfed8 Chardonnay-co-swilling halfwitted henchwomen mumbling on about the marketing potential of artsiness. She’s also a criminal who’s paid to flout laws right and left no matter who gets hurt. And the homeless, the street vendors, even Latinos in general, who don’t really seem to fit in to Rena Leddy’s new plans for her demesne, they’re getting curb-stomped by the BID even as the marketing committee sits around blipping mindlessly on about creatives and galleries and murals and whatnot.

The world she creates Downtown includes not only artsy marketing, not only painfully hip restaurants with arrestingly well-plated bits of goop, not only clean-favored and gracious black masses of gentrification, but arrests, blood, pain, death. As a very wise fellow might have said about Rena Leddy, seeing as he said it about a bunch of creepy hypocrites amongst whom she would have fit right in:

Woe unto you, Rena Leddy and BIDdies of Los Angeles, hypocrites! for ye are like unto whited sepulchres, which indeed appear beautiful outward, but are within full of dead men’s bones, and of all uncleanness.

So that’s it, really. Everything’s all clean and nice with these people, but they’re making a living by drinking blood, no matter how freaking cute and vivacious they may seem to be. It’s important not to forget any of that, not even for a minute.

It’s also important not to forget that I’ve been promising for, like, forever now to prove to you that creaky-voiced marketing maven Ariana Gomez is, by her own admission, way, way freaking smarter than freaking Kylie Jenner, and, as you know, that’s really freaking smart.

Don’t believe me? It’s true. Watch and listen here as Ariana Gomez9 tells the rapt gang of henchies about how she presciently dumped Snapchat before anyone else in the entire freaking universe even, like, knew there was a freaking problem:

And Snapchat we … decided to sundown. It was a decision I made and given the criticism of Snapchat I think I made the right choice cause it was around the time that Instagram stories came out and I looked at it and I said … this is not worth it for us any more. And so, we still have our account and we’ll keep it, but we’re not actively posting to it.

According to the Wiki, Instagram Stories came out in August 2016, but, as all the world knows by now, Kylie Jenner didn’t jump on the antiSnap bandwagon until February 21, 2018. Good thinking, Ariana Gomez! Of course, Ariana Gomez’s decision probably didn’t vaporize $1.3 billion in market capitalization in about thirty seconds. Goes to show that being smart isn’t everything, I guess. And that’s the story, friends. More soonest, so stay tunest!

Image of Rena Leddy is ©2018 MichaelKohlhaas.Org. The logo is a modification of this.