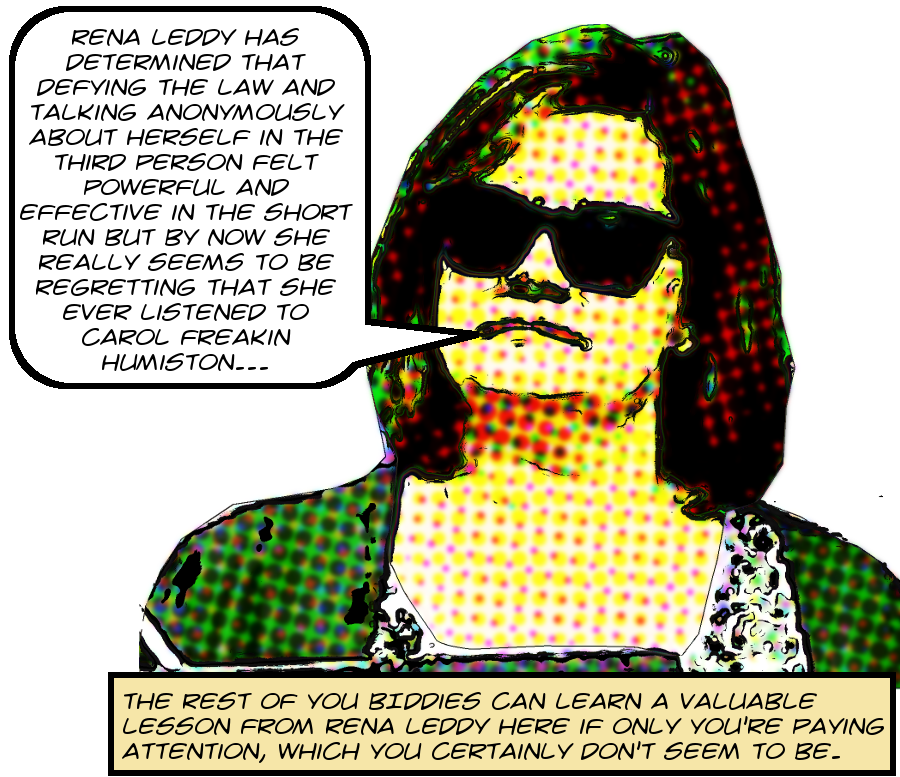 On August 15, 2018, faced with Rena Leddy’s unhinged intransigence and chronic disregard of the law, I was forced to file a petition asking a judge to require the Fashion District BID to comply with the California Public Records Act. Most of the petitions I’ve filed recently have had only to do with BIDs ignoring my requests altogether1 but this one raises interesting and possibly novel issues of how exemptions to the CPRA are to be interpreted in general and in Los Angeles in particular. I’m represented by Abenicio Cisneros and Karl Olson.2

There are four classes of records at issue in this petition. Those are:3

Rena Leddy claimed either that such records didn’t exist or that, if they did, the BID could withhold them on the basis of the so-called deliberative process exemption.4 In each of the four cases either there’s independent evidence that responsive records exist or else it defies belief that no records exist. For instance it is not plausible at all that Linda Becker, chair of the BID’s renewal committee, does not possess a single email relevant to the conduct of the BID’s business.5

Thus the petition focuses on debunking the exemption claims as it’s going to be hard for the BID to argue that no records exist. Turn the page for some details and some transcribed excerpts!

First, let’s talk about the putative deliberative process exemption. The idea generally is that under limited circumstances public agencies can withhold records that expose their purportedly candid decision-making process so that they won’t be inhibited by the possibility of being mocked on the internet. It’s not one of the enumerated explicit exemptions to be found in the CPRA, but rather a court-made elaboration of the so-called “catch-all exemption” found in the CPRA at §6255(a):

44. The California Supreme Court has recognized a deliberative process privilege under §6255 to prevent injury to the quality of executive decisions. See, e.g., California First Amendment Coalition v. Superior Court (1998) 67 Cal.App.4th 159, 169. The key question in every case is “whether the disclosure of materials would expose an agency’s decision making process in such a way as to discourage candid discussion within the agency and thereby undermine the agency’s ability to perform its functions.” Id. at 170 (internal citations omitted).

46. Thus, the BID, in order to justify its withholding under the limited, qualified deliberative process privilege, must show that disclosure of all withheld records would implicate concerns regarding the deliberative process, and that the public interest in nondisclosure clearly outweighs the public interest in disclosure. As will be shown below, Respondent cannot meet this burden.

The idea generally is that everything having to do with the BID’s attempts to influence City action is of great public interest. This kind of material is always of public interest, but it’s possible that in Los Angeles the public interest is heightened and made more weighty due to local ordinance. As you may recall, the Los Angeles Municipal Lobbying Ordinance at §48.01 contains a powerful statement to this effect:

The citizens of the City of Los Angeles have a right to know the identity of interests which attempt to influence decisions of City government, as well as the means employed by those interests.

The idea is that insofar as the Fashion District BID has raised a claim of deliberative process to justify withholding records having to do with influencing the City of Los Angeles they’re never going to be able to overcome this extremely strong assertion of the public interest in knowing what they’re up to. You might remember that I first outlined this theory last year here on the blog. This is its first, but almost certainly not last, trial run in the real world.

And most if not all of what I requested is directly related to influencing the City. As you may recall, the process of renewing a BID requires convincing the City of Los Angeles to pass two separate ordinances. Part of the BID consultant’s job is to get those ordinances passed, which means that the UPC emails have that heightened public interest given in the Lobbying Ordinance. As stated in the petition:

Also, board member Linda Becker is (or was) the chair of the BID’s renewal committee. There’s essentially no chance that at least some of her unproduced emails have to do with the renewal and therefore with influencing City action. Finally, board chair Mark Chatoff was intimately involved in last year’s despicable BID-managed anti-Skid-Row-Neighborhood-Council effort. For instance, see this March 20, 2017 email. DLANC was also deeply implicated in the anti-SRNC effort as well.. The point is to influence the City to prevent the formation of the SRNC, which again implicates the heightened public interest created by the Lobbying Ordinance.

So that’s roughly what’s happening with the Fashion District BID. The whole petition is excellent. It’s a fine piece of writing and you might well profit from reading the whole thing. And of course, stay tuned for future developments!

Image of Rena Leddy is ©2018 MichaelKohlhaas.Org and is kinda sorta semi-ish cousins with this Rena Leddy ovah heeya.