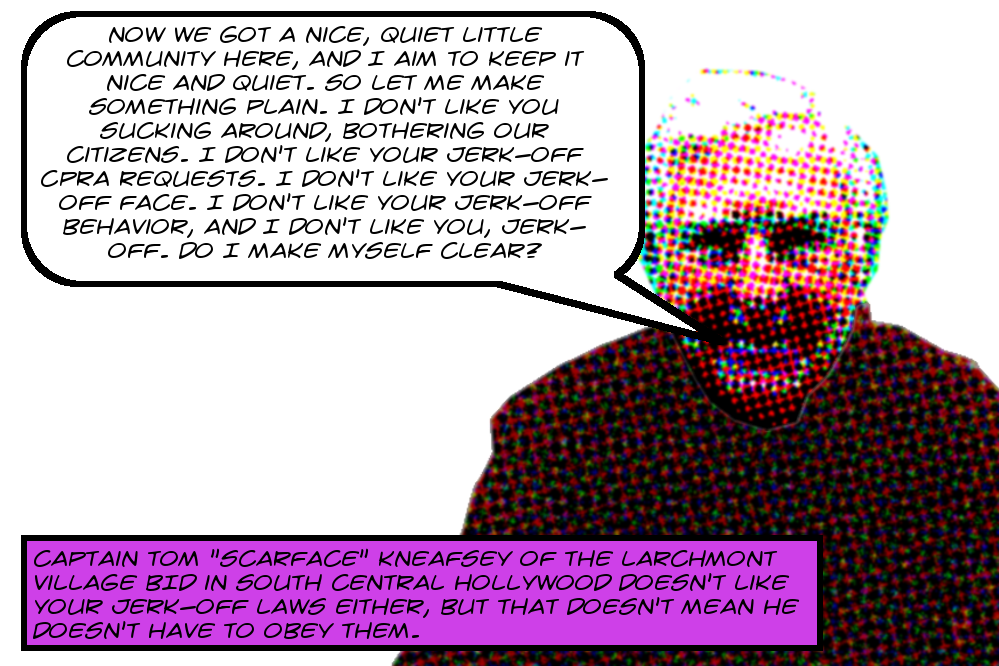 As you may recall, they’ve never managed to comply with the damn Brown Act, despite occasional signals that either they were going to start complying or maybe that the City of Los Angeles was going to force them to comply. And after that one time in 2016 they’ve never managed to comply with the CPRA again. I sent them a few requests in May 2017 which they ignored and ignored and ignored.

And so, as before, I hired a lawyer. And the lawyer filed this petition in Los Angeles County Superior Court. And served the petition on Tom Kneafsey earlier this week. And served a letter to Cap’n Tom along with the petition. I wish there was some way to get these BIDdies to follow the law other than by filing petitions against them but the State Legislature, in its inscrutable wisdom, has made this the only remedy. Sad but true. Stay tuned for more information and turn the page for some excerpts from the petition.

1. This is a suit to enforce the California Public Records Act (“CPRA”) as to basic,
easy-to-provide information regarding the operations of the Larchmont Village Property Owners Association, a.k.a. the Larchmont Village Business Improvement District (“the BID”.) The BID has disregarded its duties under the CPRA and has withheld various public records which are not exempt from disclosure and which must be provided upon request.

2. The BID’S continued flouting of the CPRA by its refusal to release records in response to Petitioner’s requests casts a veil of secrecy over matters as fundamentally public as the BID’s communications with the City of Los Angeles and the Los Angeles Police Department, the contract between the BID and the consultants who lobby the City on its behalf, and records from the BID’s board meetings, such as agendas, minutes, and distributed materials.

3. The public has a strong interest in the withheld information and the BID, along with
the property owners it represents, must cease to subvert the public virtues of transparency and open government, and must no longer violate Petitioner’s statutory right to the requested records.

4. Therefore, by this petition and pursuant to the Code of Civ. Procedure §§1085, et
seq. and Cal. Gov’t Code §§6250, et seq. Petitioner seeks a writ of mandate to enforce the CPRA by compelling the Larchmont Village Business Improvement District to locate and produce the requested records.

10. These requests, discussed in more detail below, sought easy-to-provide public records such as communications to the City of Los Angeles, agendas and minutes from BID board meetings, and materials distributed at BID board meetings. To date, Petitioner has not received even a single record in response to these three requests.

Request #1: communications with the City of Los Angeles; minutes of certain BID board meetings; and the BID consultant contracts

11. On April 16,2017, Petitioner submitted a CPRA request (“Request #1”) to the BID for three categories of records. Petitioner emailed the request to BID manager Dolan, BID President Kneafsey, and BID Co-Executive Director Boylston. A true and accurate copy of the email containing Request #1 is attached as Exhibit A.

12. First, Request #1 sought emails “between anyone at the Larchmont Village BID, staff and board, and anyone at either lacity.org or lapd.online from between January 1, 2016 and March 31, 2017.” The request included details as to what was meant by “emails between,” and guidance as to the format in which the requested emails should be provided. See Exhibit A.

14. Third, Request #1 sought contracts between the BID and any consultants it used during its most recent renewal process. See Exhibit A.

18. Records obtained from the City of Los Angeles via a public records act request indicate that responsive records exist. For example, the Los Angeles City Clerk’s office sent Kneafsey an email on January 4, 2017, informing Kneafsey that the BID’S annual planning report was approved. Find a true and accurate copy of that email attached as Exhibit E.

19. As of this writing, it has been 335 days since Petitioner submitted Request #1 and, to date, the BID has not made a determination of disclosability, has not indicated whether responsive records exist, and has not provided any records in response to Request #1.

Image of Captain Tom Kneafsey is ©2018 MichaelKohlhaas.Org and is a highly modified recontransheterofigurativitudinous indubliflication of this little item right here.