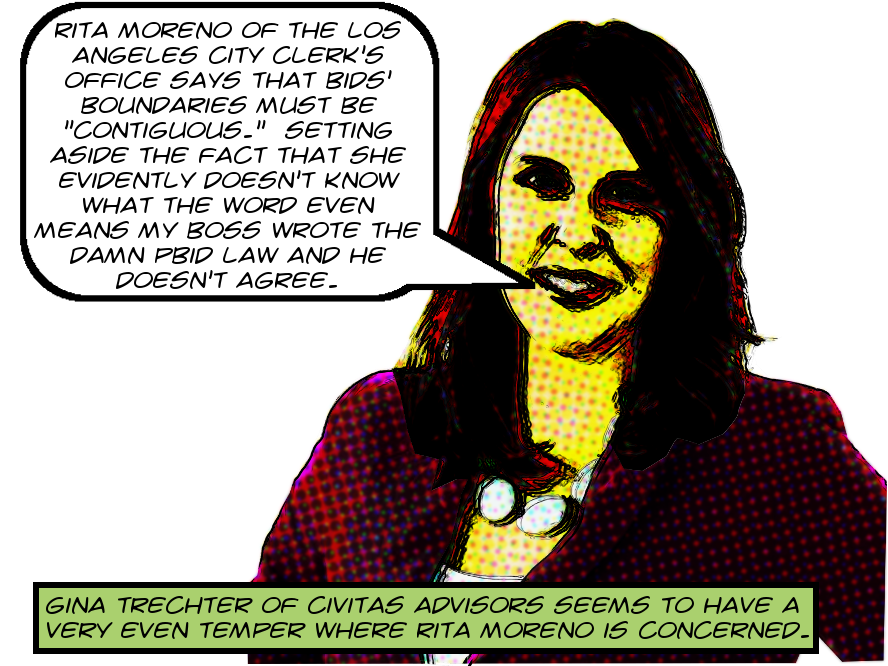 OK, I’m sorry, this post is on kind of a technical subject, but I think it’s important and also it reveals a kind of weird off-handed incompetence amongst the City Clerk’s BID analyst staff that I think is worth memorializing. The central issue is whether the Property and Business Improvement District Act of 1994 requires a BID to be in one piece. I’m going to use the technical term “connected” here.1

It’s not just an idle question, either. You may recall that the proposed Hollywood Route 66 BID runs up Santa Monica Blvd. from Vine Street to Hoover Street. The problem is that Vermont Avenue crosses Santa Monica right in the middle of that stretch, and every building that touches Vermont is already included in the East Hollywood BID.

Regardless of what the PBID law has to say about connectedness of BIDs, it’s very, very clear on the fact that BIDs can’t overlap.2 Hence commercial buildings on both Santa Monica and Vermont must be excluded from the Hollywood Route 66 BID, which leaves its territory disconnected. Plausibly, also, the EHBID could cede those buildings to the Route 66 BID, but, interestingly, doing so would leave the EHBID disconnected, so nothing would be gained. Here’s a copy of the map if it’ll be useful.

Thus a correct understanding of what the law allows is essential for the formation of at least that BID, and probably others in the future. And I’m not a lawyer, but I read the whole damn PBID law about a zillion times and the connectivity of a BID is not mentioned in there at all. It’s my not-a-lawyer understanding that if a law doesn’t explicitly forbid something then that something is allowed.

But the famous Rita Moreno of the City Clerk’s Neighborhood and Business Improvement District division didn’t agree with me in 2017! Then she did agree with me in 2018! And Misty Iwatsu spent some time in 2016 babbling on about the matter and thought 2017 Rita Moreno was right! And Rita Moreno didn’t just think, she advised! And it strikes me that her advice looked an awful lot like practicing law without a license, which is illegal in California!3

And of course you want to see details! And primary sources! Turn the page and there they are!!

Before we get into the gritty technicalities of BID formation, let’s take a soothing detour into the gritty technicalities of the meaning of the word “contiguous.” According to Cambridge, it means: next to or touching another, usually similar, thing. In particular, not only does it not mean “connected” in the topological sense, but it’s clearly not possible for a single thing to be contiguous. Like the borders of a BID. The borders of a BID are one single thing, so not eligible for contiguity. You have to have at least two of them. Keep that in mind when reading what follows.

Let’s take this jive in chronological order. And I think I neglected to mention at the time that I recently obtained a nice set of minutes from the Lincoln Heights BID?4 Well, I did so obtain, and you can look at the whole set here on Archive.Org. But the one we care about is from June 17, 2016, wherein we read, in Exec Direc Misty Iwatsu’s report:

BID Renewal- Contract ends 12-31-18. Renewal money needs to be budgeted. Get three proposals for engineering Report including Ed Henning. Only boundary change might be removing a couple of houses at Ave 26 and Workman. Main not included because the boundaries must be contiguous. The City required an outside consultant but can do in-house.

By the way, if you’re interested in what she’s talking about, you have to recall that in Lincoln Heights both Broadway and Main Street run East/West with Main about half a mile South of Broadway. Most of the blocks between them are purely residential and so cannot be included in a BID.5 The present BID runs along Broadway essentially from the 5 to Lincoln Park Avenue. Thus including the business district along Main would require a disconnected region. Here’s a map, if that’ll help.

Now let’s fast forward to October 2017, when Rita Moreno sent this email right here to Gina Trecher of Civitas Advisors, the BID consultant hired by the City to put the Hollywood Route 66 BID together. You can read it below, but the gist is that she’s telling Gina Trecher that the BID has to be connected so it can’t run to Hoover Street.

I’m looking up the law to find out.

And keep in mind who runs Civitas and who is, therefore, Gina Trecher’s boss. It is, of course, the famous John Lambeth, the man who wrote the damn PBID law in the first place.6 Wouldn’t it display infinitely more politesse to say something like “I’m under the impression that BID boundaries have to be contiguous [sic] but maybe you could ask your boss, who WROTE THE DAMN LAW IN THE FIRST PLACE?!”

In any case, something happened, maybe John Lambeth gave her a little talking to, because by January 2018, just a few months later, Rita Moreno sent this little email to Taylor Bazley, the world’s smartest field deputy just ask him,7 in which she states definitively that “And there is no legal requirement that the boundaries be contiguous.”8

Talk about chutzpah, amirite? She didn’t say “And there is no legal requirement that the boundaries be contiguous but for years I also thought there was!” She didn’t even acknowledge the exceedingly likely possibility that Taylor Bazley caught the contiguity disease from her, since e.g. he’s using the same wrong word for it that she uses. And that, my friends, is the whole sordid story! Make of it what, as always, you will!

Oh, p.s.! I was going to write about Rita Moreno practicing law without a license, and I really believe that that’s exactly what she’s doing here. But this is too long, it’s late, and you can read about it yourself in the Business and Professions Code at §6125 et seq.

Image of Gina Trechter is ©2018 MichaelKohlhaas.Org and was obtained like a phoenix rising from the ashes of this lil item right here-io.