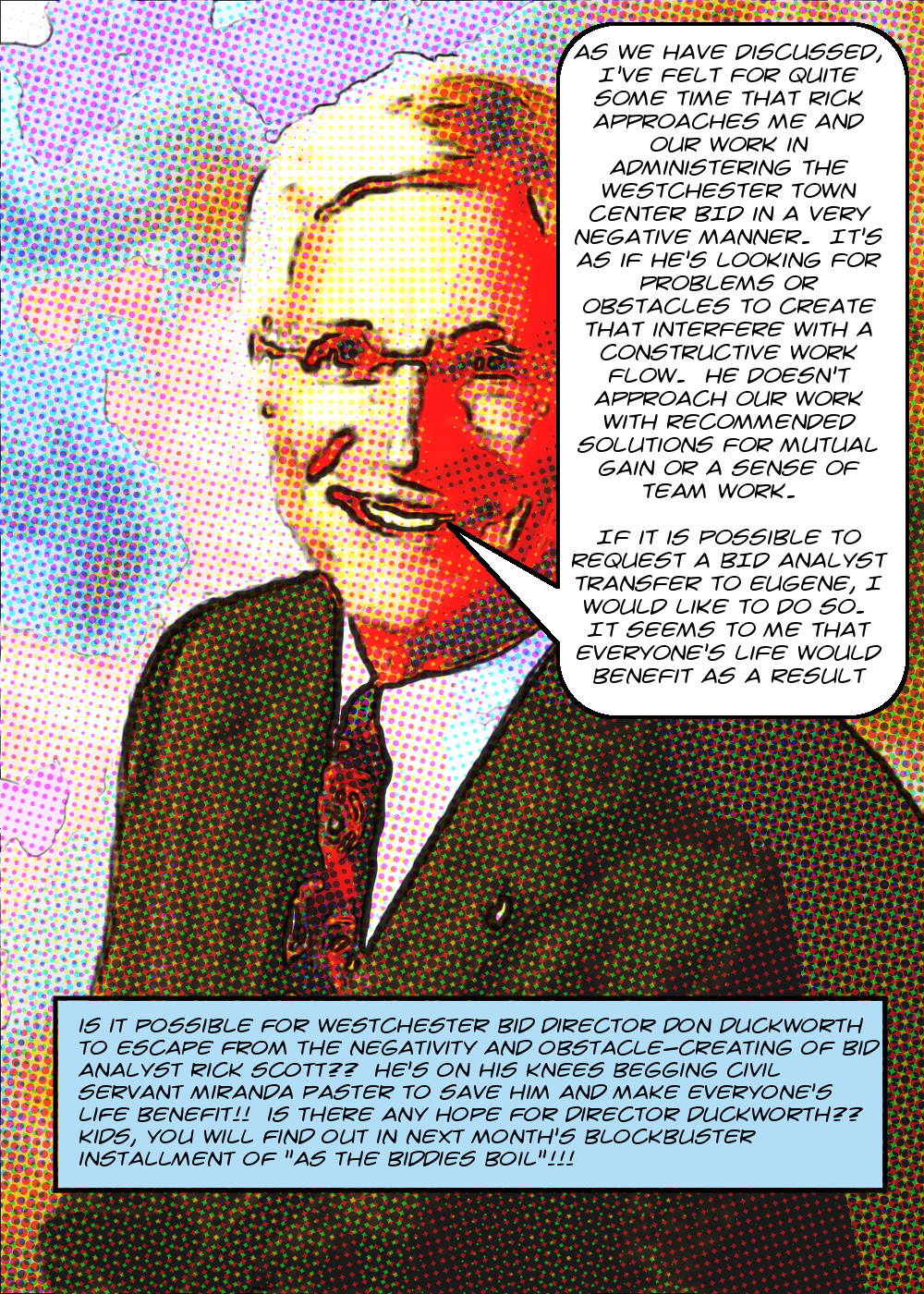 Just yesterday, Mr. Don Duckworth of the Westchester Town Center BID sent me a big steaming heap of emails, comprising the BID’s correspondence with the City of Los Angeles for 2016.1 I am here to tell you, there is a ton of good stuff in there! This is very, very exciting! I will be writing about items from this release for a good while to come, and the City Ethics Commission is going to be hearing about a whole lot of it as well! But this evening, in addition to this general announcement that the material is available, I want to share a gossipy little item from January 2016, which has its locus classicus right here in this email from Don Duckworth to Miranda Paster.

It seems that WTCBID Boss Man Duckworth wasn’t too happy with BID Analyst Rick Scott, felt that he “approaches me and our work in administering the Westchester Town Center BID in a very negative manner.” In fact, sez Le Duckworth, “[i]t’s as if he’s looking for problems or obstacles to create that interfere with a constructive work flow.” Not only that, but, according to the Donald, “[h]e doesn’t approach our work with recommended solutions for mutual gain or a sense of team work.”

And what’s Don Duckworth’s recommended solution to this negativity and problem-slash-obstacle-seeking behaviour? Why, “[i]f it is possible to request a BID Analyst transfer to Eugene, I would like to do so.” Of course, “Eugene” is Eugene Van Cise, famous in these parts for having ridden his bike around the Gateway to LA BID inspecting their litter. No wonder Don Duckworth likes him better than Rick Scott who, as far as we know, does not do two-wheeled litter inspections of his BIDs. So turn the page for some speculation on why Donald Duckworth is so down on Rick Scott, for a transcription of the email if you’re PDF-aversive, and for a link to Miranda Paster’s reply!

First, why in the world is The Donald so upset with Mr. Rick Scott? Well, I don’t yet have enough evidence to be sure, but that won’t stop me from speculating!2 Rick Scott, of course, is famous for his laconic manner when dealing with BIDdies. For instance, take a look at this email from Rick to Donald about the WTCBID’s newsletters:

Don,
Please submit the 2015 4th Quarter report and newsletter for the Westchester Town Center BID that was due 1/31/16. I will not be able to process any invoices until the BID is in compliance with its contract.
Please contact me if you have any questions.
Thank you.
—
Rick Scott
Neighborhood and Business Improvement District Division

It’s true that this is from February 2016 and Don Duckworth was already asking to get Eugene instead in January, but it’s got to be characteristic. Of course, this email does have a somewhat threatening tone, but it’s not Rick Scott’s fault. This was obviously part of Miranda Paster’s famed newsletter compliance drive of 2016 in which3 she decided that all BIDs had to get up-to-date with their newsletters or face City withholding of their money. And anyway, why does Don Duckworth expect kissy-face BID analysis? According to the City’s own literature, e.g. the BIDs 101 handout,

The Office of the City Clerk holds a contract with every BID and monitors their operations. Through reporting and regular audits, they ensure that each is operating correctly.

What’s Rick Scott doing other than what the City is meant to do with its BIDs? But of course, the BIDs haven’t been used to being monitored and overseen. They’re probably not used to it even now.

So anyway, Miranda Paster wrote back less than two hours later, essentially saying OK, she will get Rosemary Hinkson to do it, and a mere seven minutes later,4 Mister Donald wrote back thanking her. It doesn’t mean much, I suppose, but isn’t it interesting how the putatively regulated treat their putative regulators? Not as people who have not only the power, but the right and, in many cases the duty, to shut them down for their transgressions. It is yet another example of the extreme regulatory capture of the Clerk’s Neighborhood And Business Improvement Division by the BIDs themselves.

Here’s the whole discussion, taken from the last email:

> I will work w/ Rosemary on this. She should be back tomorrow.

>> As we have discussed, I’ve felt for quite some time that Rick approaches me
>> and our work in administering the Westchester Town Center BID in a very
>> negative manner. It’s as if he’s looking for problems or obstacles to create
>> that interfere with a constructive work flow. He doesn’t approach our work
>> with recommended solutions for mutual gain or a sense of team work.
>> If it is possible to request a BID Analyst transfer to Eugene, I would like to do
>> so. It seems to me that everyone’s life would benefit as a result.

>> Thanks for your consideration of my request. You can always count on my
>> full support regardless of your response to this request. Thank you.

Image of Don Duckworth started its life as a public record available here, and now it’s all grown up and also is ©2017 MichaelKohlhaas.Org.