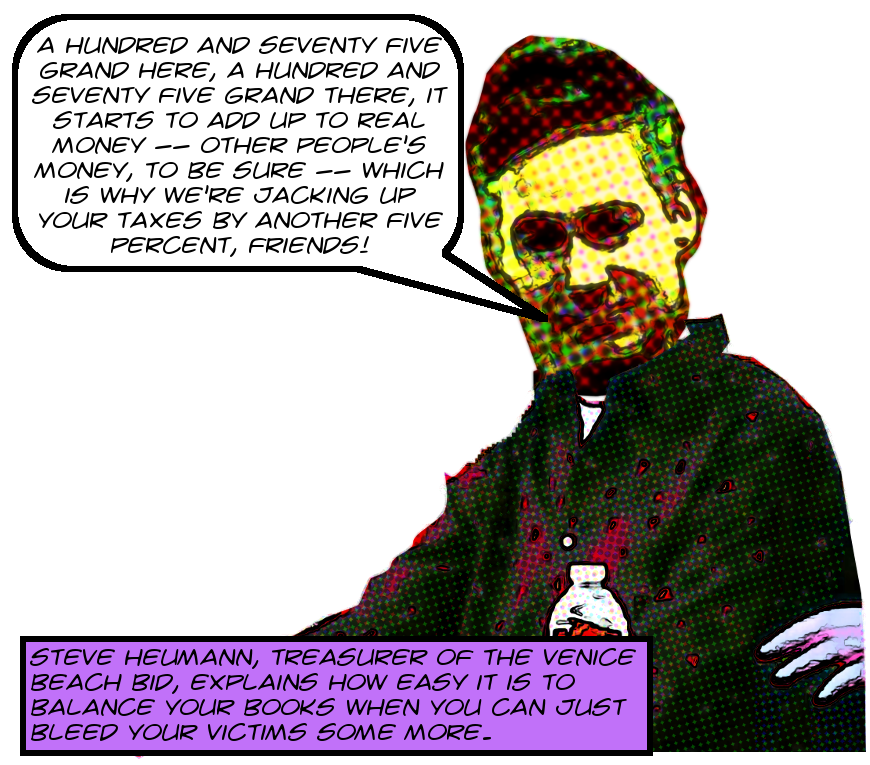 Last Wednesday the Venice Beach BID board of directors met. I was able to attend and record video of the entire dark and bloody ritual, which you can watch either on YouTube or else on Archive.Org depending on which way your pleasure tends.1

Anyway, the most sinister part was the fact that the board voted to raise assessments 5% for next year. You can watch the actual vote here — it was five to one, with useful idiot and legitimacy-lender Connie Brooks voting against despite Mark Sokol’s unsuccessful attempt to bully her into abstaining.2 This from a BID which didn’t start operations until far more than a year after it was created and did so little its first year that the City forced it to refund everyone’s money.

As late as March 2018 the City was still having to threaten this BID with disestablishment due to its inability to meet even the most basic terms of its contract. These are the people who are boosting everyone’s taxes by 5% next year. And what do they need that money for given that they have not actually done anything with all the money they’ve already bled out of the people of Venice?

Well, for one thing, they’ve got to pay their damn lawyers. Watch and listen here as BID bossbaby Steve Freaking Heumann admits on camera that so far they’ve paid out $172,000 to defend against a lawsuit that was only brought because of Tara Freaking Devine’s arrogance and incompetence. Who knows how much they’re going to pay for the other lawsuit pending, brought unwillingly, also due to Tara Freaking Devine’s arrogance and incompetence.

And how much is the shadowy one earning for being a lawsuit magnet, you might legitimately wonder? Well, at this meeting, for the very first time, it was revealed by Steve F. Heumann that her total annual compensation is $167,000 per year, which included 2017, when the BID didn’t do anything at all. No wonder they need to raise assessments by 5% per year. Gotta pay the staff, friends, regardless of whether they work!

And there was some interesting action in the audience as well, which I couldn’t really record, only having one phone with me. First of all, watch here as George “demonic goatee” Francisco jizzes joy-juice all over his BID board buddies cause he just loves them that damn much. But that wasn’t the interesting part.

The interesting part was after he was done exspurting himself about the greatness of the BID, he and Taylor Bazley, who is Mike Bonin’s sneaky little creeper of a Venice field deputy, snuggled up in a corner and, ignoring the whole ongoing meeting, whispered in one another’s ears for what seemed like hours. Who knows what they were plotting, but whatever it was it bodes nothing but ill for Venice. Not that there’s much left to destroy, but whatever. Anyway, that’s my superficial report on the meeting. More to come eventually!

Image of Steve Heumann is ©2018 MichaelKohlhaas.Org and is fiddled over starting with a screenshot from circa here.