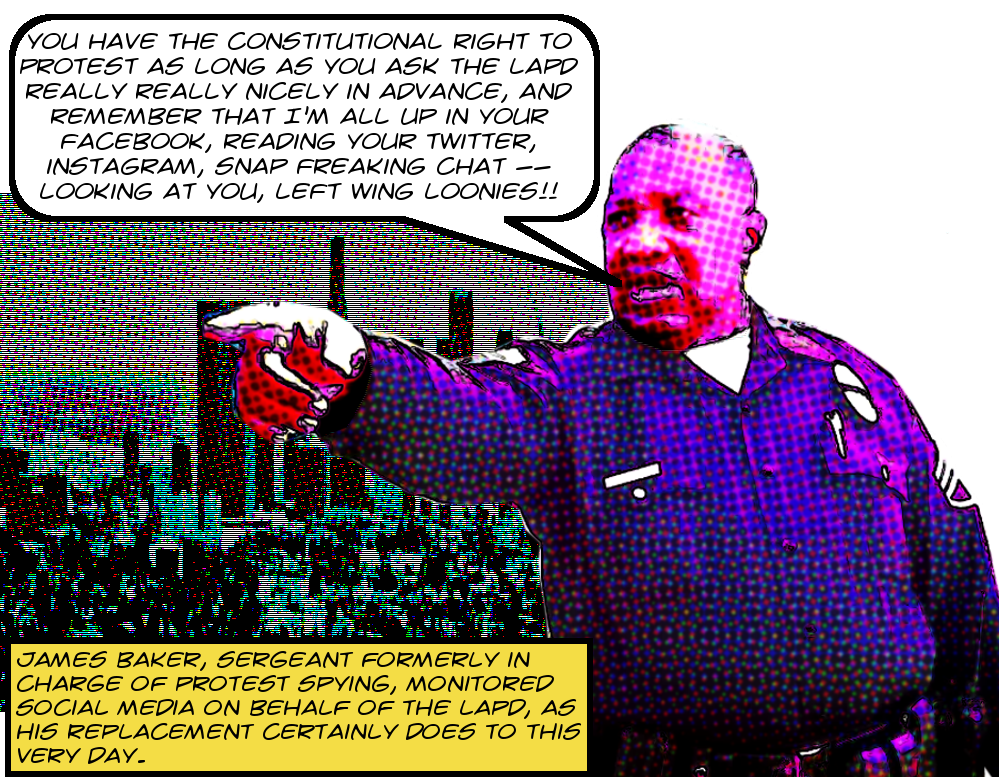 This is just a short note to discuss this email chain, which I recently received from the Historic Core BID as part of the fruits of a public records act request.1 It seems that last year, some group called Code Pink was planning a protest in Pershing Square on April 29, 20172 and they did not ask the permission of the LAPD. Even more interestingly it seems that the LAPD has officers dedicated to “monitoring social media” who track this kind of thing.

And one of them, James Baker, emailed a bunch of his fellow polices on April 22, 2017, to fill them in on the upcoming reign of anarchy Downtown. He mentioned explicitly that Code Pink was not cooperating with the LAPD, that there was no discussion of any civil disobedience, and that his officers would “continue to monitor social media for updates.”

Also interesting is the fact that four of the recipients were with the Department of Homeland Security.3 Another was Senior Lead Officer Michael Flanagan, who turned around and emailed batty little fusspot Blair Besten of the Historic Core BID, Brian Raboin of the Downtown Center BID, and Banyon Hutter of Allied Universal Security.

The record doesn’t show what,if anything, the BIDs did with the information, but it’s worth keeping in mind that this is happening. If you’re an activist, if you use social media to coordinate your events, don’t forget that the cops are reading it too, the BIDs are reading it, BID security is reading it, and they’re all coordinating with each other. Plan accordingly. Turn the page for transcriptions of the whole email chain and some additional discussion.

The whole thing begins with an April 22, 2017 email from Sgt. James Baker to a whole bunch of people:

Multiple crises are threatening the people of our communities, our country, and our world, and menacing our very planet. Military and climate wars are destroying lives and the environment, and creating enormous flows of desperate refugees. Violent racism, Islamophobia, misogyny, homophobia and other hatreds are rising. Show up for peace and justice. Rise, Love and Resist with us this day

· No discussion of any civil disobedience

· A voice message was left for the group to call us and We sent them an email.

· We will continue to monitor social media for updates

Before his retirement in September 2017, James Baker was evidently some kind of protest specialist with the LAPD, often called out to mediate and/or discuss things with protesters. E.g. here he is talking with abortion rights protesters, and here with Ferguson protesters. Note in particular how the LAPD Special Events Unit will “continue” to monitor social media for information about this protest. A couple days later, SLO Mike Flanagan4 replied:

Is this staying at Pershing Sq or moving to City hall like the others. Mike

we do not know the group is not talking. I just want the SLO for the area to be aware

And a few minutes after that, Mike Flanagan sent the info to a few of his favorite BIDdies:

Subject: FW: PEOPLE”S CLIMATE MARCH IN LOS ANGELES-WAR IS NOT GREEN
From: Michael Flanagan <24857@lapd.online>
Date: 04/24/2017 01:02 PM
To: Banyon Hutter <Banyon.Hutter@aus.com>, Brian Raboin
<braboin@downtownla.com>, “Blair Bestin (blair@hdlabid.com)”
<blair@historiccore.bid>
Hello all, I just received this info for a possible march on Saturday. This group is not
cooperating with our Special Events unit. We do not know if they are going to just rally
at the park, or march some place. Our Special Events Unit and Central assets will be
monitoring the group. Just a heads up. Mike
Sergeant II Mike Flanagan
Los Angeles Police Department
Officer in Charge
Senior Lead Officer and Community Relations Unit
Central Area
(213) 486-1164 (Office)
(213) 793-0735 (Cell)
(213) 489-7534 (Fax)
24857@LAPD.ONLINE
Follow on Twitter: @SgtFlanaganLAPD

And what the BIDdies did, if anything, with it, has not yet come to light. However, there are important lessons to be learned here. As we know, BIDs also do some monitoring of social media. The Highland Park BID is freaking famous for this, for instance. And the LAPD, of course, talks to the BIDs. And the BIDs talk to the LAPD. Everybody’s talking to everybody out there, and they’re all reading your Facebook, even though they’re obviously not your friends. It’s just worth keeping in mind, you know?

Image of Sgt. James Baker is ©2018 MichaelKohlhaas.Org and was made from this James Baker and this picture of the only City that matters.