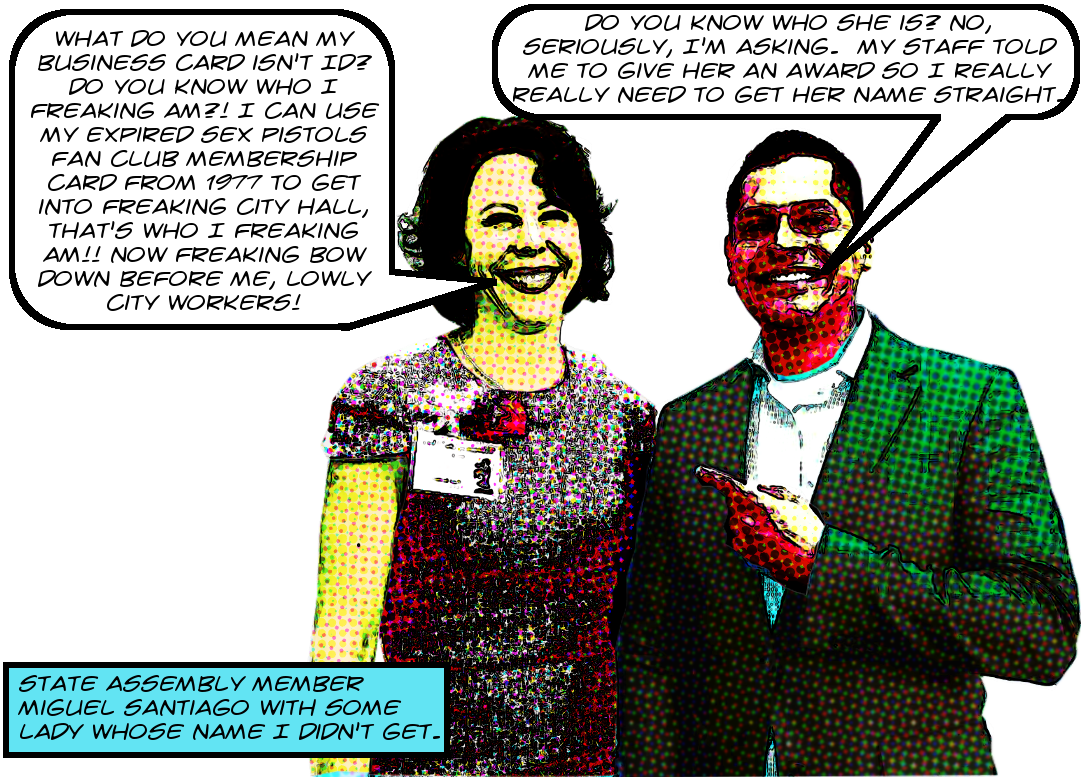 Here’s the whole story in a nutshell, taken from this fabulous little gem of an email exchange (of course there’s a transcription after the break!) On April 3, 2017 Blair Besten, batty little fusspot director of the Historic Core Business Improvement District, third weirdest of the minor Downtown BIDs, tried to register online to vote against the Skid Row Neighborhood Council in solidarity with her fellow zillionaires and their minions. As I’m sure you’re aware, registering to vote online at that time required one to upload a photo of an ID. Blair Besten uploaded a picture of her business card instead.

Not acceptable, said the Department of Neighborhood Empowerment! So then DLANC president-for-life Patti Berman1 and weirdo-about-town, male-for-rent, and some kinda damn social worker Bob Freaking Newman2 emailed everybody saying please guys! Let Blair Besten register please!! And not only that, but Patti Berman used her dlanc.com email address during the conversation even though DLANC was required by City law to be neutral. Helping Blair Besten register is not neutral.

And then Grayce Liu, the famous führerin of DONE, said OK! Even though people who think their business card counts as ID usually have to show up in person to vote we will make an exception for Blair Besten! If she uploads her real ID in the next 51 minutes we will allow her to vote online!! And she did!! So she got to vote!! Mission accomplished and those are some helpful-ass City Officials, amirite?!

Oh, but of course, now we gotta start the negativity.3 See, the SRNC famously lost the election by only 60 votes. What I would really like to know is whether or not there were 61 pro-SRNC voters who messed up online registration and were not given personalized help and extra chances by Grayce Liu and her staff? Who were told according to the rules to vote in person but subsequently were unable to do so? Obviously we’ll never know because it’s not possible to keep records of that kind of thing.

This is yet another reason why it’s essential for the City to follow the rules, whether or not Patti Freaking Berman and Bob Freaking Newman are pleading with them not to, just this one time. Bending rules for some people and not for others can affect outcomes in completely unpredictable ways.

Even giving Grayce Liu the benefit of the doubt by assuming that she wasn’t purposely trying to throw this election at the behest of José Huizar, the Dracula of Downtown, allowing exceptions like this could very easily have changed the outcome. And whether or not she was purposely trying to throw the election her actions, like this one, like the illegal pop-up polls she allowed, and so on, clearly create an impression that the election was unfair.

And what in the world was Patti Berman thinking? She’s famous for having said during the SRNC election appeal that if she only knew who the anti-SRNC conspirators associated with United DTLA were she’d kick them all off DLANC. And Bob Newman was right in the heart of the conspiracy and here’s Patti Berman teaming up with him to get rules broken for her hapless boss, who doesn’t even know that her business card isn’t ID. How is that even reasonable, Patti Berman?

Finally, this little email chain is part of an unbelievably rich and massive dump of material from the Department of Neighborhood Empowerment. It was obtained by a citizen of Los Angeles via the California Public Records Act and subsequently made available to me. There’s so much more in there, friends, I will be writing on this material sporadically for a long, long time. Stay tuned!

Transcription of the email chain:

Blair was rejected correctly. She sent 2 pictures of a business card with one that was saved as “ID.” Even though we are asking rejected folks to go to the Pop-Up Polls or the election day, I’ve told staff to tell her that if she sends a picture of her ID today, we’ll verify her online still. Please pass that message to her and have her take a picture of her photo ID and email it to us at elections@empowerla.org by 5 pm today. Otherwise, she will have to go to the Pop-Up Poll or election polling location to vote. Thanks!

Just wanted to confirm that Blair did send her driver’s license and will now be able to be verified. Thank you all for your help getting her registration corrected!

Image of Blair Besten and Miguel Santiago is ©2018 MichaelKohlhaas.Org and it’s a small plate locally sourced and house made from this crazy little nightmare.