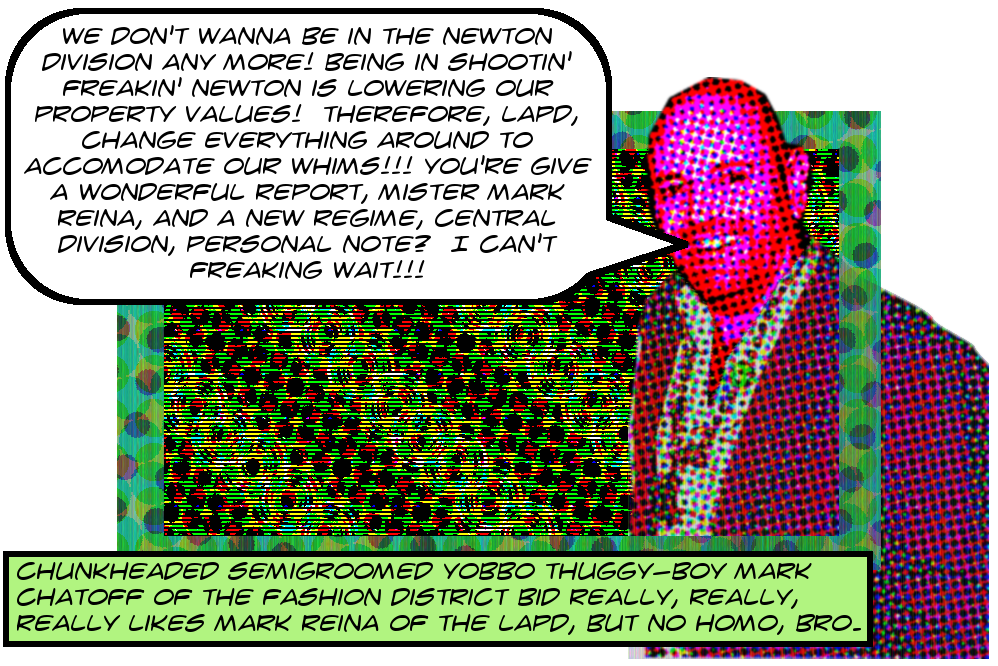 Today I rode the good old Metro Line 45 North on Broadway to the freaking Fashion District BID board of directors meeting. And all I have to say to you all, my loyal readers,1 is that if you enjoy reading this blog, you owe me freaking big time for the crapola I sit through on your behalf just so we can all get a little giggle and a little spine-chill from the weirdly tedious yet terrifying antics regularly to be experienced at these people’s damn meetings.2

So I did record the entire damned meeting, and you can watch it here on YouTube and if you care about freedom at all you can also watch it here on Archive.Org. The whole thing was essentially as tedious as one might expect, with most of the interesting action taking place before the meeting was convened, so I didn’t get it on tape.3

But it wasn’t all a waste of time! Most interestingly, LAPD Super Duper Cop Mark Reina gave a long update on plans to shift the Northern boundary of Newton Division so that the Fashion District will lie entirely within the Central Division. You can watch and listen here, and turn the page for some discussion.7 Also, be sure not to miss aggressively splenetic crackpot Linda Becker aggrievedly announcing to the world that the meeting was being recorded8

So here’s the issue Mark Reina was talking about. Most of the zillionaire-infested parts of Downtown are in LAPD’s Central Division which, therefore, presumably has extensive experience catering to the whims of zillionaires and their flunkies in an acceptably sycophantic manner.9 However, much of the Fashion District is in Newton Division, which runs between the 110 and Alameda Street or Central as far South as Florence with a little Northeastern nubbin tacked on below Seventh Street between San Pedro Street and the river.

Presumably this was all OK in the past when there weren’t any zillionaires in the Northern tip of Newton, but now that there are, and given that the cops in Newton are more known for killing unarmed human beings and being called out in righteously angry rap music than they are for laughing it up with white supremacists about how fucked up South LA is and other such zillionaire-whispering tactics, given that, it seems that the local zillionaires bitched and moaned enough that the top-floor geniuses at 100 W First Street decided they’d better get moving and placate the seething mob of rich white people.

And I don’t know exactly what the zillionaires are expecting to get out of this shift, maybe it actually is more zillionaire-friendly cops. Maybe it’s a better image than can be had being located in Shootin’ Newton.10 Who knows what zillionaires are thinking? But whatever they think they’re going to get, they sure are freaking overjoyed about it. I mean, just catch a listen here as chunkheaded yobbo needs-a-damn-shave thuggy-boy board president Mark Chatoff waxes all lovesy-dovesy right up in Mark Reina’s lap:

That’s a wonderful report. We’re looking forward to the new regime, like I said, the new regime, the new Central Division, I can say it from a personal level, I can’t wait. [nervous, sycophantic giggling] I’m waiting, but … [all-pervasive laughter for incomprehensible reasons]

And really, imagine what a difference it might make in people’s lives in this City if we could all choose the cops who’d patrol our neighborhoods. If we could just say, well, this bunch of cops isn’t working out because they keep killing us when we step out of the house for milk, so please get busy up there on the eleventy-seventh floor of LAPD headquarters and work out a plan so we can get the same cops they have in Bel Air or Pacific Palisades or Brentwood freaking Village or some other neighborhood where the police wouldn’t dare to shoot an unarmed kid dead in the street. But of course, that privilege isn’t for the rest of us, is it?

Oh, and I almost forgot! What about aggressively splenetic crack-freaking-pot Linda freaking Becker and her warning to her co-conspirators that they were speaking on the record: “And I would just like to make an announcement. I think we should all be aware that this meeting is being videotaped. I think it should be disclosed.” Disclosed indeed, Linda Becker!

Well, as Mom used to say,11 if you don’t have something to hide why would you care? Worried that you’re going to say something on camera you’ll regret for the rest of your life, like jittery little psychopath Carol Massie of the late, lamented Sunset & Vine BID did that one time? It could happen, Linda Becker. Why not learn how not to be such a freaking racist, then?

Or maybe you’re just worried that your mishandling of the BID renewal process will be exposed despite the underhanded and unprofessional attempts of your flunky Rena Leddy to shield you? Maybe just don’t take jobs you can’t do or get a higher class of flunky? Or maybe it’s a zillionaire thang I wouldn’t understand. Anger that I’m exercising my constitutional right to film you and your cannibal friends? If this inconsequential exercise of my constitutional rights bothers you to that extent, you’re going to be way more unhappy in the future, friend. You can bet on that, Ms. Linda freaking Becker.

Got the picture of Chatoff here, messed with it, out it popped proudly wearing a ©2018 MichaelKohlhaas.org. Fight me.