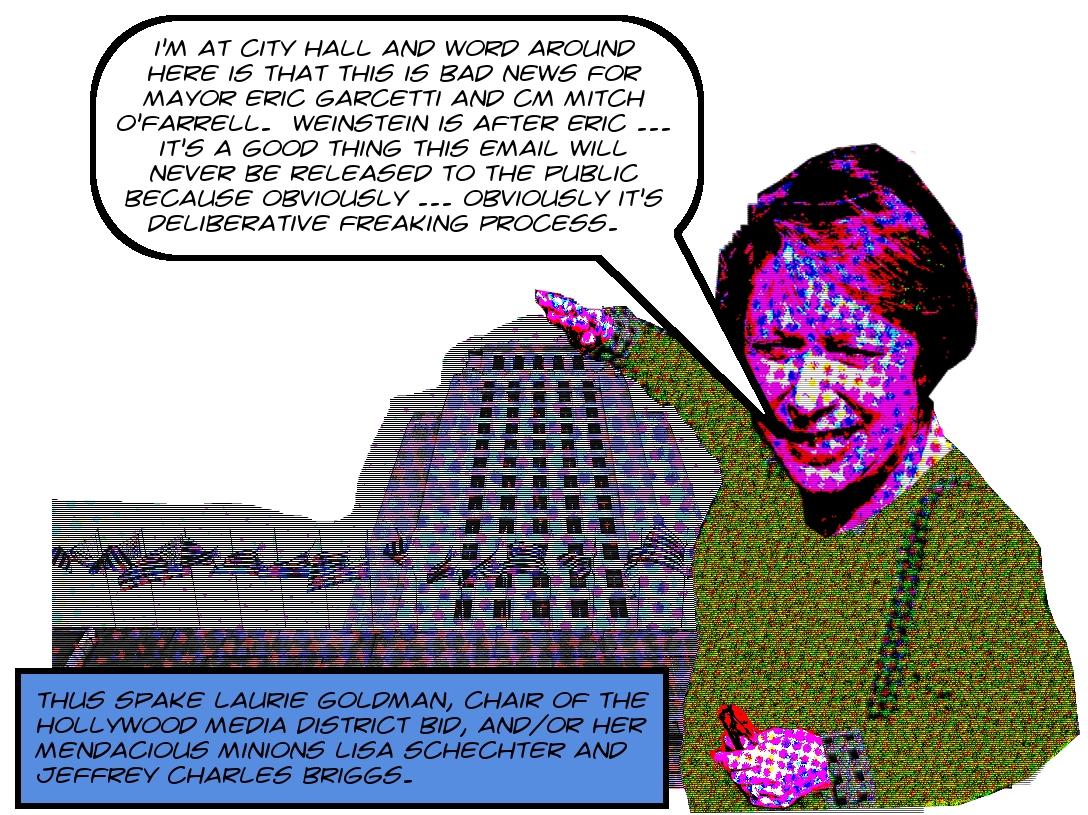 For extra behind-the-scenes CPRA thrills, compare them to Jeffrey Charles Briggs’s summaries and aggressively hallucinated exemption claims in the declaration and log he filed with the court. And turn the page for a detailed analysis in a couple of cases of just how deeply, arrogantly nonsensical these exemption claims are revealed to be once we can compare them with the actual emails.

So maybe you remember that in 2016 the Neighborhood Integrity Initiative was a huge deal. It was sponsored by Michael Weinstein of the AIDS Healthcare Foundation and the campaign was run by Jill Stewart. Originally the proponents were working to get it on the November 2016 ballot, but ended up changing their minds and placing it on the March 2017 ballot.

When she discovered this switchup on March 15, 2016, Media District Board President Laurie Goldman popped off this poppy little email to some of her colleagues at the BID, namely Executive Director and noted flouter of Governmental Ethics Laws Lisa Schechter and board members David Bass, famous for having sued the Greater West Hollywood Food Coalition in 2011 for having the temerity to feed human beings on a public street, and Ferris Wehbe, who has something mysterious to do with Hollywood’s famed Little Red Schoolhouse:

FYI, NNI [sic] has been moved to the March 2017 City ballot. I’m at City Hall and word around here is that this is bad news for Mayor EG & CM MOF. Weinstein is after Eric….

Forget about the moronic content of the email, its poserism, its bathetic gossipy pretense of being in with the in crowd over at 200 N. Spring Street, forget all of that. Forget that Laurie Goldman calls our bobble-headed mayor “Eric” even though everyone knows Kerry Morrison is his BIDdie of choice.

Forget all that nonsense and just consider the fact that Jeffrey Charles Briggs, señor super abogado de Hollywood mismo, actually claimed in an actual sworn declaration, filed in actual Los Angeles Superior Court before an actual real life judge, that this little slice of floof was actually exempt from production because it’s part of the damned BID’s damned deliberative freaking process. Here, in fact, is what he said:

To which the only sane response is something along the lines of “are you freaking serious, attorney Briggs?!!?” After all, as the invaluable guide to this kind of nonsense published by RCFP states so clearly, “[t]o qualify for the privilege the document sought must be both predecisional and deliberative.” This is clearly neither.

And don’t doubt for an instant that Jeffrey Charles Briggs is serious. One way to tell that he’s serious is that this is in no way an isolated incident. Just feast your weary eyes on this discussion between BIDdies Laurie Goldman and Lisa Schechter about whose website they’re going to cop design elements from. Here are some highlights:

I love their website! Spend some time exploring – we should “steal” some ideas!

Jim Pugh, FHCP’s LU atty, is on Southpark Board – I’ve asked him for their bylaws.

And then a little later we get:

Very plain website, but the basics are great: http://www.figueroacorridor.org/

Now, I suppose that this discussion is predecisional. After all, Laurie Goldman is giving her opinions on whose websites they ought to rip off when designing their own. Clearly they haven’t yet decided whose websites to rip off. On the other hand, it’s not clear that this nonsense is deliberative. That is, are they actually having a serious discussion about whether they ought to steal design elements from the South Park BID’s website? It doesn’t seem likely that they’re actually deciding to steal web code, and if they’re not, then what is it that they’re deliberating over? Furthermore, the RCFP quotes some case to the effect that the key issue is:

… whether the disclosure of materials would expose an agency’s decision making process in such a way as to discourage candid discussion within the agency and thereby undermine the agency’s ability to perform its functions.

And how’s that going to happen here? They’re not even having a candid discussion. They’re just kidding around. Will revealing this email undermine their ability to perform their functions? On the one hand, given how completely illegitimate and creepy their functions are, I kind of hope so. But I just don’t see it happening. The BID will roll on even though it’s been revealed that Laurie Goldman approves of the designs of the websites of the South Park BID and the Figueroa Corridor BID. And thus is pretty hard to swallow, the claim of Jeffrey Charles Briggs to the effect that:

And that’s pretty much what I have for you. Anyone with any sense can tell that these people are pretty much lying every time they claim an exemption. We’re gathering more and more evidence that that’s true. Perhaps it’ll do the world some good in the future? If so, and probably even if not, you’ll hear about it here! Stay tuned…