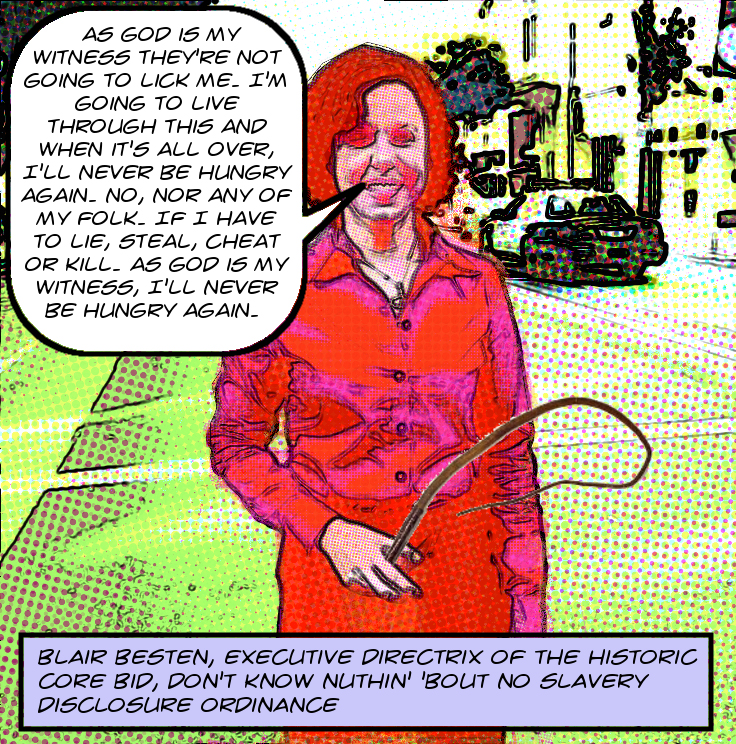 In 2003 the City of Los Angeles passed a Slavery Disclosure Ordinance,1 which, in short, requires most firms that contract with the City to disclose any profits they2 made from American slavery prior to 1865. The L.A. Times published a good contemporaneous summary of the issues, which is worth a read.

This measure was promoted by pro-reparations advocates as a (mostly) symbolic expression of the City’s opposition to slavery. It’s mostly symbolic in, first, that it only requires disclosure. In fact, the only actual tangible requirement of the law is that contractors complete a disclosure affadavit. No firms that profited from slavery are prevented from doing business with the City. Also, any number of types of firms are exempt from the law. An exhaustive list of exceptions can be found at §10.41.3.

Among these are, most crucially, financial institutions. Since banks, stockbrokers, and other such firms doing business in finance are likely either to have existed prior to the ratification of the Thirteenth Amendment or else to have acquired financial firms that were, and since every major business in the U.S. during slavery times made money from the stolen labor of slaves,3 this is no minor exception.

Another huge exception is that the law only applies to slavery in the United States before 1865.4 Of course, slavery in present-day Los Angeles is not only rampant, it’s not only tolerated, but is probably pretty acceptable, at least to elected City officials given the likely level of campaign contributions made by slavers. After all, it’s not poor people buying those slaves, and probably not politically uninvolved people, either. Just for instance, between them, modern-day slaveholders Ray and Ghada Irani have given more than $22,000 to various candidates.5 Given the obsessive contribution-seeking behavior of our Councilmembers, this is more than enough explanation for the narrow scope of the law.6

And finally, for whatever reason, §10.41.3(E) exempts 501(c)(3) corporations, and that brings us to this morning’s actual subject, which, believe it or not, is the Historic Core Business Improvement District.

It seems that once upon a time in 2016 the Historic Core BID was hired by CD14 repster José Huizar to create yet another goddamned parklet in Downtown Los Angeles. Of course, such a task requires a contract and a lot of discussion. You can read four full pages of the blither-blather here, replete with Blair Besten’s characteristic moaning, in this case to City employee Avak Sarafian, about how hard her professional life is:

“Yes, Avak that is true. However the form to fill out is not intuitive, as I said. No sense in filling out incorrectly and submitting, only to have it kicked back and delay further. You gave me an email with no contact person at ITA.BAVN.org to reach out to for assistance with this — after several attempts since December, I have still received no response. I cannot finish without guidance.”

Anyway, after Avak Sarafian and Blair Besten met in person in March of 2016, he sent her a current draft of the parklet contract along with a statement that: “It was nice meeting you today. I sent a message to Public Works asking them to review and approve the EBO EEO and SDO Exemption form.”7

Which brings us to the question posed in the title of this post. Why in the world is Avak Sarafian trying to get the Historic Core BID exempted from disclosing their slavery-derived profits? From the context of the email it appears that he discussed it with Blair Besten in person. Also, in this email from a few days later Avak Sarafian makes it clear that he was seeking the SDO exemption on behalf of Blair Besten and Huizar staffie Kevin Ocubillo who it seems was helping Blair Besten with all the paperwork by which she was so very overwhelmed and was unable to “finish without guidance.”:

Public Works rejected my attempt to file an exemption from the Slavery Disclosure Ordinance on behalf of your organization. They are implying that the exemption can only be granted for 501c3 non profits and not 501c6 non profits.

Please complete the enclosed SDO Affidavit and upload it to your LABAVN account. When it’s done, please let me know so that I can notify Public Works.

Naturally I will forgo the opportunity to mock Avak Sarafian for not knowing what the word “implying” means. The SDO states super-clearly that only 501(c)(3) organizations are exempt, so there would be no implications involved. And neither is it surprising that the HCBID was ultimately forced to file an SDO affadavit over this parklet business, because that’s what the letter of the law requires.8 But really, why was Avak Sarafian trying so hard to get the BID exempted from this far-less-than-onerous requirement?

It’s probably not that Blair Besten can’t figure out how to “finish without guidance” when it comes to this form. After all, the Property Owners Association that runs the HCBID has other contracts with the City, most notably their actual administration contract, which is number C-123420. An SDO affadavit was required as part of that contract, and it was duly completed and signed by none other than Blair Besten herself.

It’s almost certainly not the case that the HCBID acquired some source of slave-derived profits between 2013 when their first SDO affadavit was signed and 2016 when they were trying to get out of signing another one.

It’s probably not the case that Blair Besten and her racketeer-inluenced and corrupt puppet masters at the HCBID realized in a rare moment of clarity that, whether or not they made money from the slave trade prior to 1865, they were making a fortune out of Skid Row by running it like a cotton plantation. Their behavior is in many ways the moral equivalent of profiting from slavery, but this is something which BIDs in Los Angeles are famous for not understanding about their own activities, so it’s probably not that.

That’s a bunch of stuff it’s probably not. So who knows what it probably is? The evidence stops here, but I’m going to speculate that it’s arrogant zillionaire white privilege. That seems to be enough to explain most of the BIDs’ ultra-presumptuous ultra-exceptionalism, after all.

Image of Blair Besten is a highly transformative sarcasm-laden reworking of this thingie from the Downtown News. It is now, due to the artistic labors with which I have imbued it, sea-changed it, full-fathom-fived it, and so on and on, ©2017 MichaelKohlhaas.Org.