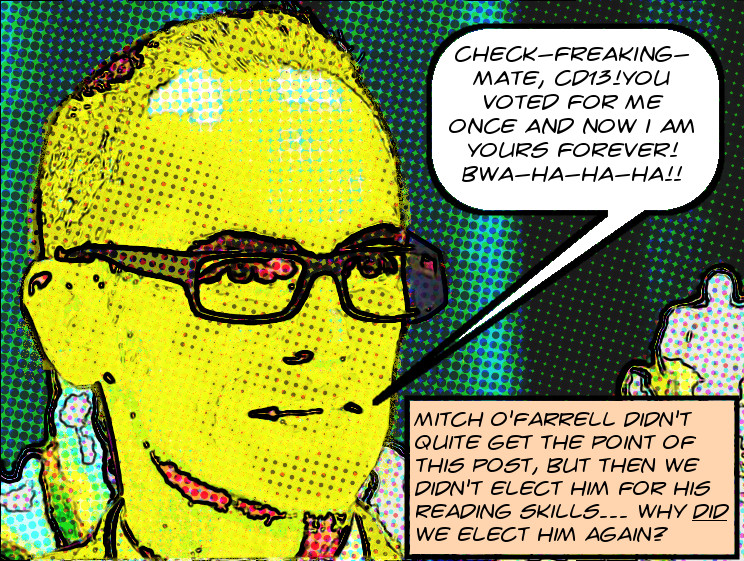 I’m presently working on a number of fairly involved projects which relate to the establishment and renewal processes for BIDs. There’ll be more news on that later, but, tangentially, in the course of my research I’ve noticed that BIDs that are up for renewal tend to state the fact in their Annual Planning Reports (“APRs”). Just for instance, here’s the Fashion District’s 2017 APR. In there, on page 3, you can see BID renewal under the heading “Management/City Fees (Zones 1-9): $487,795.00 (10.67%).”

It’s only recently that I’ve come to understand the importance of these APRs. First of all, BIDs in California are required by State law to produce them. According to the Streets and Highways Code at §36650(a):

The owners’ association shall cause to be prepared a report for each fiscal year, except the first year, for which assessments are to be levied and collected to pay the costs of the improvements, maintenance, and activities described in the report.

In the laconic dialect of the law, this seems to say that assessments are to be spent on “improvements, maintenance, and activities” if and only if they are listed in the APR. This is one reason these APRs are essential to understanding the operations of BIDs. They’re explicitly forbidden from spending money on matters not listed in the APR and they’re explicitly required to carry out matters that are listed. This is possibly part of the reason why the City exercises hyperspecific control over the content of APRs even as they categorically refuse to exercise any control whatsoever even over overt malfeasance by BIDs.

And elsewhere in the law, specifically at §36622(k)(2), we find a statement of the infamous “special benefits” requirement for property-based BIDs:

In a property-based district, the proportionate special benefit derived by each identified parcel shall be determined exclusively in relationship to the entirety of the capital cost of a public improvement, the maintenance and operation expenses of a public improvement, or the cost of the activities. An assessment shall not be imposed on any parcel that exceeds the reasonable cost of the proportional special benefit conferred on that parcel. Only special benefits are assessable …

But, interestingly, all the “improvements, maintenance, and activities” to be paid for by the BID are at least in outline approved by the property owners at the time the BID is created or renewed. The Streets and Highways Code at §36622(d), requires that

The management district plan shall include … The improvements, maintenance, and activities proposed for each year of operation of the district and the maximum cost thereof.

This Management District Plan (“MDP”) is a requirement for BID establishment or renewal. It’s what the property owners vote on when they vote to establish or renew. In other words, the activities that BIDs can spend assessments on, the special benefits, are determined at the outset of the BID. So the voters who vote to establish or renew a BID are asserting by their vote that the renewal of the BID is a special benefit, and they are doing so even before there is a BID for them to benefit from.


It’s hard to see how this makes sense. Like, imagine that, if when we voted for yet another useless Councilmember, at the same time we were voting for the proposition that we would benefit from the reelection of this not-even-elected-yet useless Councilmember in the future. If the latter proposition were binding and were repeated in subsequent elections, we’d effectively be electing the candidate to serve for all time, which would be some kind of paradox.

Of course, this can’t actually happen. Present voters can’t bind future voters to anything, and rightly so. Thus, in this imaginary scenario, voting for the proposition that the not-yet-elected candidate should be reelected has no effect. It’s doesn’t matter if the proposition is approved or not.

But this is precisely where the problem arises. A proposition that has no effect on anything can’t possibly be a benefit to anyone. Not a special benefit. Not a general benefit. No kind of benefit at all. So how is it that BIDs are allowed to spend their assessments on renewal, then? As usual, I don’t know. But it’s at least plausible that they shouldn’t be allowed to do so.

Image of mirrors and hands is released under the CC BY-NC-ND 2.0 by its creator, Azarius, who has graciously made it available via Flickr. Image of Mitch O’Farrell was glommed from the LA Times and transformatively reimagined by me, your host, to the point where it is now ©2017 MichaelKohlhaas.Org.