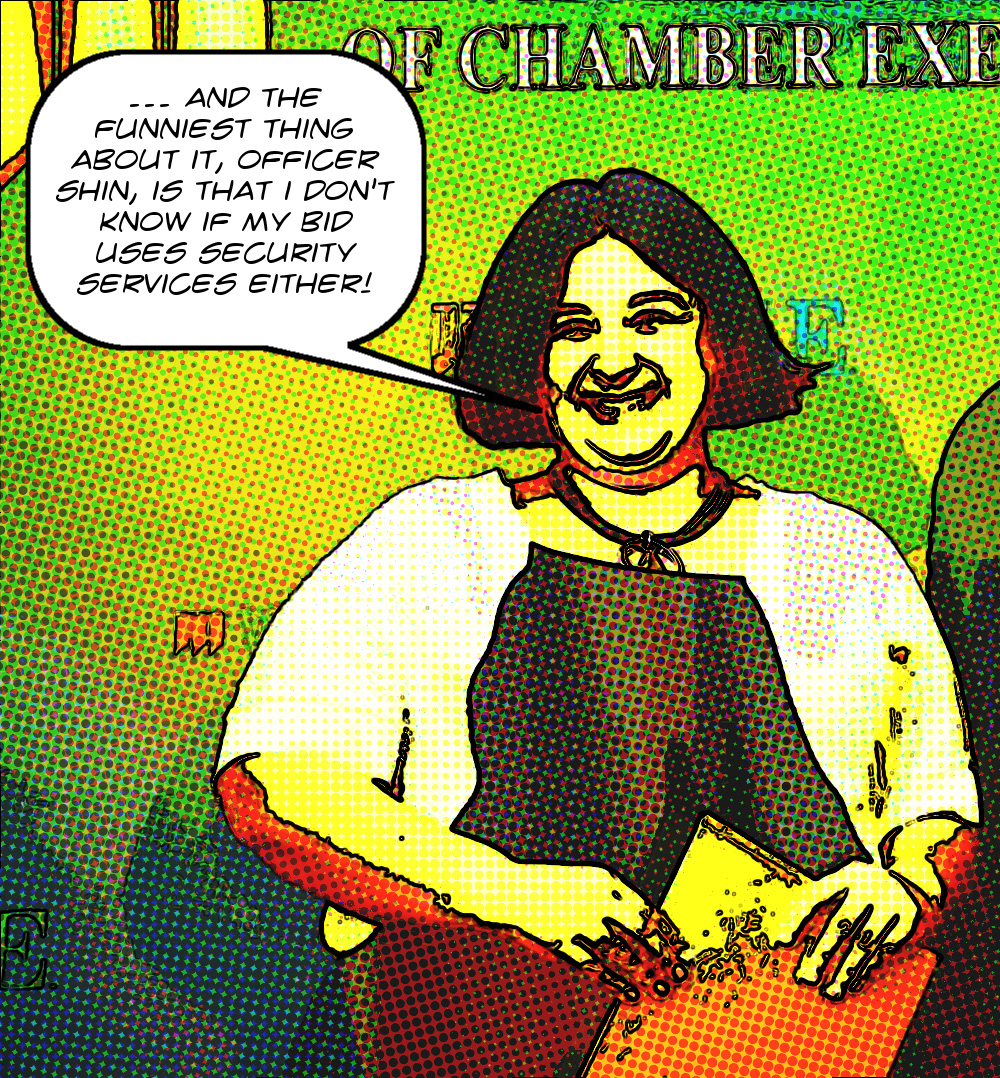 You may recall that late last year, on the basis of my complaint to the Police Commission, the City of LA resumed enforcement of LAMC 52.34 against BID security forces.1 Since then it’s been possible to track the progress of this massive project via various CPRA requests. So in November 2016 the Police Commission informed all BIDs of the registration requirement and, at the same time, told them that their BID patrollies would be subject to arrest if they didn’t submit. In December 2017 the Police Commission told the BIDs to quit whining about it because the law is the law.

Well, just yesterday, as part of a larger release of records from the East Hollywood BID, I discovered a February 2017 email from Eugene Shin to Nicole Shahenian. Eugene Shin, as you may recall, is the Police Commission investigator that’s heading up the registration project. Nicole Shahenian is the Executive Director of the East Hollywood BID. The email confirms that not only is registration still ongoing, but that the Police Commission is pursuing it fairly aggressively. Turn the page for a transcription and some discussion.

First of all, here’s what the email says:

Hello, I’m Officer Shin with the police commission and need to verify if your BID uses security services. If so, can you please let me know which security company ASAP as the Los Angeles Police Commission determined that they will require commission permits through us. Please call or email me. Thank you for your time.

The most important lesson to be learned here is that, as I said above, as late as February 2, 2017 the registration of BID security is ongoing. And it’s not surprising that if any BID operators were going to be remiss in dealing with the process, Nicole Shahenian was going to be amongst them. After all, she’s famous for duty-shirking, e.g. in her failure to submit legally required newsletters to the City for four fricking years. But journalistic ethics and basic fairness2 require some checking into matters. Like does the East Hollywood BID even have a security patrol?3

Well, the first place I looked, which was the BID Services page of the EHBID’s website,4 suggests that the EHBID does, in fact, operate security:

What services does the BID provide? The BID finances services that are over and above the basic services provided by local government. These services include uniformed Safety Patrols on bicycles and in our own Security vehicle and litter pick-up, sidewalk scrubbing and graffiti removal by uniformed Maintenance Teams.

On the other hand, I couldn’t recall having seen BID security out there in the EHBID, and I couldn’t recall any discussion of BID security in the EHBID records I’ve read,5 so I thought I’d check further. As you may know, BIDs are required by the Property and Business Improvement District Law of 1994 to submit annual planning reports to the City explaining exactly what they’re going to be spending their money on. So for instance, look here at their 2016 planning report. There’s no mention at all of security services, and they’re not allowed to spend money on stuff that they don’t say they’re going to spend it on in this report.

However, for various reasons, these annual reports don’t always seem like the most reliable sources of information. Thus I resolved to look at some of the EHBID’s quarterly newsletters. However, none of these mention security at all. And in fact, it turns out that the newsletters have a quite different description of BID services:6
What services does the BID provide? The BID finances services that are over and above the basic services provided by local government. Services provided by the East Hollywood BID include litter pick-up, sidewalk/bus-stop power washing and graffiti removal by uniformed Maintenance Teams.

No mention at all of security. So does the EHBID have security or does it don’t? The proper answer is “who knows?!” But if they do, thank goodness, their security must now register with the cops!

Image of Nicole Shahenian is ©2017 MichaelKohlhaas.org. It’s based on an image from the website of the Hollywood Chamber of Commerce, which is available here.