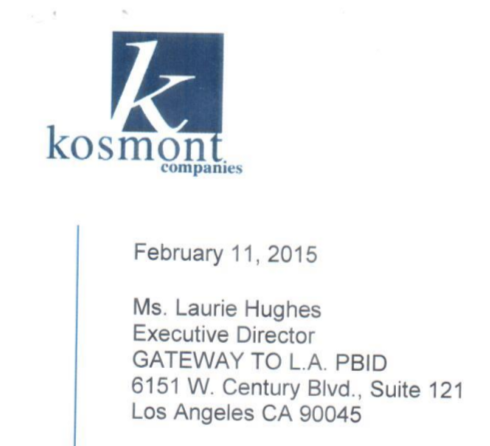 We’ve been discussing BID consultants a lot recently because of shadowy BID consultant Tara Devine and the fact that it looks so much like BID consultancy satisfies the LAMC’s definition of lobbying that it’s very likely that she broke the laws requiring registration, causing me, in the throes of a well-developed sense of civic duty, to report her transgressions to the Ethics Commission and then again to report some associated transgressions to Mike Feuer. What will come of these matters no one can now know, of course, but one aspect that troubled me slightly is the apparent novelty of the charges. That is, all the BID consultants I knew of at the time weren’t registered. This doesn’t mean they don’t have to register. After all, consider what happened with BID security and the Police Commission as a result of our reporting. But nevertheless, one never wants to be the first to make an argument if it’s possible to avoid it.

So imagine my pleasure in discovering that, first, the famous Gateway to LA BID, one of Mike Bonin’s babies out there by the Airport in CD11, renewed for 10 years in 2015, and they used a BID consultant named Larry Kosmont to handle the process for them. And second, that Larry Kosmont was not only registered as a lobbyist during this process, but that he specifically, explicitly, disclosed his work for the Gateway BID to the City and specifically, explicitly listed the City Clerk as one of the City offices he’d lobbied in furtherance of the renewal project. This is going to make it a lot harder for Tara Devine and her defenders, if any she has by now, to argue that it never occurred to anyone that BID consultants were lobbyists and therefore subject to registration. Turn the page for links to all relevant documents!

And finally, if one adds up the payments made by the BID to Kosmont over the three years that the BID renewal was ongoing, it comes to $95,619.43. Given that Kosmont was working on another project for the Gateway BID at the same time and it doesn’t seem to be possible at this stage to disentangle the payments for the two,1 it’s pretty interesting to note that this is in line with our current best estimate of $80,000 for a BID establishment/renewal consultancy gig.