Wikipedia is a perfect source for information about James Edgar Davis, erstwhile Chief of the LAPD and, amongst his chiefly peers, tied for second place with Daryl Francis Gates, the two of them behind only William Henry Parker III when ranked by sheer, unrelenting, untempered, unexcused, unreflected-upon, psychopathic brutality. James Davis was famous for letting not truth, not justice, not love, not mercy stand in the way of the almost visionary level of violent frenzy up to which he kept his troops constantly whipped. Most stuff on Wikipedia is made up and a lot of it is harmful. The people that work for Wikipedia are mostly petty tyrants, sadists, and torturers, convinced that their evil is done in the service of a greater good because their insane leader told them that was the case. The same story is true the reign of James Davis as Chief of the LAPD as well.

Davis’s crazed antics were so reprehensible that even his official LAPD bio has to acknowledge this reality in surprising detail. It’s worth reading the whole thing and, as well, reading Joe Domanick’s fine history of the LAPD up through the Spring of 1992, To Protect and Serve: The LAPD’s Century of War in the City of Dreams, to understand the role that Davis’s lunacy incarnate prepared the way and made the paths straight for both the 1965 and the 1992 popular uprisings. We’re concerned here, though, with only one essential aspect of Davis’s legacy: The Red Squad. Read from the contemporary LAPD’s statement on the matter:

With his return to office in 1933, Chief James E. Davis deployed a “Red Squad” to “investigate and control radical activities, strikes, and riots.” By today’s standards, the Squad’s tactics were intolerable, but its members had the blessing of government officials and the business community. In referring to individuals deemed subversive, one Police Commissioner voiced his views by declaring: “The more the police beat them up and wreck their headquarters, the better. Communists have no Constitutional rights and I won’t listen to anyone who defends them.”

The Los Angeles red squad was above all characterized by an undiluted nativism and a blatant patron-client relationship with local business interests, which was openly proclaimed against the local labor movement over the years…1

Well, these days, the LAPD can’t spy on political dissenters any more, and plus the “local labor movement” was, at least until the phoenix-esque rise of SEIU and its ideological kin, pretty much burnt/napalmed/incinerated by “local business interests.” But all that red squad apparatus didn’t just vanish. As with so many of the tools of oppression forged by the white ruling classes of Los Angeles in the Twentieth Century, political surveillance of citizens engaged in entirely legal activities was transferred over to and/or eagerly taken up by Business Improvement Districts, who have subsumed most of the municipal functions related to the “intolerable…by today’s standards…” “blatant patron-client relationship with local business interests…” Read on for a host of examples of the BID Patrol spying on the citizens of Hollywood for purely political reasons and, Stasi-like, keeping creepy files full of the fruits of their voyeurism-under-color-of-law.
First up we have an A/I file photo of some guy taking a picture of BID Patrollies who are “Code 5” in the parking lot of Taco Bell. According to Wikipedia, Code 5 means engaged in covert surveillance. One has to wonder how covert they’re being if some guy is taking their picture, but more importantly, why is it that they think that having their picture taken is worthy of recording and filing away? Obviously it’s not illegal for them to do this, but there’s no good law-enforcement reason for it. Not only that, but, as we’ve seen with James Davis’s LAPD red squad, there’s a long, nasty history in Los Angeles of cops spying on people. As the LAPD now says, these tactics are intolerable. And it’s not an isolated incident.
Next up we have a guy whose BID Patrol surveillance file photo reads ‘SUBJECT RAN UP TO BID OFFICERS DOOR AND STATED “AREN’T YOU PRIVATE SECURITY. STOP HARASSING THE HOMELESS”‘ We can find even more information on this spying in Steve Seyler’s July 2013 report to the Joint Security Committee, wherein it is stated:

On 7-24-13, our Officers Coogle and Ayala were asking the homeless Eva and her boyfriend Jonathon (AKA Blaze) to wake up and move off the public sidewalk. A man named Jeffrey then walked up to Officer Coogle who was sitting in his vehicle. He stood very close, even thrusting his head inside the window causing a potential Officer Safety issue. He was very agitated and yelled that the Officers were harassing the homeless and as security guards, they had no right to do so. A Supervisor was called to the scene.
Jonathan and Eva then spoke to Jeffery telling him to leave the Officers alone as they were just doing their jobs. They also told him that we act as their alarm clock. Jeffrey was not convinced and he continued to berate the Officers. He calmed down after hearing about the outreach that we provide to the homeless and it turned into a positive contact. It was nice to have our homeless sleepers stick up for us despite the many negative contacts we have had in the past.

Note well that Steve Seyler mentions that this guy was “…causing a potential Officer Safety issue.” That’s secret police-lingo code for someone who’s legally killable by them. Not only does the BID have its armed minions spying on the residents of Hollywood based on their politics, but, like the Davis-era red squad they emulate, they’re setting them up to be killed should it become desirable to their masters, the Hollywood Property Owners Alliance. Another clue to the BID Patrol’s possible intentions here can be found in the name of the file, which is “415 male (7-24-13)- stop harr. the homeless.jpg”. Steve Seyler is famous for putting the crimes for which his victims were arrested into the names of their arrest images. As far as we can tell this guy was not arrested, but look at 415 PC! It’s disturbing the peace. Does Steve Seyler really think he’s gonna charge someone with disturbing the peace for yelling at a security guard? Delusional!
And also note that Steve Seyler, whose officers Coogle and Ayala were not only bearing firearms when this happened, but have, somehow, the legal right to use them to shoot everyone if they see the chance for spinning a good enough story about it, seems actually to believe that “Jonathan and Eva” are going to tell the truth about anything right then. Like many aspects of Steve Seyler’s life and career, this would be almost touching if it weren’t so fricking psychopathic. Everybody knows, and we have discussed it before, that powerless people when threatened with violence will say whatever the threateners want to hear. And Steve’s nauseating admission that “[i]t was nice to have our homeless sleepers stick up for us despite the many negative contacts we have had in the past” shows that Jonathan and Eva hit exactly the right note. Why Steve Seyler thinks this has fuck-all to do with the truth we don’t understand. Kerry Morrison is famous for the same kind of pathetically idiotic naivete.
Next, we have the case of some guy named Eric. He’s pictured to the right in 2012, in a file obtained for us under the California Public Records Act entitled 4-12-12-ERIC-SPYING-2.jpg. There’s no indication in any of Steve Seyler’s reports about why the BID Patrol was taking pictures of this guy or why they’ve saved them for more than three years, but there are an awful lot of these pictures. These two of him in a window were taken in April 2012, one on the 12th and the other on the 25th.
That’s two weeks of surveillance right there. And not only that, but look! They followed the guy around and took pictures of him on the freaking street. Was he breaking a law? Call the cops. Do something. But what explains this weirdo obsession? Probably Steve Seyler could tell us, but he won’t. Note that these images seem to have been taken in January 2012, for a grad total of no less than four months spying on some guy in Hollywood. 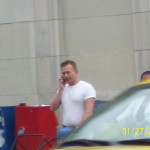 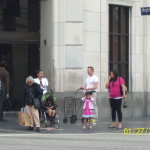 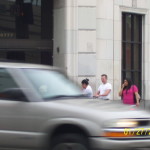 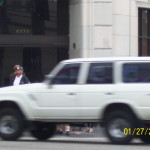 Finally, the BID Patrol has spent endless hours over the course of years and years and years spying on anyone who has the nerve to give food to homeless people in Hollywood. They can’t stop them because this is perfectly legal to do, so instead they take pictures. We have literally hundreds of these. We’ll be making them available soon, and you can find many but not all in our Archive.org collection. We’ll finish this off with a small sample. Click thumbnail for full-size file. 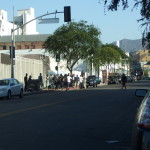 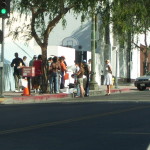 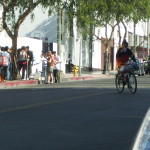 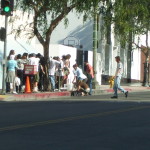 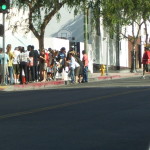 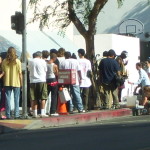 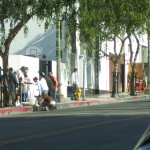 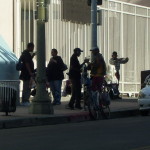 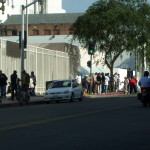 So yeah, that’s what your friendly neighborhood armed BID Patrol minions are doing. They’re taking photos of people who express dissent, who exercise their constitutional rights, who just exist in Hollywood in a way that the HPOA doesn’t like. In the early Twentieth Century the LAPD handled this kind of bullshit for the zillionaires of the city but that’s no longer possible after the riots that that kind of evil spawned forth. Thus the city has handed the evil back to the zillionaires via their front organizations the BIDs. And on and on it goes.

Image of James Davis and woman from 1931 is probably out of copyright, but in case not, we’re claiming fair use. It’s via USC Digital Library. Spy images are all public records, and so public domain in the great state of California. We got them by asking Kerry Morrison nicely and you can too! The image of happy slaves on a plantation is in the public domain and we got it via Wikimedia.