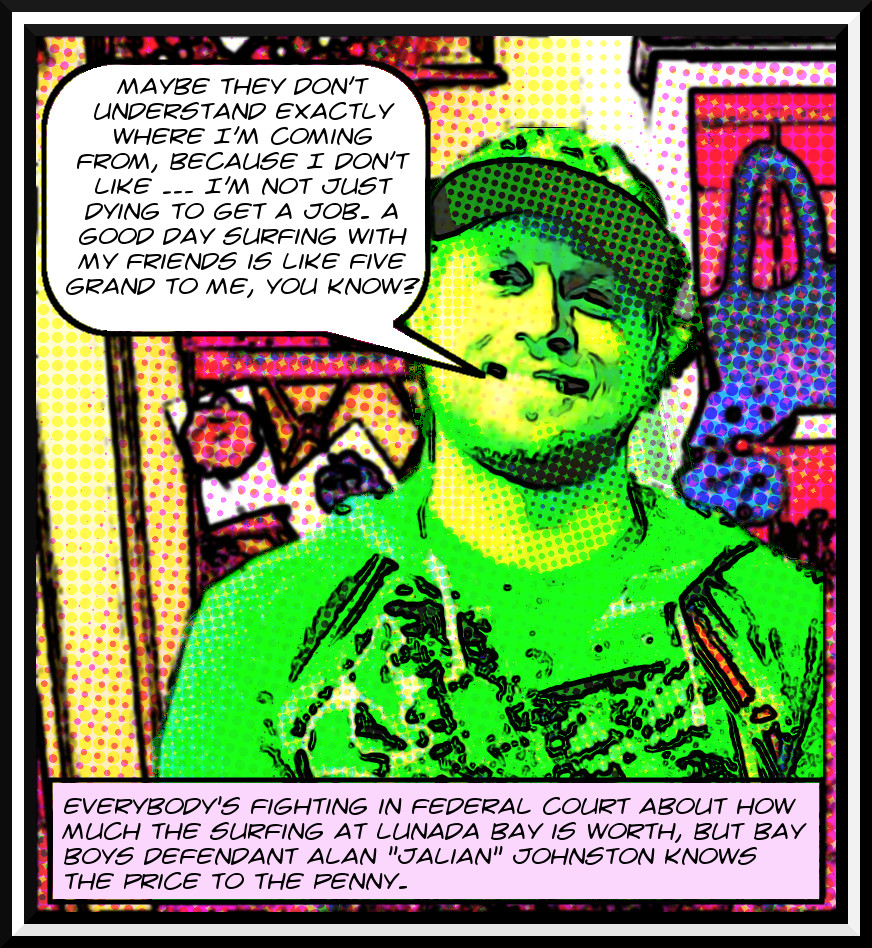 Jalian Johnston, of course, is more than just a non-member of the County’s most famous nonexistent surf local nongang. He is also a make-believe poor boy who “likes to live as if he were penniless,” and, additionally, a dedicated crafter who sells his world-famous crafts at local souvenir shops. He is also the proud possessor of a Zonker-Harris-esque surflosophy, proudly propounded in that linked-to article which, also interestingly, turns out to essentially subvert a crucial element of the defense of the case:
END_OF_DOCUMENT_TOKEN_TO_BE_REPLACED

Perhaps you recall that yesterday’s scheduled hearing on the plaintiffs’ motion to have their lawsuit against the putative Lunada Bay Boys certified as a class action was cancelled by the Judge on the grounds that he would be able to rule without hearing oral arguments. Well, this morning his order denying class certification hit PACER. I can tell you right now that his reasoning with respect to the conclusion that this case cannot proceed as a class action is completely beyond my ability to interpret sensibly, so you’ll have to figure that part of it out yourself.

The introduction to the order strikes me as pretty skeptical of the plaintiffs’ claims generally, and even a little sarcastic. For instance, in what must be for the plaintiffs a particularly disconcerting example of judicial humor, Otero begins his summary of the facts with the following pun: “Riding the wave of the Point Break remake, Plaintiffs initiated this putative class action lawsuit…” It can’t be pleasant to read insinuations from the judge that one’s lawsuit was essentially a movie tie-in! There are excerpts after the break.

Otero also responded to ongoing debate over plaintiffs’ expert witnesses by saying that the economist Philip King is certainly expert enough, but that his method of arriving at an estimate of $50,000,000 in damages is nonsense.1 It seems to be that King will be allowed to testify but not testify to damages. Also, Otero says that the plaintiffs’ other expert, Peter Neushul,2 is certainly expert enough to testify about surfing in Southern California. Anyway, after the break, find some excerpts from the less technical parts of the order.
END_OF_DOCUMENT_TOKEN_TO_BE_REPLACED

Oh boy! No doubt you recall that in January, the plaintiffs filed a declaration of Philip King in which King, a professor of economics at San Francisco State who studies coastal recreational economics. King made a preliminary calculation of the economic damage caused by the aggressively psychopathic surf localism of the Lunada Bay Boys at around $50,000,000 since 1970.

Well, a couple weeks ago some of the defendants, namely the City of Palos Verdes Estates and their fine upstanding police chief Jeff Kepley came back on the plaintiffs with a bunch of pleadings claiming that Philip King didn’t have the first idea what he was talking about and asking the court therefore to toss out his declaration and stuff. Tonight the plaintiffs responded with three new items arguing against this and also accusing the defendants of practicing some kind of technical subterfuge on the court by filing a motion to strike and engaging in bad-faith meet-and-confers prior to filing the motion. Links and summaries after the break.
END_OF_DOCUMENT_TOKEN_TO_BE_REPLACED

This is just a short note to memorialize the fact that a bunch of paperwork was filed in the case of Cory Spencer v. Lunada Bay Boys. I have added the new material to the Archive.Org page (look for docket numbers 204 through 207). There are links to and brief descriptions of the new material after the break. Don’t forget to look at the plaintiffs’ responses to the defendants’ interrogatories, which aren’t always available to the public via PACER. In this case they were put on the record as part of a lawyer’s declaration. And also don’t forget that there’s an upcoming hearing on the plaintiffs’ motion to certify the case as a class action, scheduled for Tuesday, February 21 at 10 a.m. in Judge Otero’s courtroom 10C in the First Street Courthouse downtown.
END_OF_DOCUMENT_TOKEN_TO_BE_REPLACED